A bright fireball exploded over the Chinese city of Linyi, Shandong Province at 14:59 UTC on August 16, 2020 (22:59 LT). The event was captured on camera run by the Chinese Meteor Monitoring Organization (CMMO).

According to the CMMO's Linyi observation station, who captured the meteor, the object had a green beginning and a purple-red end.

"It illuminated the whole earth and shook the landscape with a loud sound," CMMO staff member Zhou Kun reported.

"This phenomenon has been observed at several stations in Shandong and Jiangsu provinces of China, accompanied by a large number of eyewitness reports."

According to Kun, the astronomical magnitude of the flash is estimated to be -20, more than 900 times brighter than a full Moon.

"If so, that would make it a rare fireball indeed," said Dr. Tony Phillips of the SpaceWeather.com. "According to a NASA computer model of Earth's meteoroid environment, a fireball of that magnitude could be a decade class event."

This is the closest near-Earth object to flyby Earth so far this year and the closest on record. 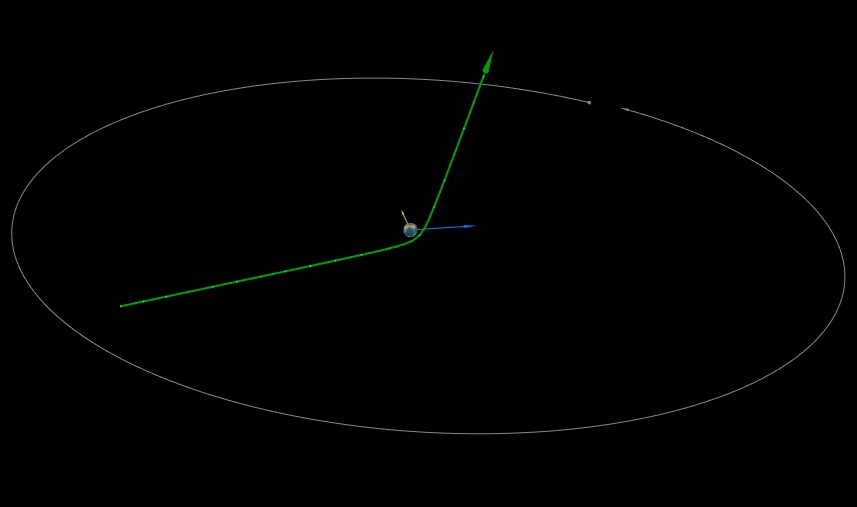 The green line indicates the object's apparent motion relative to the Earth, and the bright green marks are the object's location at approximately half-hour intervals. The Moon's orbit is grey. The blue arrow points in the direction of Earth's motion and the yellow arrow points toward the Sun. Credit: MPC

The object was first observed at Palomar Mountain–ZTF, California, U.S. on August 16, about 6 hours after its closest approach.