Hurricane "Isaias" is moving over the Bahamas on August 1, 2020, and is expected to approach the southeast coast of Florida later today and Sunday, August 2. On the forecast track, the center of Isaias will move near or over Andros Island in the Northwestern Bahamas this morning (LT) and continue to move near or over the rest of Northwestern Bahamas later today and move near the east coast of the Florida peninsula tonight through Sunday.

Isaias left more than 500 000 people without power in Puerto Rico and claimed at least 2 lives in the Dominican Republic where more than 1 100 homes were damaged.

The Hurricane Warning for the Central Bahamas has been discontinued.

A Hurricane Warning is in effect for Boca Raton to the Volusia/Flagler County Line, Florida and Northwestern Bahamas.

A Hurricane Watch is in effect for Hallandale Beach to the south of Boca Raton, Florida.

A Storm Surge Watch is in effect for Jupiter Inlet to Ponte Vedra Beach, Florida.

A Tropical Storm Warning is in effect for North of Ocean Reef to the south of Boca Raton, Florida, and Lake Okeechobee.

A Tropical Storm Watch is in effect for Volusia/Flagler County Line to Ponte Vedra Beach, Florida. 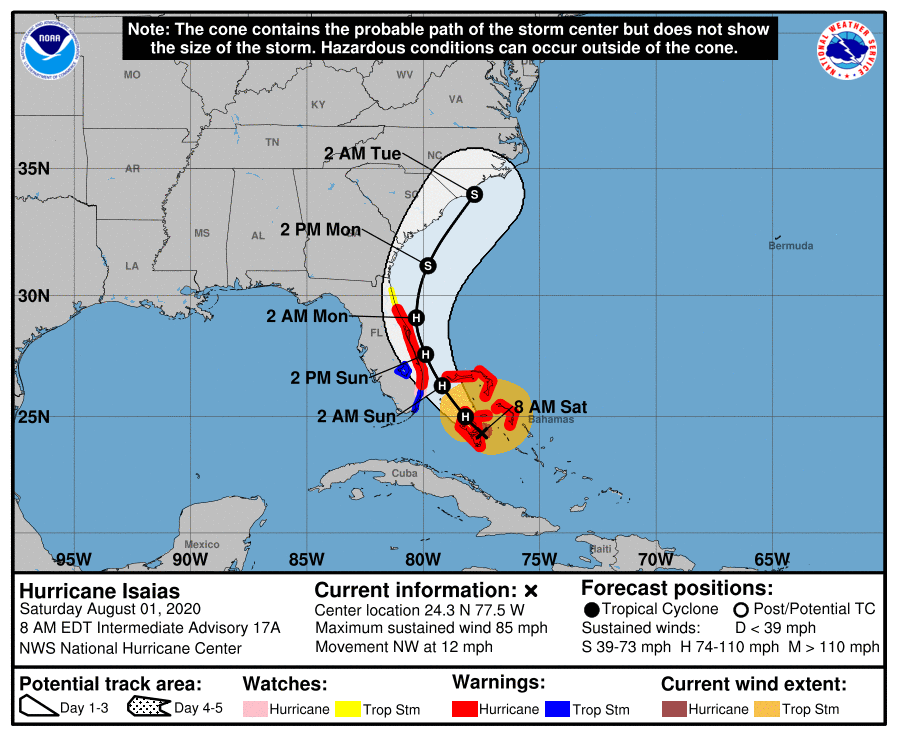 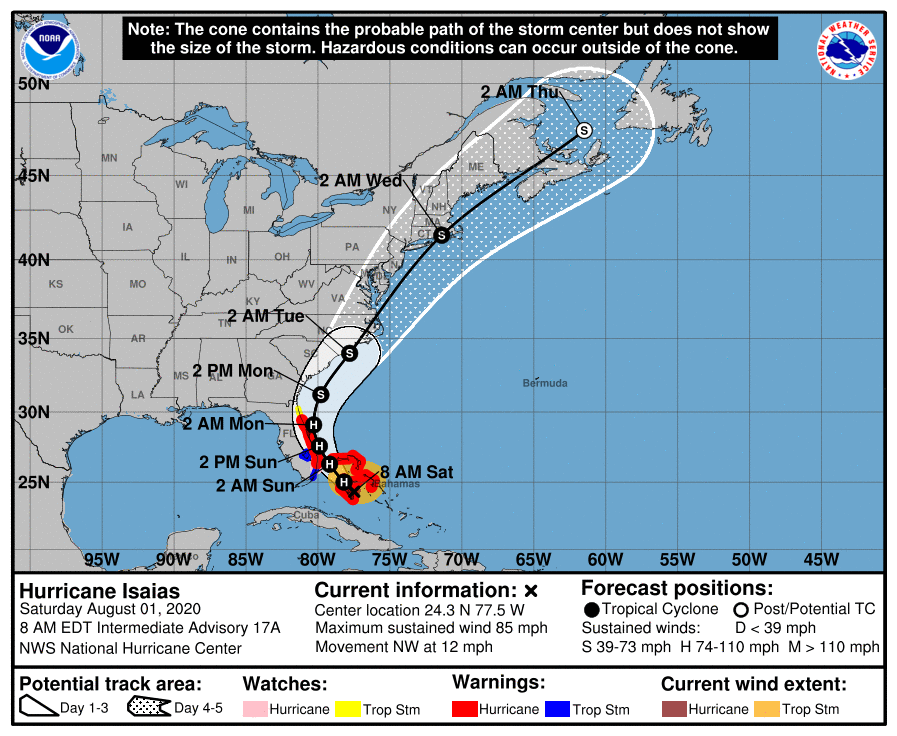 "Isaias has a somewhat ragged appearance in satellite imagery this morning, likely due to the impact of westerly shear and dry air entrainment," NHC forecaster Beven noted.

The area of central convection has shrunk in size, although radar data from the Bahamas shows some banding near the center and occasional attempts to wrap up an eyewall.

The cyclone is expected to continue its NW movement on the southwest side of a mid-level ridge today and begin to turn north-northwestward through a weakness in the ridge on Sunday.  It should recurve into the mid-latitude westerlies, with a turn toward the north-northeast and northeast with an increase in forward speed likely.

"The track guidance envelope has shifted a little to the east near the Florida coast and calls for a slower forward motion that the previous guidance," Beven said.

"Thus, the new forecast track has been adjusted a little east of, and slower than, the previous track. The hurricane is currently undergoing about 25 kt of westerly vertical shear, and some mid-level dry air is present west of the center."

This combination should prevent any more intensification, and, while Isaias is expected to remain a hurricane as it passes near the Florida coast, at least slight weakening should occur during this time.

Current indications from the global models are that the storm will continue to experience strong shear as it recurves, and thus the intensity forecast follows the previous forecast in calling for weakening during this time. 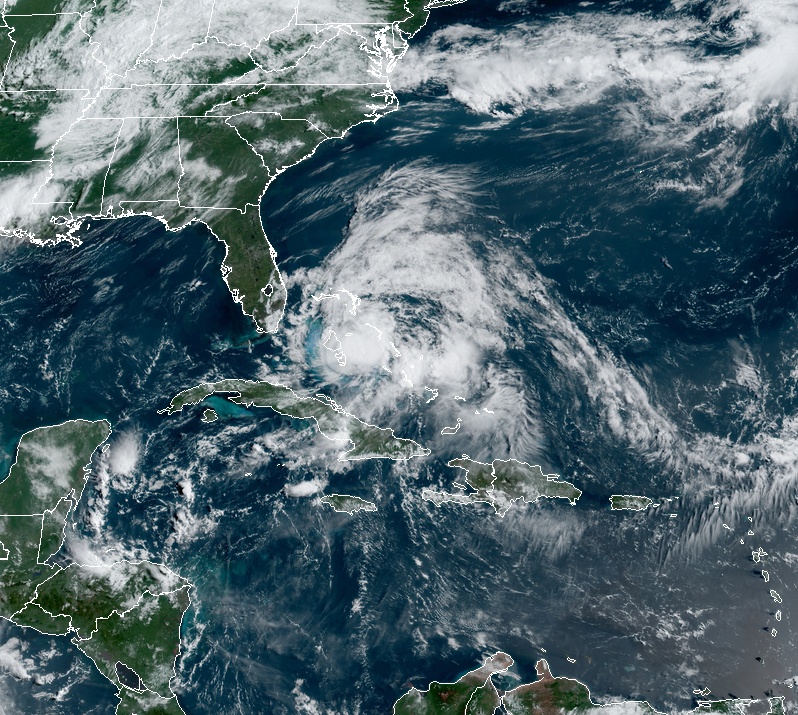 1. Hurricane conditions and dangerous storm surge are expected in portions of the Bahamas through Saturday, and Hurricane Warnings are in effect.

2. Hurricane conditions are expected along portions of the Florida east coast late Saturday and Saturday night, and a Hurricane Warning is in effect. Preparations to protect life and property should be rushed to completion.

3. Dangerous storm surge is possible along the Florida east coast from Jupiter Inlet to Ponte Vedra Beach where water rises of 0.6 – 1.2 m (2 to 4 feet) above ground level are possible along the immediate coastline and adjacent waterways. Residents in these areas should follow the advice given by local emergency officials.

4. Isaias will produce heavy rains and potentially life-threatening flash and urban flooding, especially in low-lying and poorly drained areas, across South to east-Central Florida, and across the Carolinas to the mid-Atlantic. Minor river flooding is possible across portions of the Carolinas and into Virginia early next week.

5. There is a risk of impacts from winds, heavy rainfall, and storm surge spreading along much of the U.S. east coast through early next week, and interests there should monitor the progress of Isaias and updates to the forecast.

The combination of a dangerous storm surge and the tide will cause normally dry areas near the coast to be flooded by rising waters moving inland from the shoreline.  The water could reach the following heights above ground somewhere in the indicated areas if the peak surge occurs at the time of high tide…

The deepest water will occur along the immediate coast near and to the right of the center, where the surge will be accompanied by large waves. Surge-related flooding depends on the relative timing of the surge and the tidal cycle, and can vary greatly over short distances.

A dangerous storm surge will raise water levels by as much as 0.9 – 1.5 m (3 to 5 feet) above normal tide levels in areas of onshore winds in the Northwestern Bahamas.

Hurricane conditions will continue to spread over the Northwestern Bahamas later today.

Hurricane conditions are expected to reach the coast within the hurricane warning area in Florida tonight and will spread northward through Sunday. Winds are expected to first reach tropical storm strength later today, making outside preparations difficult or dangerous. Preparations to protect life and property should be rushed to completion.

Tropical storm conditions are expected within the tropical storm warning area, and are possible within the watch area, over southern Florida by this afternoon or evening. 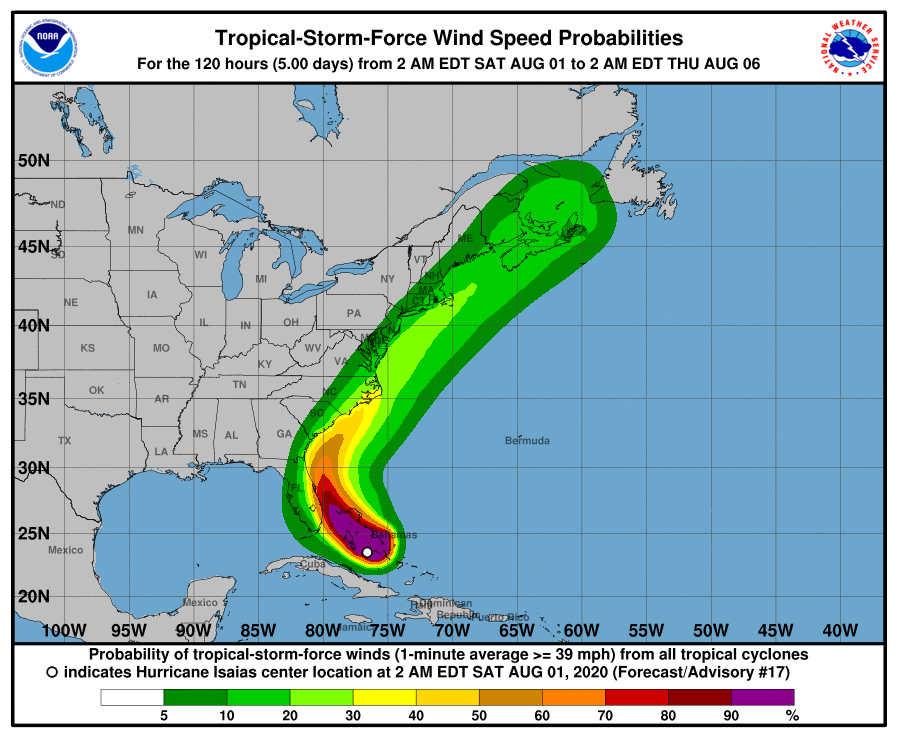 Isaias is expected to produce the following rain accumulations:

These rainfall amounts could lead to life-threatening flash and urban flooding, especially in low-lying and poorly drained areas.

From Friday night through Tuesday:

Carolinas into the mid-Atlantic, including the southern and central Appalachians: 50 – 100 mm (2 to 4 inches), with isolated maximum totals of 150 mm (6 inches).

Heavy rainfall from Isaias could result in potentially life-threatening flash and urban flooding, especially in low-lying and poorly drained areas. Minor river flooding is possible across portions of the Carolinas and into Virginia.

Swells generated by Isaias are affecting portions of Hispaniola, eastern Cuba, the Turks and Caicos, and the southeastern and central Bahamas. These swells will spread along the east coast of Florida and the southeastern United States coast today, causing life-threatening surf and rip current conditions.