A rare extreme weather event is taking place across Western Australia today into Monday, May 25, 2020. Dangerous winds could cause significant damage or destruction to homes and property. Many locations have already recorded tides exceeding their highest tides of the year. Sheep graziers are warned that cold temperatures, rain and showers, and strong westerly winds are expected during Sunday and Monday — there is a risk of losses of lambs and sheep exposed to these conditions. Extreme Fire Danger is forecast for the following fire weather districts: Gascoyne Coast and Coastal Central West – North.

Meteorologists are describing it as the worst storm to hit Western Australia in 10 years.

"We are asking the community to exercise caution," Department of Fire and Emergency Services Superintendent Danny Mosconi said.

"Stay indoors wherever possible and be mindful of any hazards like debris or fallen branches. Don’t go out on the water on Sunday or Monday. You will be risking not only your life by the lives of the marine rescue volunteers who will be called to help you."

The situation is caused by a deep low pressure system passing near the southwest of the state tonight (local time), and a tropical system (Ex-Tropical Cyclone "Mangga") expected to move over the NW Cape and weaken this evening.

Damaging winds wiill extend to remaining parts of the warning area during Sunday evening and overnight.

Locally dangerous winds, averaging 80 to 90 km/h (50 – 56 mph) with peak gusts of around 130 km/h (80 mph) are possible in coastal areas between Exmouth and Jurien Bay until Sunday evening. Dangerous winds are also possible overnight and Monday morning southwest of a line Perth to Bremer Bay. Dangerous winds could cause significant damage or destruction to homes and property.

Winds are expected to ease across the Pilbara and Gascoyne coast overnight tonight.

Many locations have recorded tides exceeding their highest tides of the year, BOM said.

"This is a rare event for Western Australia particularly due to the extent of the area affected and the possibility of multiple areas of dangerous weather." 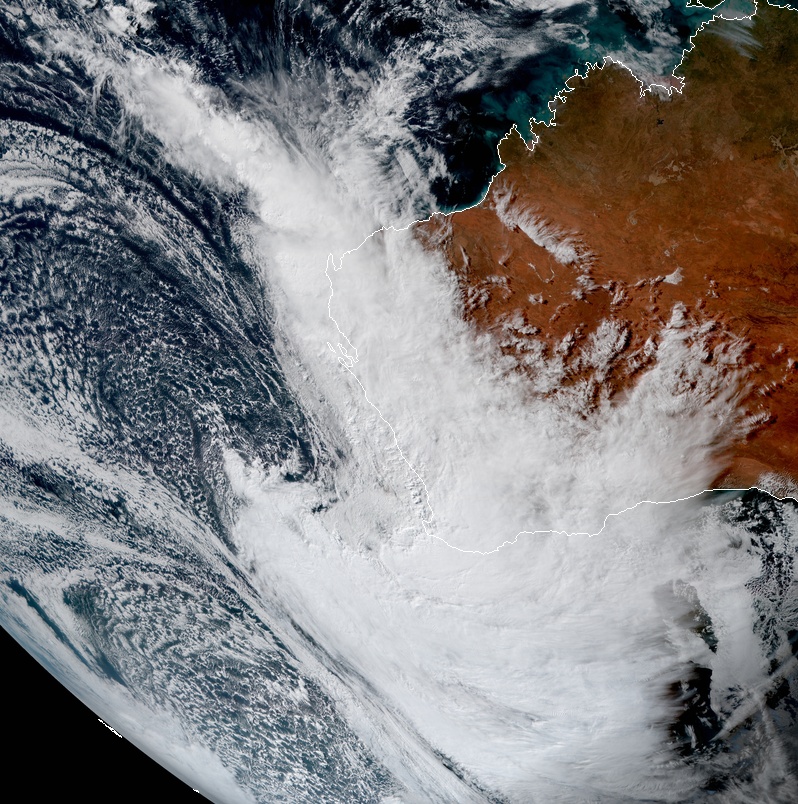 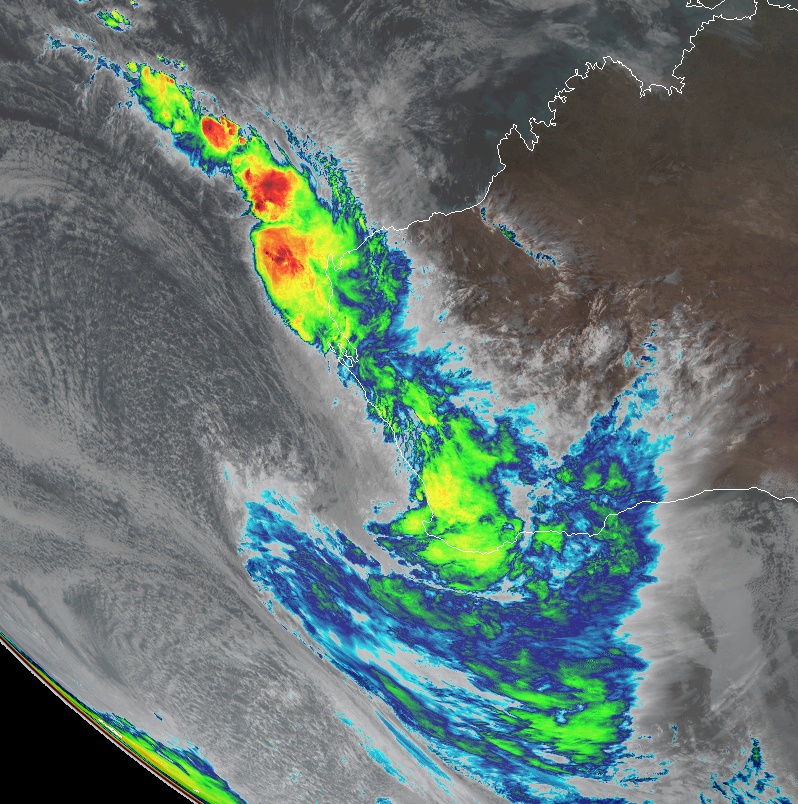 Heavy rainfall that may lead to flash flooding is possible northwest of a line from Kalbarri to Onslow during today with isolated rainfall totals to around 100 mm (4 inches).

Heavy rainfall may also occur southwest of a line from Kalbarri to Albany from this afternoon (LT) with isolated rainfall totals to around 60 mm (2.4 inches).

Residents in coastal areas between Exmouth and Augusta are specifically warned of the potential of a dangerous storm tide. Tides are likely to rise significantly above the normal high time mark with damaging waves and dangerous flooding.

Damaging surf condition are likely which could cause significant beach erosion. Damaging surf is expected to continue for coastal parts between Denham and Israelite Bay into Tuesday.

The following severe wind gusts have been recorded:

The Department of Fire and Emergency Services advises that people should:

* If outside find safe shelter away from trees, power lines, stormwater drains, and streams.
* Close your curtains and blinds, and stay inside away from windows.
* Unplug electrical appliances and do not use landline telephones if there is lightning.
* If boating, swimming or surfing leave the water.
* Be alert and watch for hazards on the road such as fallen power lines and loose debris.
* Keep away from flooded drains, rivers, streams, and waterways.
* Be careful of fallen trees, damaged buildings, and debris.
* Be careful of fallen power lines. They are dangerous and should always be treated as live.
* Assess your home, car, and property for damage.
* If damage has occurred take photos and contact your insurance company to organize permanent repairs.
* If your home or property has significant damage, like a badly damaged roof or flooding, call the SES on 132 500.

Sheep graziers are warned that cold temperatures, rain and showers and strong westerly winds are expected during Sunday and Monday. There is a risk of losses of lambs and sheep exposed to these conditions.

"Fresh to strong and gusty northeast to northerly winds expected during Sunday ahead of a complex rain band with embedded low pressure systems."