A cold dome of Arctic high pressure pushing down across the Rockies and Plains will spread east-southeastward over the Lower Mississippi Valley to the Ohio Valley and the Southeast, NWS forecaster Ziegenfelder noted at 07:51 UTC on Thursday, February 20, 2020. Cold air will reach all the way down to Florida and the Caribbean by February 23.

The cold air will support accumulating snow on Thursday evening into Friday evening, February 21 over the Southern Appalachians, eastward across much of North Carolina, Northern South Carolina and Southern Virginia where locally several inches of snow are expected.

In addition, with the cold air flowing over the Great Lakes, lake effect snow will develop on Friday — the heaviest snow will be downwind from Lakes Ontario and Erie.

"Thursday will be the most harsh day in the Ohio Valley, mid-Atlantic and New England. Highs on the coldest day this week will be some 20 to 30 °F [10 – 17 °C] below what they were on the warmest day earlier in the week in most spots," AccuWeather meteorologist Kyle Elliott reported. "In comparison to the blast of Arctic air that froze the central and eastern parts of the nation late last week, the lowest temperatures with this shot of Arctic air should be about 5 – 10 °F [3 – 6 °C] higher."

"Even though this Arctic outbreak will not be as intense as late last week, it will last a little while longer," AccuWeather Senior Meteorologist Alex Sosnowski said. 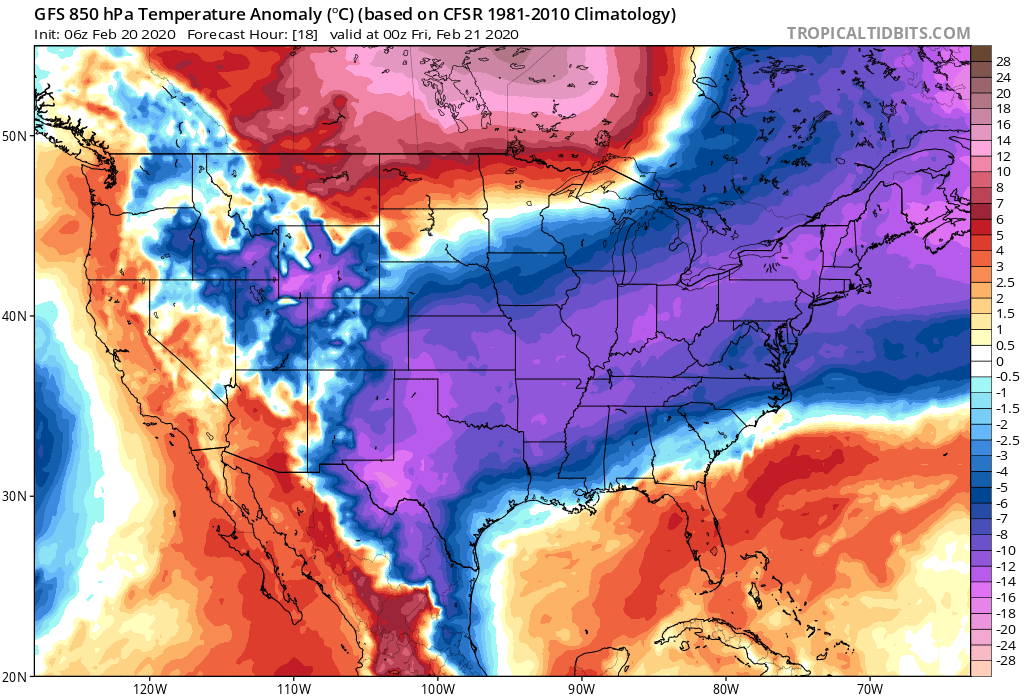 Meanwhile, up to 40 mm (1.5 inches) of rain will fall over parts of the Lower Mississippi Valley to the Southeast, mainly on Thursday, February 20.

Overrunning moisture and upper-level energy will aid in producing rain over areas hit by heavy rain during the last 14 days.

Forecast models suggest another blast of cold Arctic air will reach the United States on Tuesday, February 25 and spread all the way down to Florida by February 27. It might be even colder than the current one and last a bit longer.