Nicaraguan Masaya volcano expelled small amounts of ash toward the municipality of Ticuantepe on October 15, 2019. Early morning winds blew away most of the accumulated ashes.

Winds continue to blow from southeast to northwest, so an investigation and monitoring of civil defense authorities is urgently needed, La Jornada reports.

"If the volcano enters an eruptive activity in the current climatic conditions, the city of Managua could be affected by gases or falling pyroclastic material."

Another small eruption took place at Masaya’s Santiago Crater at 16:55 LT on July 21, 2019, producing a gas-and-ash plume that drifted NW and W. A thin layer of ash was deposited near the volcano and in surrounding communities downwind, including San Ignacio, Panamá, and Arenal, INETER reported.

During field visits on July 21 an 22, INETER volcanologists confirmed that the emissions had originated from a vent on the crater floor. 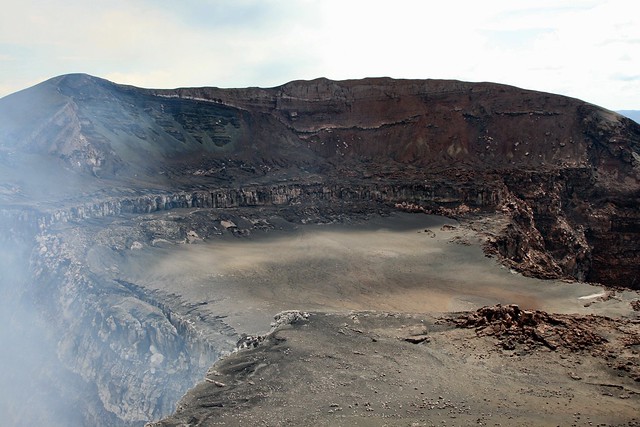 Masaya is one of Nicaragua's most unusual and most active volcanoes. It lies within the massive Pleistocene Las Sierras pyroclastic shield volcano and is a broad, 6 x 11 km (3.7 x 6.8 miles) basaltic caldera with steep-sided walls up to 300 m (984 feet) high.

The caldera is filled on its NW end by more than a dozen vents that erupted along a circular, 4-km-diameter fracture system. The twin volcanoes of Nindirí and Masaya, the source of historical eruptions, were constructed at the southern end of the fracture system and contain multiple summit craters, including the currently active Santiago crater. A major basaltic plinian tephra erupted from Masaya about 6500 years ago.

Historical lava flows cover much of the caldera floor and have confined a lake to the far eastern end of the caldera. A lava flow from the 1670 eruption overtopped the north caldera rim. Masaya has been frequently active since the time of the Spanish Conquistadors, when an active lava lake prompted attempts to extract the volcano's molten "gold." Periods of long-term vigorous gas emission at roughly quarter-century intervals cause health hazards and crop damage.