A powerful storm swept through the southern United States on April 18, 2019, leaving more than 100 000 customers without power and killing at least 3 people.

Although damage surveys are still in progress, NWS said they believe multiple tornadoes hit southwest and central Mississippi. Storm damage was reported in 24 of the state's 82 counties.

One man was killed south of Philadelphia, Mississippi after a car he was in was hit by a tree. Another person was killed in a fatal crash near the rural town of Gillsburg in southwest Mississippi. The third casualty is a woman killed after powerful winds knocked a tree onto her mobile home in St Clair County, Alabama.

A rare phenomenon occurred on Wednesday, April 17 as twin tornadoes – two tornadoes appearing near each other at the same time – touched down 6.4 km (4 miles) WNW of Shattuck, Oklahoma, AccuWeather reports. 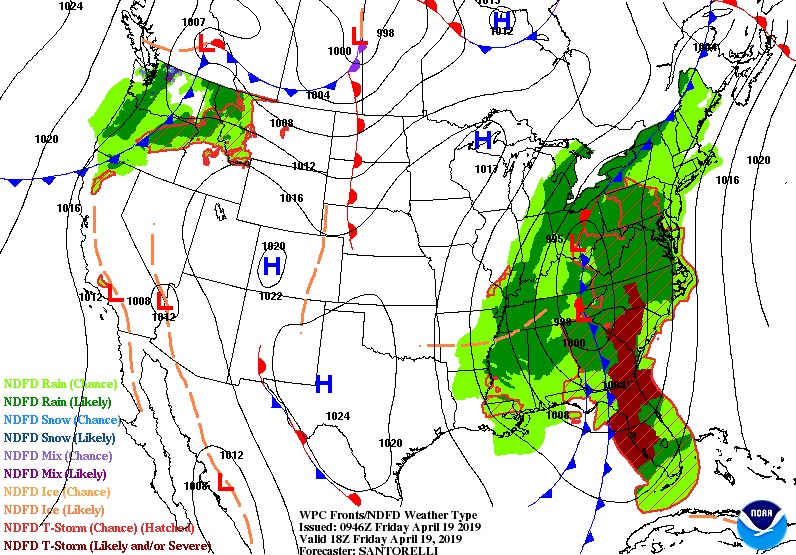 An anomalous upper level system lifting from the lower Mississippi Valley into the Ohio Valley/Mid-Atlantic this weekend will drive a cold front through the Eastern U.S., NWS forecaster Santorelli said April 19.

Widespread showers and storms are expected along and ahead of the front bringing the potential for heavy rainfall and strong to severe thunderstorms.

The greatest threat for severe weather (mainly damaging winds and isolated tornadoes) will be across parts of the Carolinas and Southern Mid-Atlantic where the Storm Prediction Center has a moderate risk posted for Friday.

A slight to enhanced risk exists across the rest of the Mid-Atlantic and the Southeast. Meanwhile, WPC highlights parts of the Mid-Atlantic (Friday) and the Northeast (on Saturday) within a slight risk for excessive rainfall, and flash flood watches are in effect across these regions as well.

While the cold front should clear the East Coast by the weekend, heavy rainfall may continue through Saturday across New England along the attendant warm front.

Ahead of the approaching cold front on Friday, temperatures will be near to above average, with widespread record high minimum (overnight) temperatures expected this morning for much of the Eastern states, and again Saturday morning across the Northeast.

Behind the front, daytime highs across the Tennessee and Ohio Valleys could be 10 to 20 °F (5 – 12 °C) below average into the weekend.