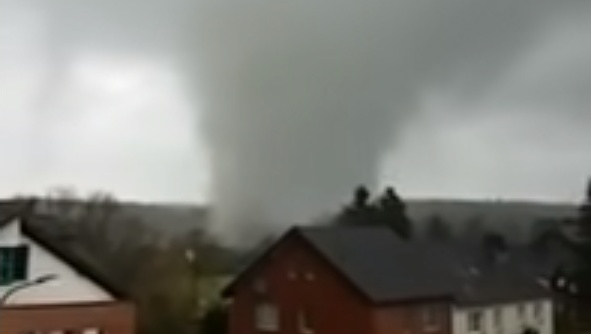 A destructive tornado hit the town of Roetgen, North Rhine-Westphalia, Germany on March 13, 2019. Around 35 homes and 2 warehouses were damaged and 5 people injured.

Roetgen Mayor Jorma Klauss said the wind blew the top floors from two of the houses in the town of 8 600 people near the Belgian border. Window panes were broken on many buildings and about 10 houses had to be evacuated.

"Ten houses are no longer habitable," said a spokesman for the fire brigade management of the Aachen region. "Five people have been slightly injured. Four of them have been hospitalized," he said Thursday morning.

The city remained calm and collected and there was no panic, Klauss said, praising the solidarity of the town's residents.

The German Weather Service confirmed the tornado, adding that such destructive events while rare, can happen even in central Germany.