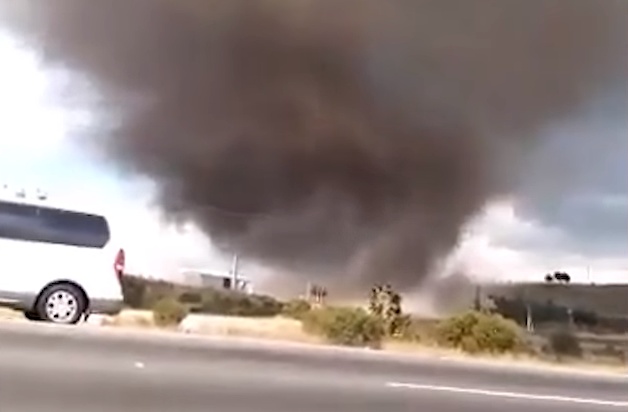 A large gustnado formed in Solola, Guatemala on February 13, 2019. Due to its large size and brownish color, the phenomenon was mistaken for tornado and quickly spread through social networks and media.

According to Tiempo, the whirlpool quickly gained strength and caused damage to two buildings but there were no reports of injuries.

Although some described the phenomenon as a tornado, the Guatemalan National Institute of Seismology, Volcanology, Meteorology and Hydrology confirmed it was, in fact, a gustnado.

A gustnado is a short-lived, shallow surface-based vortex which forms within the downburst emanating from a thunderstorm. The name is a portmanteau of "gust front tornado", as gustnadoes form due to non-tornadic straight-line wind features in the downdraft (outflow), specifically within the gust front of strong thunderstorms.

This phenomenon has little in common with tornadoes structurally or dynamically in regard to vertical development, intensity, longevity, or formative process, as classic tornadoes are associated with mesocyclones within the inflow (updraft) of the storm, not the outflow.

The average gustnado lasts a few seconds to a few minutes, although there can be several generations and simultaneous swarms. Most have the winds of an EF-0 or EF-1 tornado (up to 177 km/h / 110 mph).

They are not considered true tornadoes (unless they connect the surface to the ambient cloud base) by most meteorologists and are not included in tornado statistics in most areas. Sometimes referred to as spin-up tornadoes, that term more correctly describes the rare tornadic gustnado that connects the surface to the ambient clouded base, or more commonly to the relatively brief but true tornadoes that are associated with a mesovortex.

While injuries or deaths are rare from gustnadoes, strong ones can cause damage and they are hazardous to drivers. There is some speculation that a gustnado might have been responsible for the collapse of a stage at the Indiana State Fair on August 13, 2011 which killed 7 people and injured 58.