Severe Tropical Cyclone "Owen" is currently a Category 3 strength system in the Gulf of Carpentaria, Australia. Owen is forecast to continue on a generally easterly track for the remainder of today, intensifying to Category 4 strength before making landfall on Saturday, December 15, 2018.

Bureau of Meteorology Weather Services Manager, Dr. Richard Wardle, said Cyclone "Owen" had slowed down and remained virtually stationary on the Northern Territory coast for several hours yesterday, December 13, before turning back to the east under the influence of a mid-level trough and upper low over southeastern Australia.

Due to this slow-down, Owen is now likely to cross the Queensland coast on the western Cape York Peninsula later than initially anticipated, most likely early Saturday morning before moving in a southeasterly direction, rapidly weakening over land. 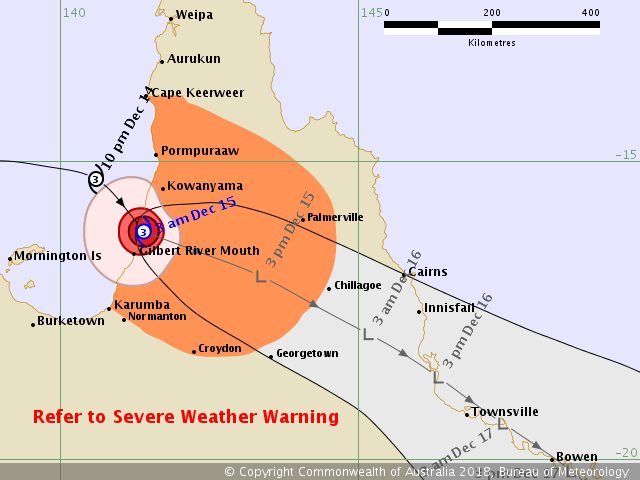 "While the system will weaken to a low over land, damaging to destructive winds will continue for several hundred kilometers inland as will areas of very heavy rainfall near the low," he said.

A Flood Watch remains in place for a very broad area extending from the Gulf of Carpentaria and southern Cape York Peninsula to coastal catchments from Cape Tribulation to Rainbow Beach.

Some of these catchments have already seen significant recent rainfall when the low crossed the far north Queensland coast from the Coral Sea.

"Forecast models generally bring the system down Queensland's east coast, but not as far as southeast Queensland. Impacts may include very heavy rainfall with the potential for flash flooding with damaging to destructive winds possible," Wardle said.

There is also a moderate chance that Owen will re-develop into a tropical cyclone in the Coral Sea on Sunday or Monday, December 17 if it moves over water.

"This dynamic weather situation is compounded by severe thunderstorms for large areas of eastern Queensland, with the potential for heavy rainfall due to the very moist tropical airmass in place and the upper low over New South Wales."