This earthquake can have a medium humanitarian impact based on the magnitude and the affected population and their vulnerability. It hit just a few days after shallow M6.4 on July 28 in which 17 people died.

This is just 14 km (8 miles) south of Rinjani stratovolcano.

A brief tsunami warning was in effect after the quake.

Strong aftershocks are shaking the region. 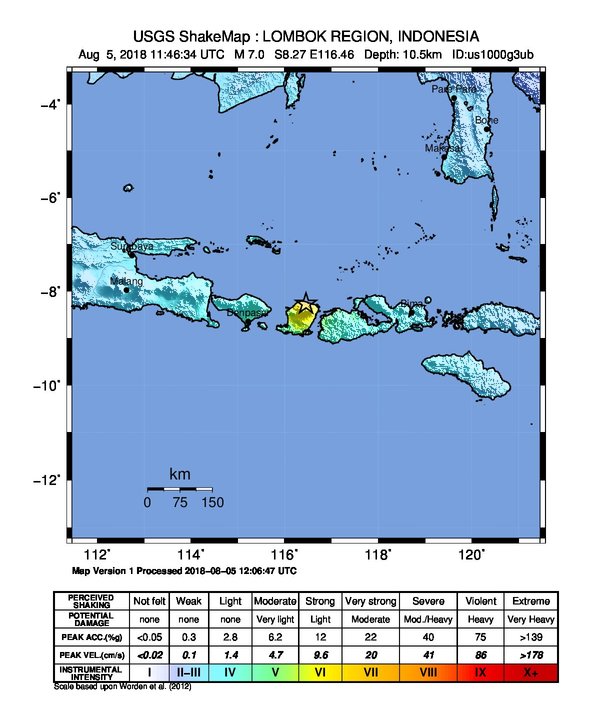 Estimated economic losses are less than 1% of GDP of Indonesia.

Overall, the population in this region resides in structures that are vulnerable to earthquake shaking, though resistant structures exist. The predominant vulnerable building types are unreinforced brick with concrete floor and concrete/cinder block masonry construction.

Recent earthquakes in this area have caused secondary hazards such as tsunamis that might have contributed to losses. 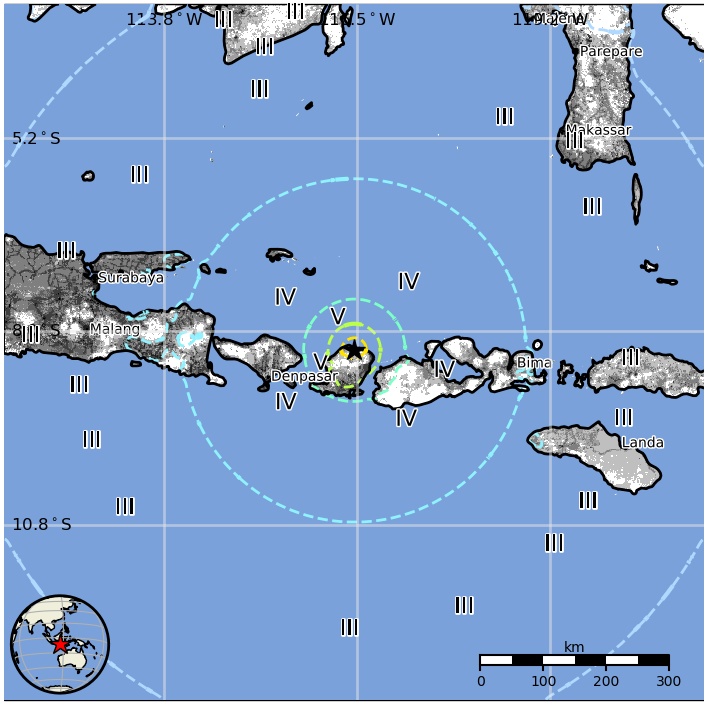 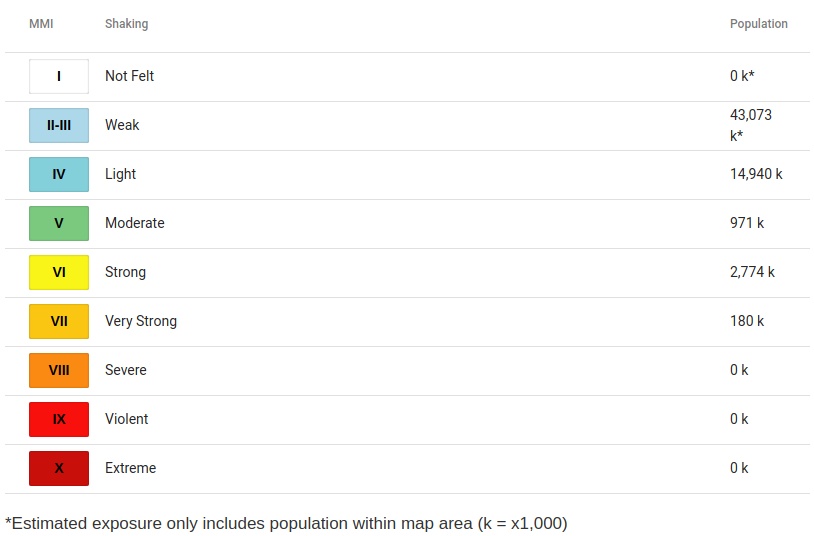 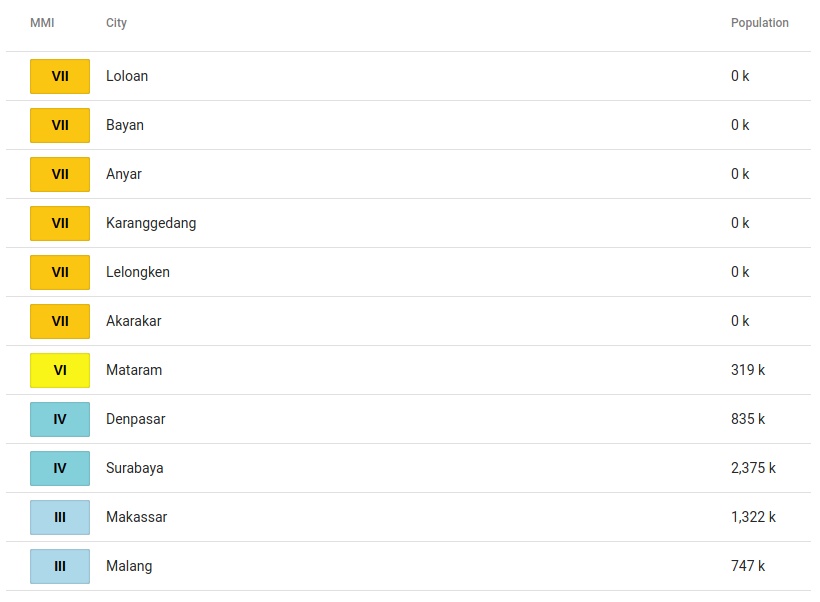 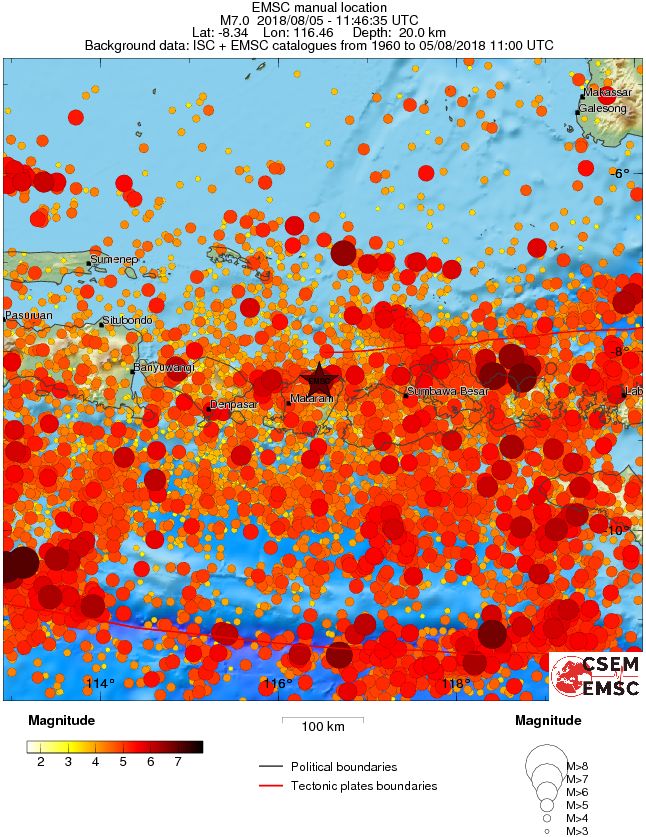 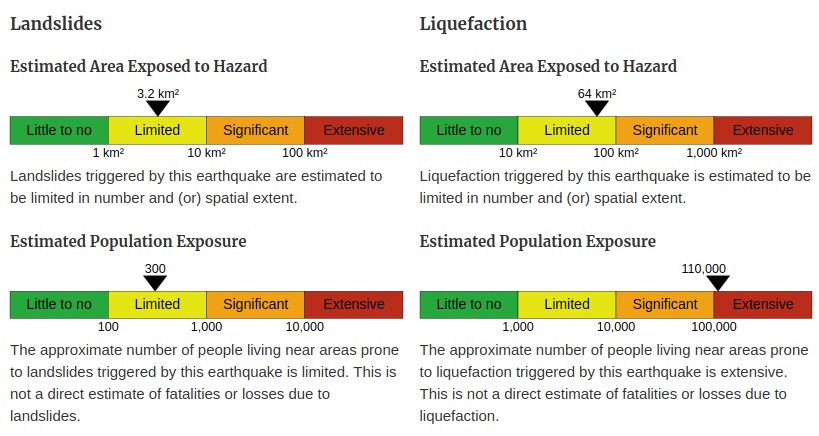 The quake occurred as the result of shallow thrust fault on or near The Flores Back Arc Thrust. Preliminary focal mechanisms for the earthquake indicates slip occurred on either a shallow, south-dipping thrust fault, or on a steep, north dipping reverse fault. At the latitude of this earthquake, the Sunda and Australia plates converge in a north-south direction at a rate of about 70 mm/yr. The location of this earthquake is consistent with it occurring as southward-oriented thrust faulting on the Flores Back Arc Thrust.

At the location of this event, the Sunda plate underthrusts the Indonesian Arc to the south, along the Flores Back Arc Thrust local to this earthquake, and along the Wetar Back Arc Thrust farther to the east. To the south, the Australia plate also underthrusts the arc to the north, along the Java Trench. This Flores region marks the transition between traditional oceanic plate subduction in the west (Australia plate beneath Sunda) to continental collision in the east. As a result, two opposite-verging thrust systems are evident in cross-sections, and the northward subducting slab of the Australia plate exists at depth beneath the Indonesian Islands and the Flores Sea. The focal mechanism solution and depth of this earthquake indicate it is associated with the Flores Back Arc Thrust system, rather than the deeper Australia slab.

In the region surrounding the August 5, 2018 earthquake, there have been six other events of M6.5 or larger over the previous century. Four of these are likely to have occurred on the back arc thrust system; a M6.5 in the Bali region to the west of Lombok in July 1976, and three events of M6.5, M6.5, and M6.6 in the Sumbawa region to the east of Lombok in November 2007 and November 2009. The Sumbawa earthquakes were associated with several deaths, hundreds of injuries, and hundreds of houses being destroyed.

An initial tsunami warning of waves of up to 50 cm (1.6 feet) was issued following the quake but later withdrawn.

This quake hit just a few days after strong and shallow M6.4 on July 28 which killed at least 17 people, injured more than 150 and destroyed thousands of homes.

Aftershocks were numerous and as large as M5.7.

The earthquakes caused remobilization of ash deposits on Rinjani as well as landslides. There were 1 226 visitors to the Mount Rinjani National Park Area at the time, and, according to news articles, about 690 climbers were on the volcano and had to be rescued. One person in the national park died from rockfalls.

Witnesses said the initial quake grew in intensity over several seconds, rattling windows and doors, and there were many aftershocks.

The death toll rose to 82. Most of the victims were killed by falling rubble in northern and western parts of Lombok.

Hundreds were injured and thousands of homes damaged.

The death toll rose to 91 and is still expected to rise as information come in from areas where thousands of buildings collapsed or were badly damaged, the National Disaster Mitigation Agency (BNPB) said.

Power and communications were cut in some areas of Lombok, and the military said it was sending in a vessel with medical aid, supplies and logistical support for the island.

The quake prompted an exodus of tourists.

The numbers are still expected to rise as data collection is still not completed. 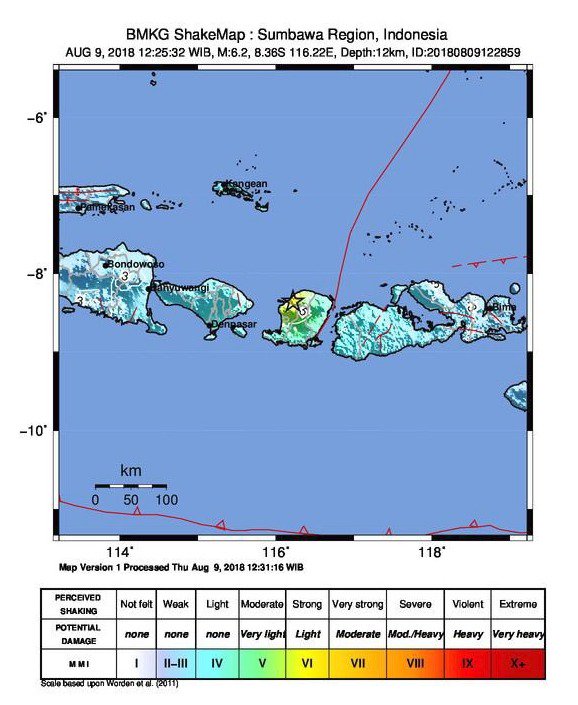 This quake had no tsunami potential, authorities said.

The BMKG registered a total of 334 aftershocks following the August 5 M7.0 Lombok earthquake by 14:00 UTC, August 8. 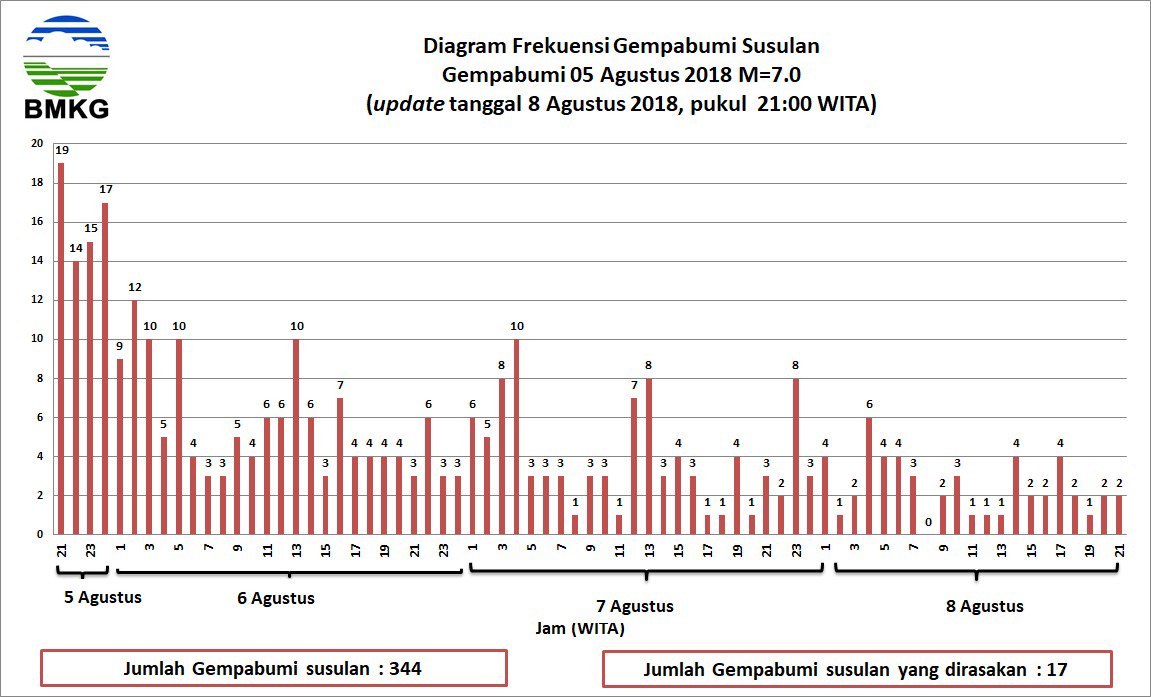 The death toll reached 259 and is still expected to rise.

The death toll jumped to 387. More than 13 000 people were injured and more than 387 000 displaced. Thousands of buildings were damaged.

Sadly, the death toll is still expected to rise because there are still victims suspected of being buried by landslides and under rubble. There are also victims that have not been recorded and reported.

Most deaths occurred in the north of Lombok, where 334 people died and more than 200,000 people were forced out of damaged homes.

The death toll has surged to 460, officials said August 16.

A total of 7 773 people sustained injuries, 71 962 houses were damaged as well as 671 educational facilities and 52 health infrastructures.