Explosive activity at Anak Krakatau in Indonesia continues and its seismicity is reportedly going off the scale today, July 12, 2018. 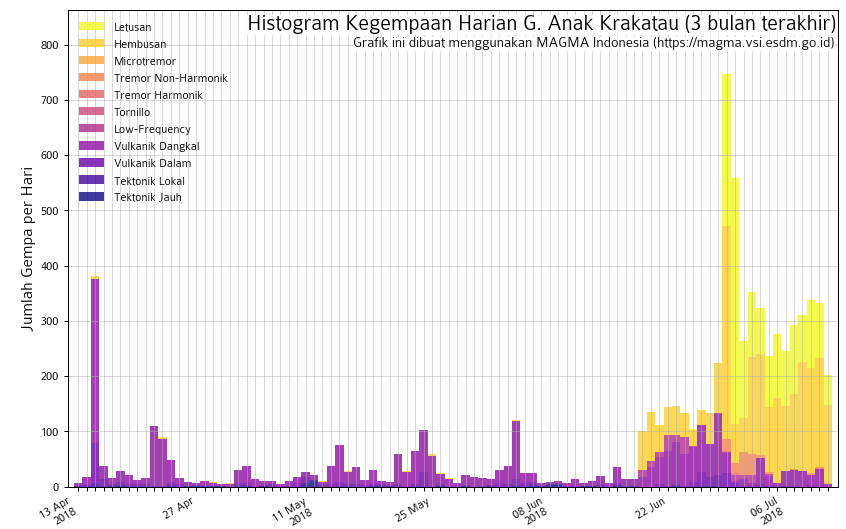 Just a few hours ago, photographer and volcano-enthusiast Øystein L. Andersen, said activity at the volcano is quite unique now. "It seems like you can now see a bright glow from the eruption from the coast of Java, 50 km (31 miles) away."

This is how #Krakatau is seen trough my camera lens at present. Out there 50km on the Sunda Strait. Continious eruption ongoing, and booming sounds can be heard. According to the volcano observatory, the current activity started 2 days ago. @id_magma pic.twitter.com/wpsY9IS0IL

Wow is that #Krakatau lightening up in the Sunda strait or am I seeing wrong? Damn, should I just drive down to the coast of Java to check it out tonight? #volcano pic.twitter.com/A2jETWJiNo

This is how #Krakatau volcano sounded like last night, timelapse included. It was a very special experience.Being able to listen to the eruption 50km away from one of the most well known #volcanoes of the world. It sounded like distant canonfire and vibrations shook windows. pic.twitter.com/6tNmhRfpnr

#Krakatau – the story so far. @planetlabs imagery shows that the current eruptive episode has created a new vent (or enlarged an existing one), which emitted a lava flow to the S on July 11-12. @id_magma @vulkanologi_mbg @Sutopo_PN

PVMBG reported there were four ash-producing events at Anak Krakatau on July 4 and 5, each lasting between 30 and 41 seconds. While inclement weather conditions prevented an estimation of the ash-plume height from the event at 05:22 local time on July 4, ash plumes from events at 14:09, 14:25, and 16:51 on July 5 rose 300 – 500 m above the crater rim and drifted N and NW.

At this time, the Alert Level remains at 2 (on a scale of 1-4). Residents and visitors were warned not to approach the volcano within 1 km (0.62 miles) of the crater.