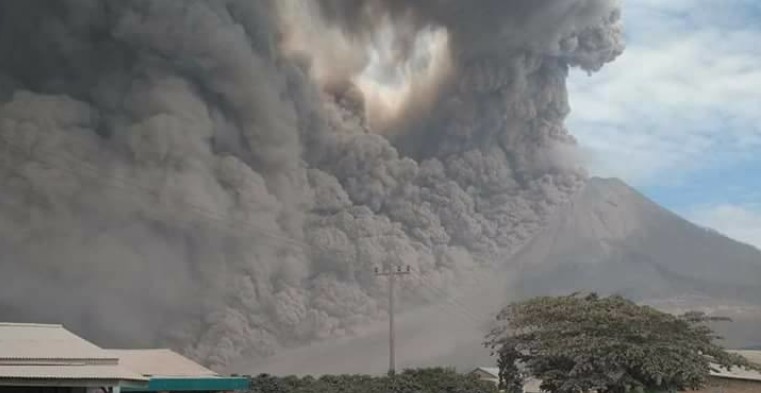 The eruptions produced a large pyroclastic flow at 03:04 UTC (08:04 local time). The flow tumbled down the east and southeast slopes as far as 4.5 km (2.8 miles), reaching the Labortus River and creating a natural dam on its upper reaches.

According to local media reports, students from an elementary school in Kuta Rakyat were sent home because volcanic ash covering the village was considered dangerous.

National Disaster Mitigation Agency spokesman Sutopo Purwo Nugroho said, as reported by the AFP, thousands of people in 10 villages were directly affected by ash fall. He warned villagers to stay out of a danger zone that extends as far as 7 km (4.4 miles) from the peak.

Nugroho said villagers urgently need face masks and clean water and called on people to be vigilant about the possibility of flash floods and lava flows because the eruption created a natural dam on the Laborus River.

Sinabung's first eruption in known history took place in August 2010. It lasted about a month and had Volcanic Explosivity Index of 2.

Seismicity fluctuated until September 2013, when dense white plumes started rising 100 to 150 m (328 to 492 feet) above the crater. Sinabung's first major eruption in known history occurred on September 17, 2013 and the volcano remains active ever since. Tens of thousands have been evacuated.

Between February 2014 and May 2016, eruptions at Mount Sinabung claimed lives of 23 people.