A line of thunderstorms moved through parts southeast Minnesota, northeast Iowa, into southwest Wisconsin during the later afternoon and evening of Wednesday, July 19, 2017 into July 20. It produced heavy rain, damaging wind gusts and at least one EF-1 confirmed tornado in McGregor, Iowa who suffered the worst storm damage in at least 50 years. Flooding and mudslides were a widespread concern as storms pushed through.

The strong wind cores hit areas between Claremont and West Concord, MN in Dodge County, from Osage to Alta Vista, IA, and in the McGregor, IA area, NWS said. Numerous wind gusts of 112 km/h (70 mph) or slightly higher were received.

Most of the damage was upper-end EF-1 in McGregor's historic downtown where it completely destroyed two buildings in the 300 block of Main Street. Much of the second floor of a brick building housing the Inkspiration tattoo studio was torn away, La Crosse Tribune reported. The bricks from the tattoo studio landed on three vehicles parked near the building, demolishing a pickup and two cars, all appearing to be total losses. 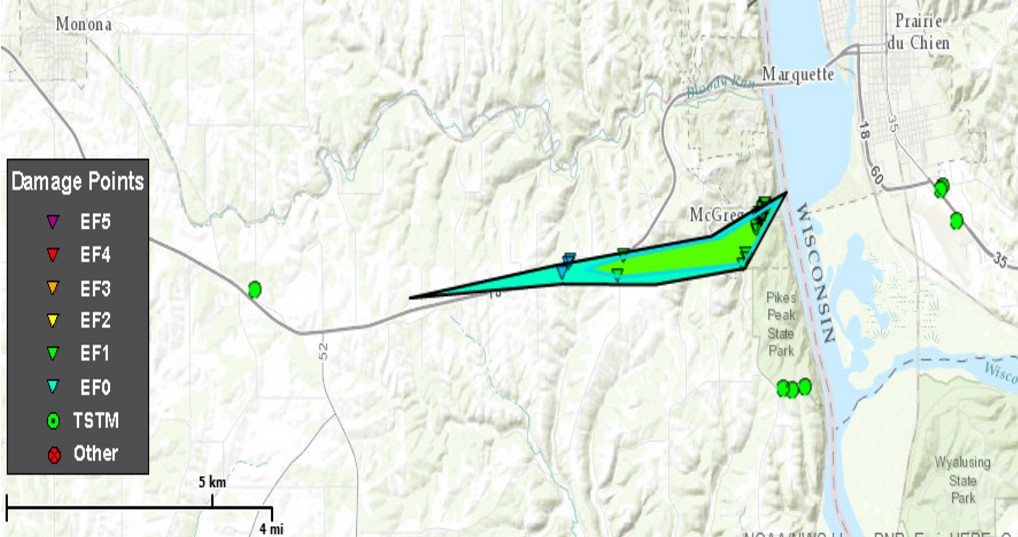 A two-story building about half a block east collapsed, with the second story façade coming down to street level, the “John Goedert” sign on top of the structure nearly within reach of passersby.

"McGregor has never seen storm damage this bad, not in the 50 years that I know of," McGregor Mayor Harold Brooks said at a press conference.

Authorities had entrances to McGregor sealed off to traffic from anyone but residents, business owners, first responders and certified companies with tree removal equipment. 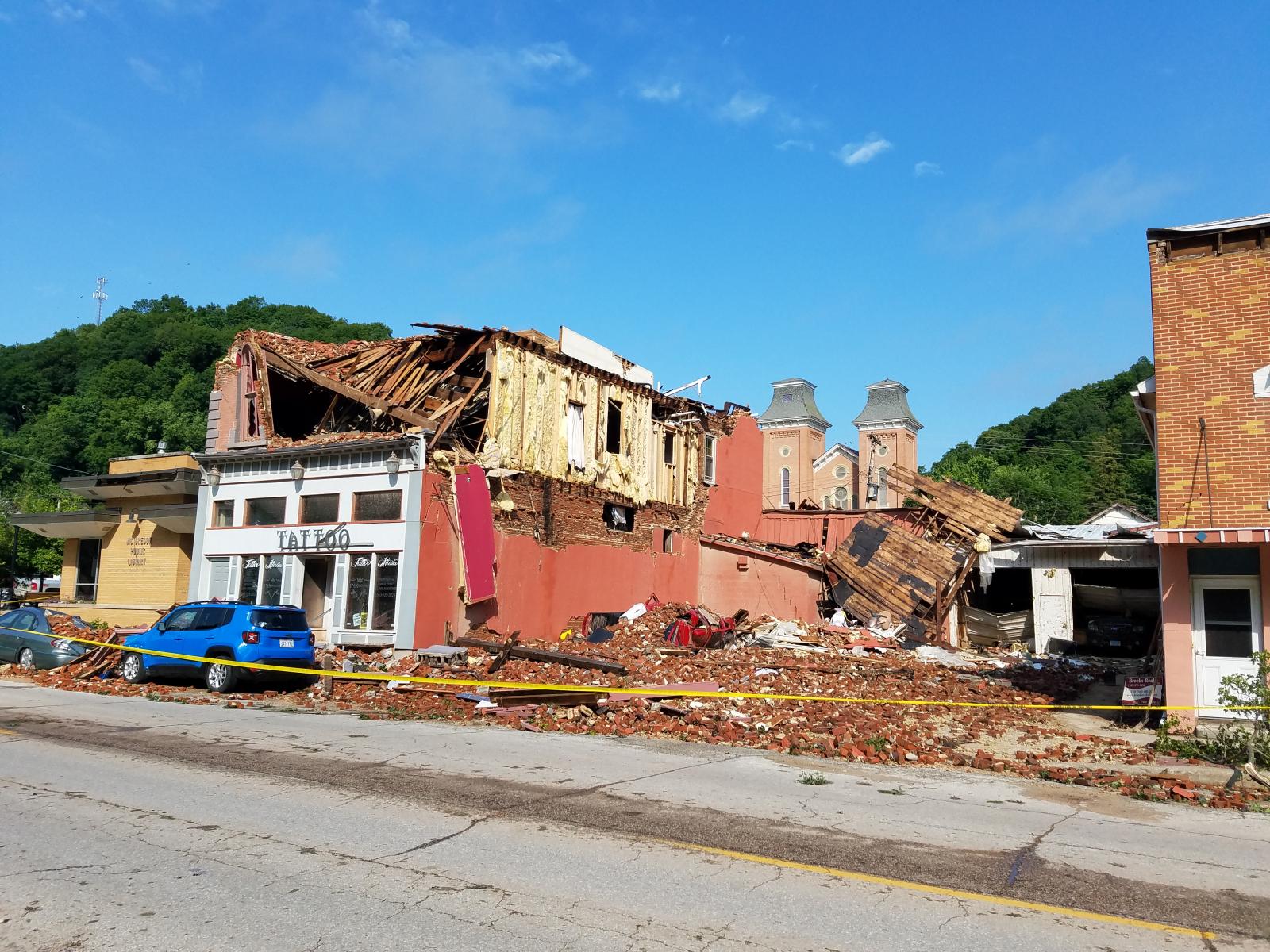 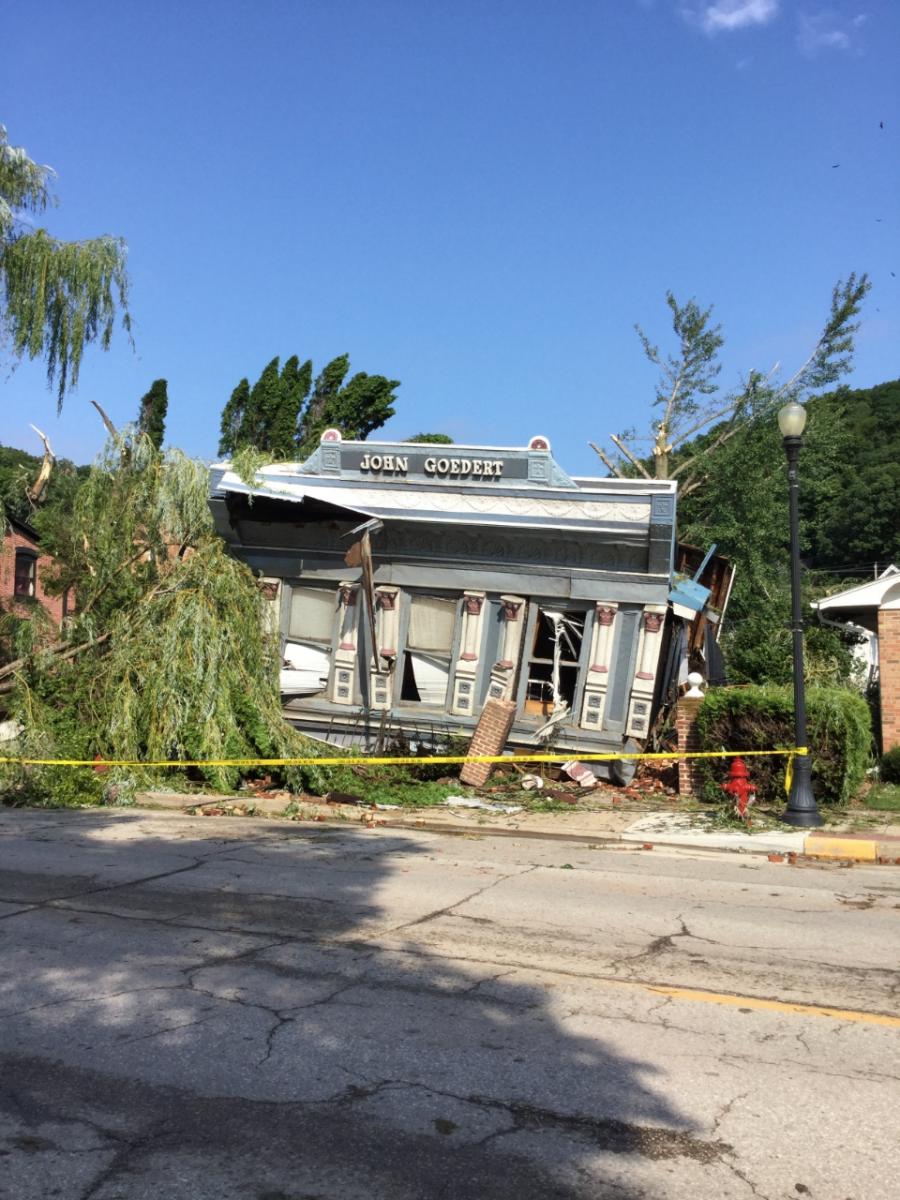 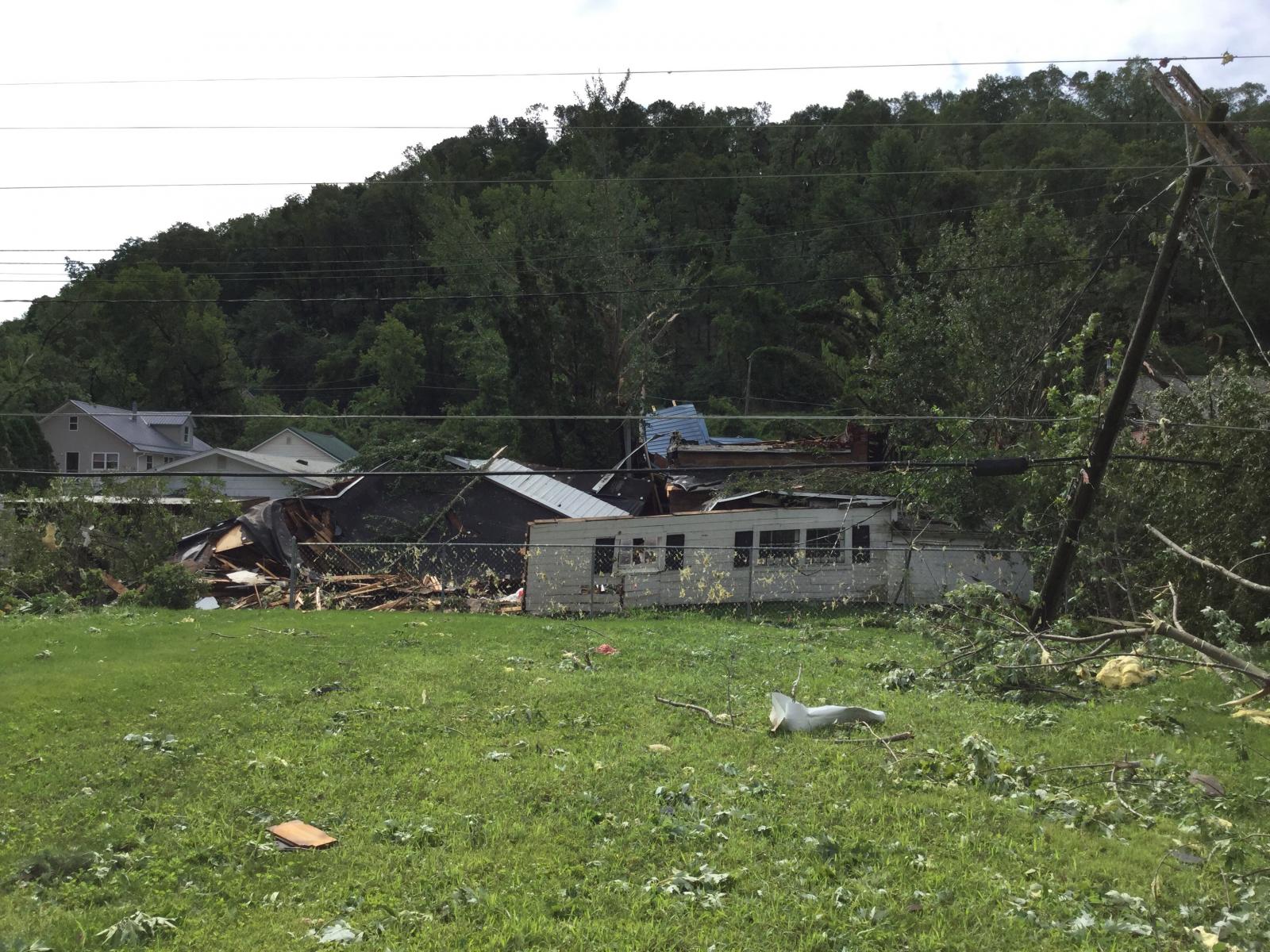 Later in the evening, storms redeveloped further north in western Wisconsin. These repeatedly hit the same areas just east of the Mississippi River into the Wisconsin River valley. Many towns were flooded out by 152 – 203 mm (6 – 8 inches) of rain and many rivers rose or will rise to major flood stage, NWS office in La Crosse reported.

On Thursday morning, July 20, hundreds of residents were evacuatd from their homes in Arcadia, Wisconsin as a swollen creek flooded the downtown area and closed several major roads.

"The Trempealeau River in Arcadia crested at its highest level since the September 2010 flood, 109 cm (3.6 feet) above flood stage early Thursday morning," said weather.com senior meteorologist Jon Erdman. "In nearby La Crosse, it's been the fourth-wettest year-to-date through June 19, over 229 mm (9 inches) above the average-to-date and just over 50.8 mm (2 inches) behind the record-setting pace of 1993, the year of the infamous Midwest flooding."

Flooding and mudslides were a widespread concern in the upper Midwest as storms pushed through Wednesday night and Thursday morning. In southeastern Minnesota, several roads were closed by floodwaters or mudslides, the AP reported.

A portion of Highway 95 in Wisconsin had to be shut down near Fountain City due to a mudslide.