At least 7 people have been killed and several others severely injured after multiple tornadoes hit parts of central and southern Iowa on Saturday afternoon into Sunday, March 5 into 6, 2022.

The tornadoes caused widespread damage, with areas of Madison County around Winterset the worst affected. Winterset is located near Des Moines.

According to the National Weather Service (NWS), the Winterset tornado could be as strong as EF-3, with wind speeds of at least 218 km/h (136 mph). At least 6 people, including 2 children under the age of 5 were killed and 4 others seriously injured. One had life-threatening injuries and was flown to the hospital.

"Initial interrogation of photos and videos from around Winterset suggests at least EF-3 tornado damage occurred late Saturday afternoon," NWS Des Moines said. "Survey teams will be out Sunday to thoroughly investigate the damage and further assess a potential rating."

Madison County Emergency Management said this is the worst that anyone has seen in quite a long time. "It will be impactful for many years to come."

Up to 30 homes were severely damaged in the county.

Iowa Gov. Kim Reynold issued a disaster proclamation for the area Saturday evening to free up state resources in the cleanup efforts.

"Our hearts go out to all those affected by the deadly storms that tore through our state today," said Gov. Reynolds.

"Kevin and I join with Iowans in prayer for those that lost their lives and those injured. Our hearts ache during this time, but I know Iowans will step up and come together to help in this time of need—they already are."

Another person was killed in the town of Chariton, Lucas County, located southeast of Winterset.

"Downed powerlines, standing water and debris blocking roadways are creating dangerous travel conditions in this area and we are asking for the public's assistance by staying clear of the area and allowing these agencies to work unimpeded," the sheriff's office cautioned.

Large and damaging hail was also reported in the region.

More than 10 000 homes were left without power.

Severe thunderstorms are expected late today through tonight in a corridor from the ArkLaTex region and Ozarks into the Ohio Valley and Tennessee Valley, NWS Storm Prediction Center warns.

This includes the risk for a few tornadoes and damaging winds, especially this evening/early overnight across parts of northern Arkansas and southern Missouri.

SPC received 33 tornado reports on March 5, all of them from Iowa, and 28 large hail reports. 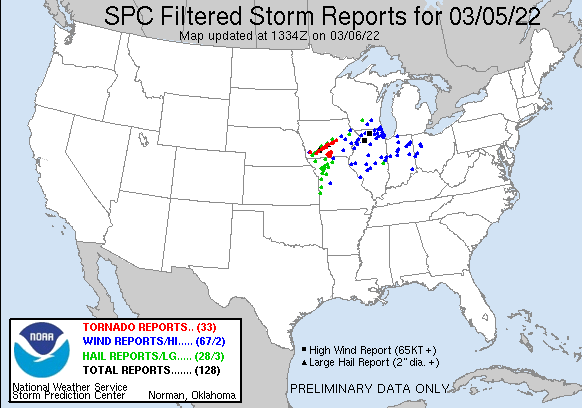