A strong and shallow earthquake registered by the USGS as M5.8 hit NW Montana at 06:30 UTC (00:30 MDT) on July 6, 2017. The agency is reporting a depth of 4.3 km (2.7 miles). EMSC is reporting M5.8 at a depth of 5 km (3.1 miles). Montana is one of the most seismically active states in the United States. Since 1925, the state has experienced five shocks that reached intensity VIII or greater (Modified Mercalli Scale). During the same interval, hundreds of less severe tremors were felt within the state. The strongest earthquake to hit the state since 1900 was M7.5 on August 18, 1959.  It caused 29 fatalities and about $11 million in damage to highways and timber.

Reports received by the EMSC mention shaking lasting for about 6 or 7 seconds and an immediate aftershock that lasted about 3 seconds. Many people said the quake was strong enough to wake them up. One witness from Helena said they felt steady shaking for 30 – 45 seconds, 'it was enough for us to move to doorways and then out of the house.' 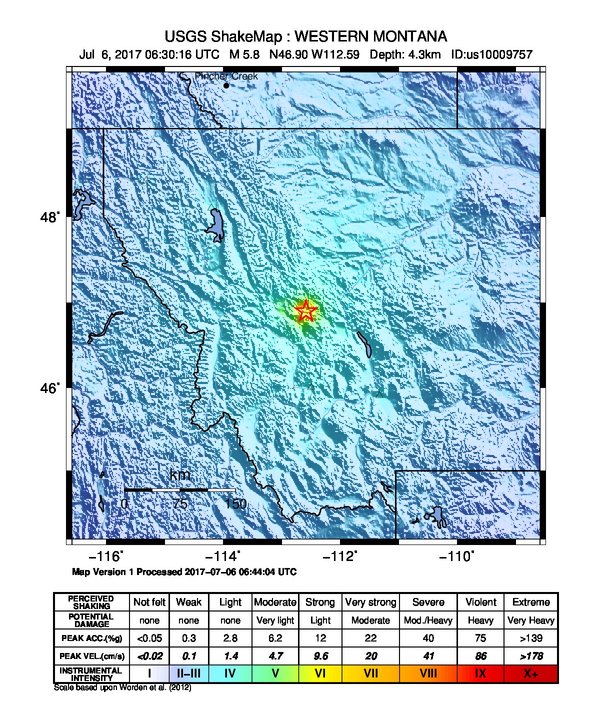 Overall, the population in this region resides in structures that are resistant to earthquake shaking, though vulnerable structures exist. The predominant vulnerable building types are ductile reinforced concrete frame and reinforced masonry construction. 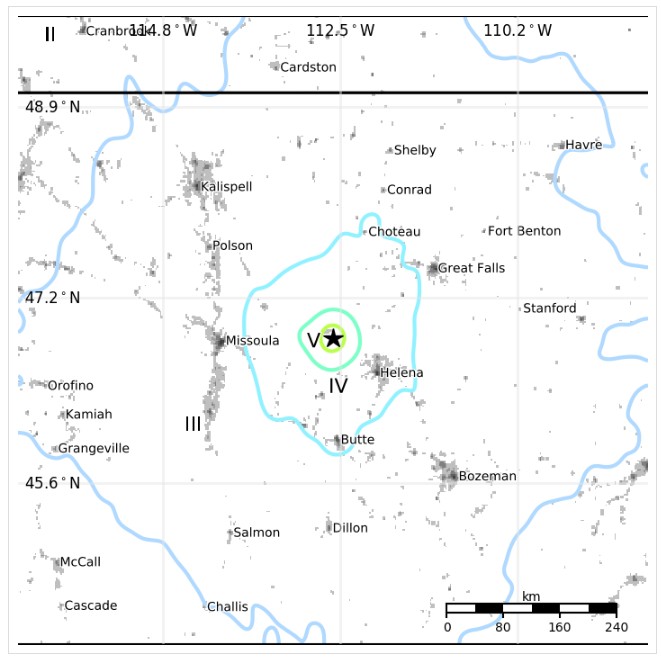 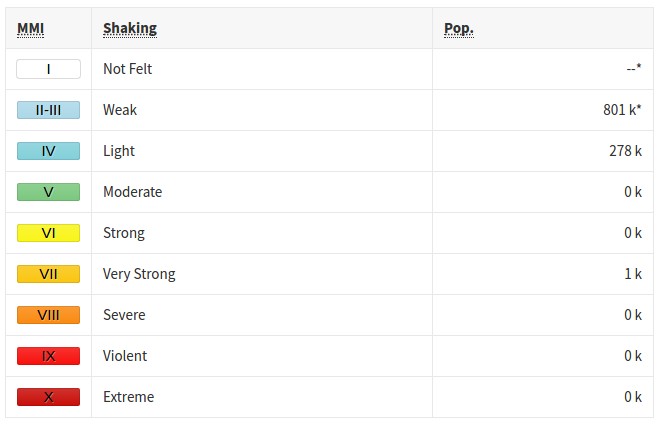 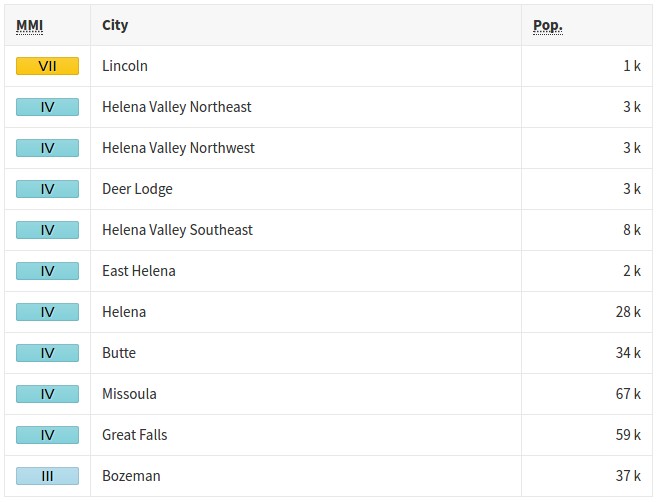 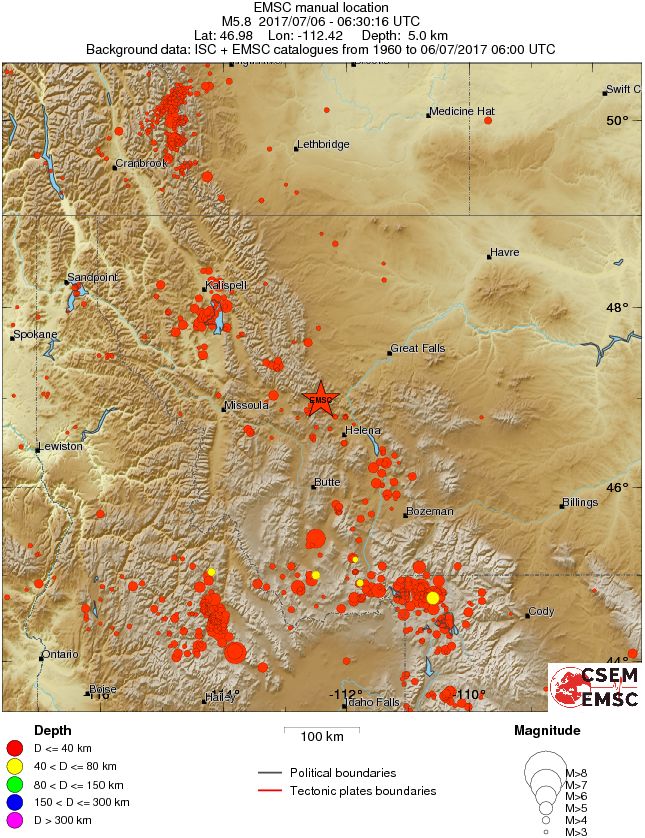 Montana is one of the most seismically active states in the United States. Since 1925, the state has experienced five shocks that reached intensity VIII or greater (Modified Mercalli Scale). During the same interval, hundreds of less severe tremors were felt within the state. Montana's (Source: MBMG, 2010) earthquake activity is concentrated mostly in the mountainous western third of the state, which lies within the Intermountain Seismic Belt (image below). 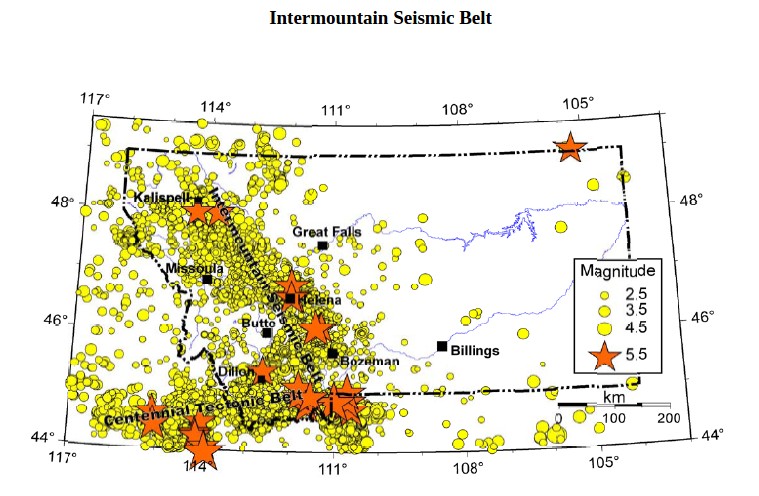 The table below shows the historic earthquakes of Montana and surrounding regions with magnitude of 5.5 or greater since 1900. Although one significant earthquake occurred in eastern Montana in 1909, the majority have occurred along the Intermountain Seismic Belt and Centennial Tectonic Belt in western Montana. 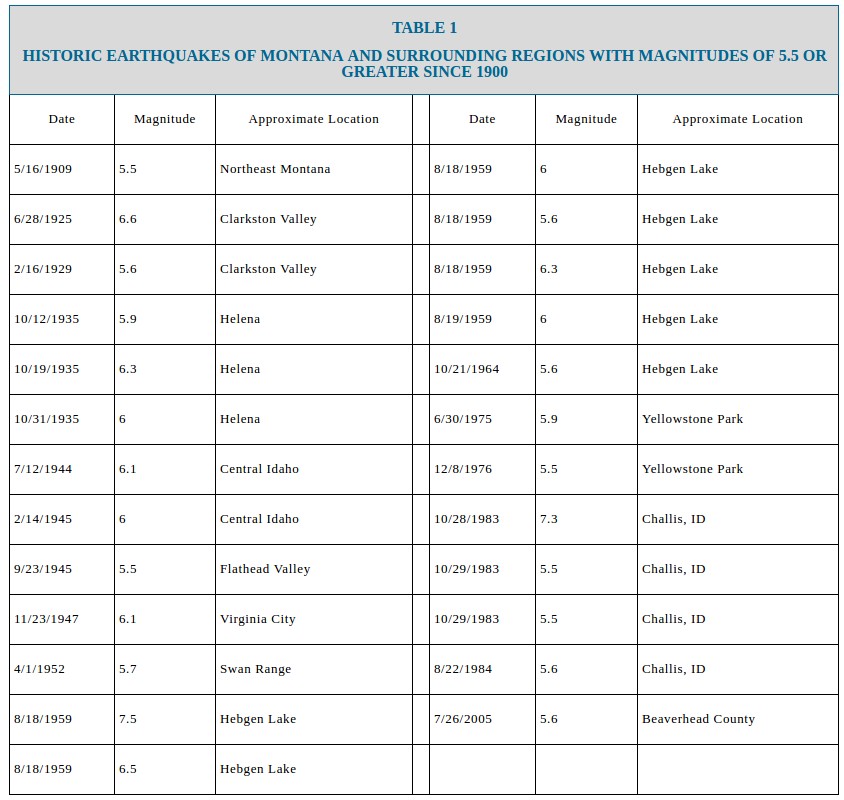 Hebgen Lake Earthquake – The Hebgen Lake magnitude 7.5 earthquake, which occurred on August 18, 1959, was the largest earthquake in Montana and the 14th largest earthquake in the contiguous U.S. in historic times (Stover and Coffman, 1993). This earthquake caused 29 fatalities and about $11 million in damage to highways and timber. It was characterized by extensive fault scarps, subsidence and uplift, a massive landslide, and a seiche (large wave) in Hebgen Lake. A maximum intensity X or greater (Modified Mercalli Scale) was assigned to the epicentral area.

Helena Earthquakes – Starting with a small tremor on October 3, the City of Helena, Montana suffered through a devastating series of several hundred earthquake shocks in the month of October 1935, including three damaging earthquakes with magnitudes of 5.8, 6.3, and 6.0 on October 12th, 18th, and the 31st. Although no surface ruptures occurred during this earthquake sequence, shaking from the earthquakes damaged more than half of Helena’s buildings. The epicenters of the 1935 earthquake series are not precisely known, but were probably located about 6 km (3.7 miles) to 20 km (14 miles) north of the city, possibly along the Prickly Pear fault zone (Qamar and Stickney, 1983) and the Helena Valley fault (Doser, 1989). The following description of the earthquake is from the National Information Service for Earthquake Engineering (NISEE, 1998).

Dillon Earthquake – On the evening of July 25, 2005 at 10:08 p.m. a magnitude 5.6 earthquake occurred in southwestern Montana 16 kilometers north of Dillon. The Intensity VI shaking at Dillon caused damage to some masonry structures, particularly older chimneys. A large chimney on Old Main Hall on The University of Montana-Western campus in Dillon sustained severe damage and was subsequently removed to prevent total collapse. Beaverhead County DES personnel estimated that that up to 60 percent of the older masonry chimneys in Dillon were damaged. An overpass above Interstate-15 located 6.5 km southwest of the epicenter experienced sheared anchor bolts and spalled concrete but remained in good service. Ground cracks formed in weakly consolidated deposits approximately 3 km southwest of the epicenter, apparently a result of strong ground shaking in weak soils but were unrelated to primary faulting. The Dillon earthquake occurred on a previously unknown fault that apparently lacks surface expression (Stickney, 2007). [Montana DPHHS]