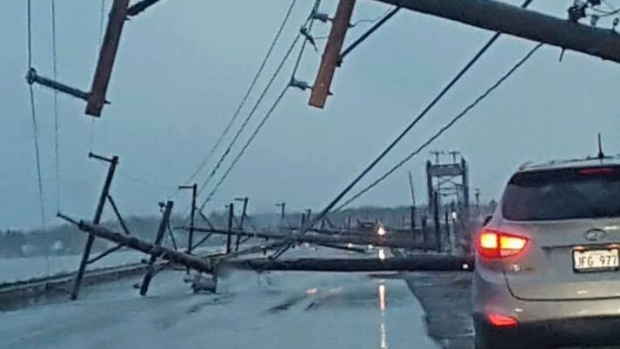 According to CBC, heavy winds split power poles in half and tore large roofing tiles of a store in downtown Caraquet, the worst hit area. Lamèque and Shippagan were also hit hard by the storm.

Robert Duguay, a spokesperson with New Brunswick Emergency Measures Organization (NBEMO), said a bridge between the town of Shippagan to Lamèque Island has been closed after several electric poles fell onto the bridge. He said the Canadian Coast Guard also had to rescue a boat that was stranded in the water during the storm. Officials say the repair work will be complex, as both transmission and distribution lines have been damaged.

"The storm was a replica of the January ice storm that hit the area earlier this year, but the impact is limited to a very small area and the storm was brief," Duguay said.

"The situation is now stable," he said. "It was a very quick, major storm that hit very hard on the Acadian Peninsula." There were no reports of injuries or casualties.

Earlier in the day, severe thunderstorms crossed Ontario, damaging homes, downing trees and showering some regions with moderately sized hail. At one point, more than 50 000 Hydro One customers were without power.

Emergency Measures Organization reminds residents without power to use generators with caution. "Never run generators or cook with an open flame inside a home or the garage, as these activities create carbon monoxide, which can become extremely dangerous. Testing batteries in carbon monoxide detectors and smoke detectors is recommended."