A lightning-caused West Mims Fire is still burning, more than a month after it started on April 6, 2017, approximately 2.5 miles (4 km) northeast of the Eddy Fire Tower in the Okefenokee National Wildlife Refuge in Georgia. As of May 10, the fire has consumed 140 409 acres (56 826 hectares) and is only 12% contained. This is currently the largest uncontained fire in the United States.

In May 9th Evening Summary, officials said that the fire was not as aggressive as was anticipated for the first time in 3 days. The fire experienced low, sporadic winds with light winds expected to continue through the night.

The situation changed today and the fire was very active again, mostly centered on areas south of Highway 94. The inversion helped reduce intensities somewhat, but a visible column with active burning developed by early-afternoon. Other areas of the fire experienced smoldering, creeping and active flame from re-burn. 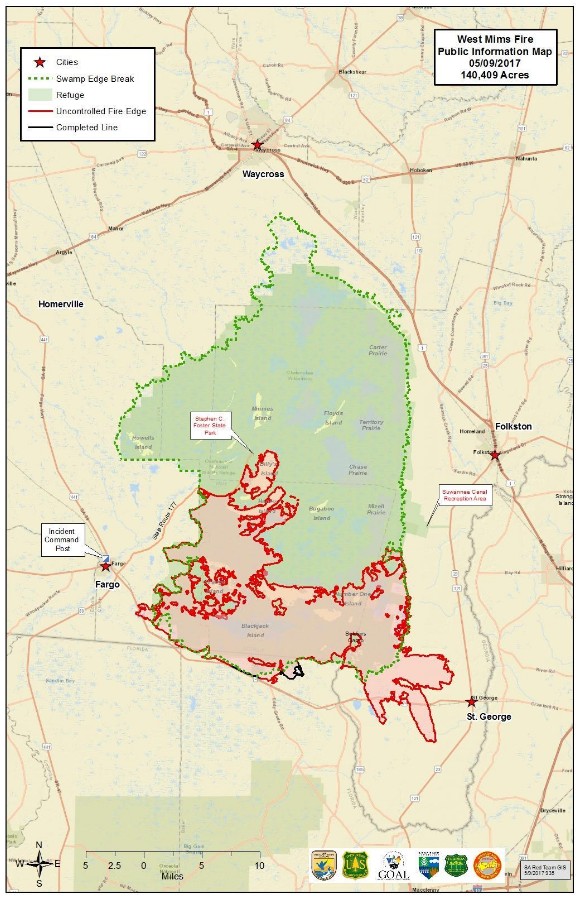 Over the next 12 hours, the fire is expected to continue its extreme activity. Beyond that, extremely dry fuels will produce high risk of erratic fire behavior including long range spotting and crown runs. There is also a high risk that fire could escape control lines. Threats remain for the greater community of St. George, private timberlands outside of the Swamp Edge Break, Chesser Island Boardwalk, Stephen C. Foster State Park, John Bethea State Forest and Florida Hwy 2/Georgia Hwy 94.

According to InciWeb, severe drought conditions are expected to continue for the near future, continuing to affect vegetation ahead of the fire. The vegetation is so dense that it is only accessible to firefighters on the ground with bulldozers. Contingency lines are in place around the southernmost part of the fire from St. George to Moniac areas south. Contingency lines are roads and newly constructed lines to complete a solid defensible line around portions of the fire that present the greatest threat of aggressive activity. They are often located some distance from the main fire front and are reinforced by clearing brush and ground fuels, and in some cases trees where necessary, to create safer areas for firefighters to attack and stop the fire. Removing fuels from the contingency line toward the fire front is critical to the successful containment and final control of the fire.

The fire officials are anticipating a containment date of November 1, 2017.

Mandatory evacuations expanded on Tuesday to encompass the entire southern half of Charlton County, Georgia. This includes the communities of St. George and Moniac. Residents in Western Nassau County, Florida, have also been told to prepare for evacuations if the fire continues to spread.