Increased volcanic activity at Costa Rica's Poas volcano on Sunday, April 9, 2017, forced authorities to evacuate a large group of tourists. The last eruptive activity of this volcano was reported in July 2016.

According to the park rangers, the evacuation took place at 13:00 local time as a preventive security measure due to the strong emission of gasses. Some of them suffered eye and throat irritation caused by volcanic gasses.

Since January 2017, the OVSICORI-UNA volcanic monitoring group has been observing a substantial increase in seismic activity, the rate of emission of gasses, as well as significant deformation of the volcano.

In March and early April, seismic network registered more than 200 earthquakes (LP) per day. In addition, ground deformation (inflation) of more than 1 cm (0.39 inches) was observed over the past 3 months.

A new degassing vent was observed at the shore of the lake on April 7. The observatory noted major concentrations of sulfur dioxide and hydrogen chloride, among other gasses. The temperature of released water was about 90 °C (194 °F). 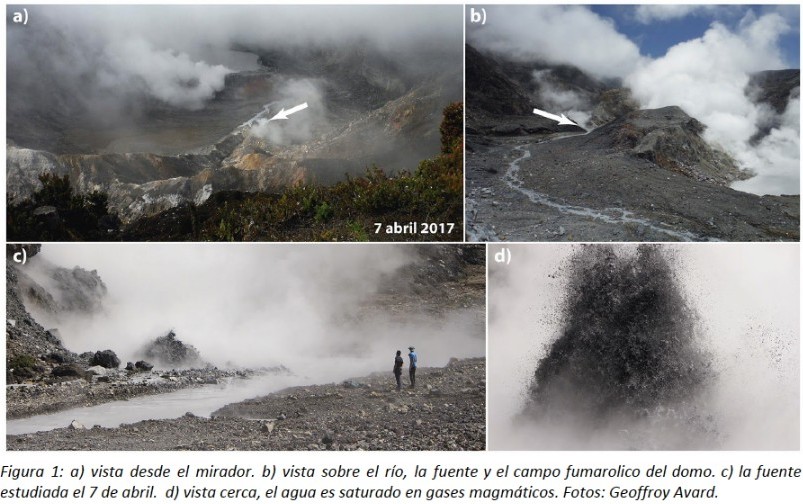 The broad, well-vegetated edifice of Poás, one of the most active volcanoes of Costa Rica, contains three craters along a N-S line. The frequently visited multi-hued summit crater lakes of the basaltic-to-dacitic volcano, which is one of Costa Rica's most prominent natural landmarks, are easily accessible by vehicle from the nearby capital city of San José. A N-S-trending fissure cutting the 2708-m-high complex stratovolcano extends to the lower northern flank, where it has produced the Congo stratovolcano and several lake-filled maars. The southernmost of the two summit crater lakes, Botos, is cold and clear and last erupted about 7500 years ago.

The more prominent geothermally heated northern lake, Laguna Caliente, is one of the world's most acidic natural lakes, with a pH of near zero. It has been the site of frequent phreatic and phreatomagmatic eruptions since the first historical eruption was reported in 1828. Eruptions often include geyser-like ejections of crater-lake water. (GVP)