A new research instrument located on the Mauna Loa volcano in Hawaii – K-Coronagraph –  showed the technique it uses to observe Sun's corona can be used to provide earlier warnings to astronauts when dangerous high-energy particles are blasted out of the Sun's corona. Although K-Cor, as ground-based instrument, has its drawbacks, NCAR team who built it proved that agencies could deploy a single space-based coronagraph and use the technology to provide early warnings. The additional time could help protect astronauts, satellites.

The K-Coronagraph or K-Cor, owned and operated by the National Center for Atmospheric Research (NCAR), could flag dangerous high-energy particles blasted out of the Sun's corona nearly 20 minutes faster than coronagraphs based in space, according to a new, NASA-led study. Coronagraphs use a disk to block the blinding light of the Sun's face in order to create an artificial solar eclipse, enabling scientists to study the very dim solar atmosphere known as the corona.

Ground-based instrumentation costs a fraction of space-based hardware, and images can be acquired more frequently (seconds compared to minutes) and then distributed in near real time. K-Cor is also the only coronagraph that is observing the low corona in white light. This allows it to detect the very early stages of the solar activity that drives space weather.

There are several types of space weather events originating on the Sun that can produce impacts on Earth. The new paper, published in the journal Space Weather, examines solar energetic particles (SEPs), which are accelerated into space by fast-moving explosive events known as coronal mass ejections (CMEs). The fastest SEPs can reach Earth in less than a half hour after leaving the Sun.

Unlike the CMEs themselves, SEPs do not cause the geomagnetic storms that can disrupt power grids and GPS systems on Earth. But they can harm astronauts and spacecraft, and they can block high latitude communications and increase radiation over the Earth’s poles, forcing airlines to reroute flights from shorter polar paths to longer lower latitude routes.

The potential of SEPs to cause damage is associated with their energy and the amount of particles produced. CMEs that are fast and produce a particular type of radio emission tend to generate more dangerous SEPs. Therefore the ability to measure the early speed of a CME — and, later, to determine if there was an accompanying radio burst — can allow scientists to provide a warning that damaging space weather is on the way.

A coronagraph can be used to measure the speed and acceleration of a CME, but only if it can capture multiple images closely spaced in time. Even then, those images would have to be provided quickly to space weather forecasters on Earth to be part of a useful warning system.

Existing space-based coronagraphs, like those onboard the SOlar and Heliospheric Observatory (SOHO) and the Solar TErrestrial RElations Observatory (STEREO), take too few images and send those images back to Earth too infrequently to be used for this type of an operational warning system.

But K-Cor, which has been operating at NCAR's Mauna Loa Solar Observatory (MLSO) since 2013, can deliver on both counts. The coronagraph can take a new image every 15 seconds, and those images are processed and available on the internet less than 15 minutes later. With the installation of a new, faster computer at MLSO — a project that is currently underway — the lag until the images are widely available could shrink to just a few minutes.

Scientists at NASA Goddard Space Flight Center also are working to develop software that could automatically identify the formation of a CME in the data and flag it, a necessary step toward actually using K-Cor in an operational capacity. 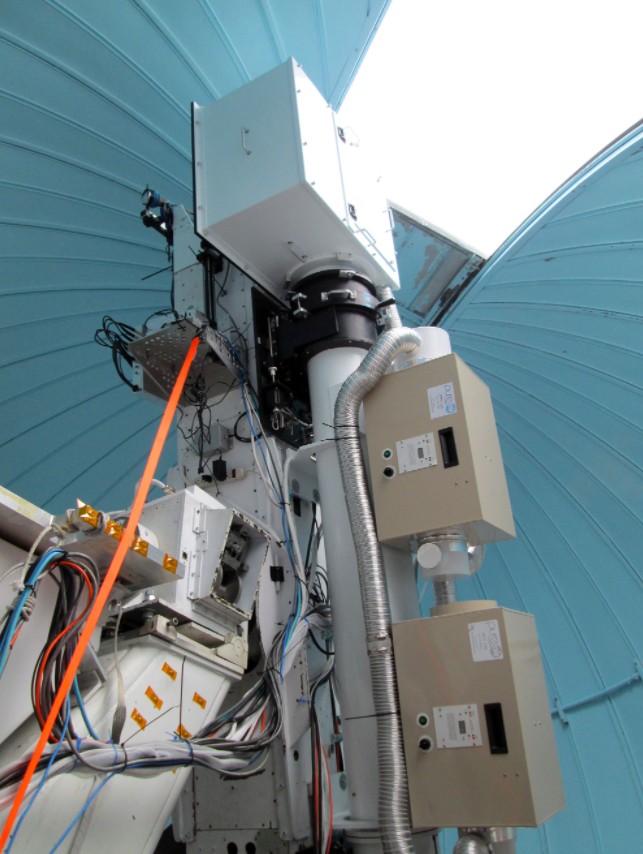 In the new study, the researchers used an SEP event that occurred on January 1, 2016, as a test case to see if K-Cor could be used to provide early warnings for these kinds of events. They found that K-Cor could have provided a warning 19 minutes earlier than any other instrument. But K-Cor has drawbacks, too.

"You can only see the Sun so many hours in a day from one ground-based site," Burkepile said. "On a good day, we get 10 hours of data, but you're at the mercy of the weather and the sky conditions." 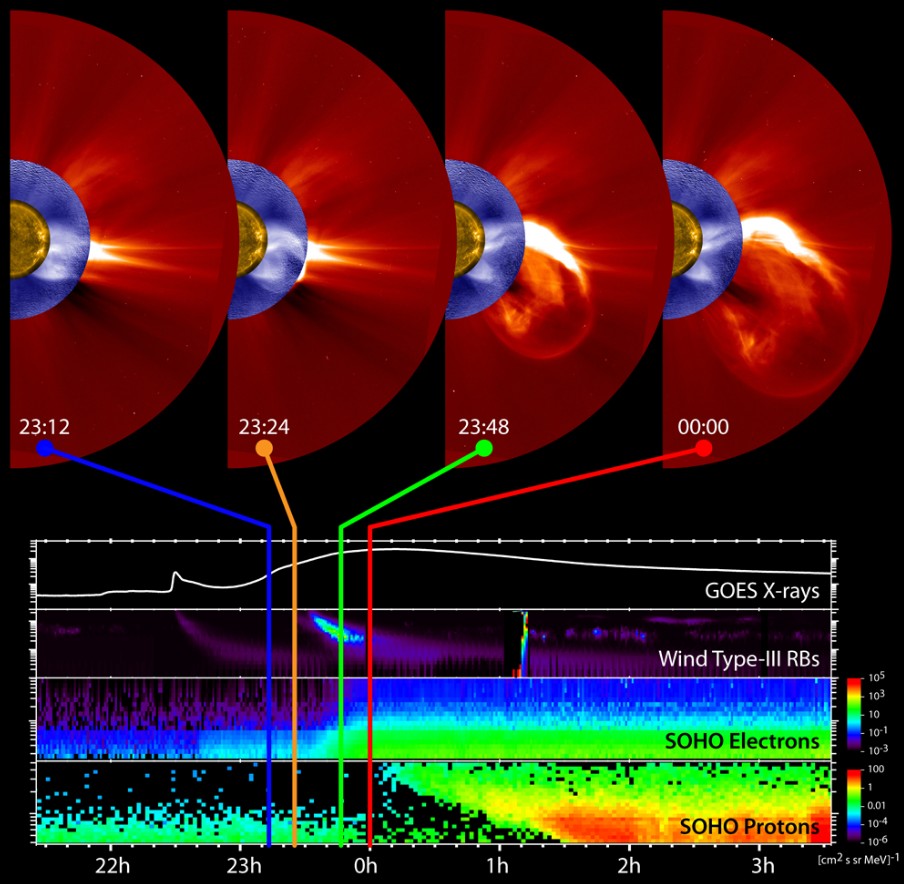 In the top row, an eruption from the Sun on January 1, 2016, is captured in a composite by the Solar Dynamics Observatory (in gold), the K-Coronagraph (in blue), and the Solar Helophysics Observatory (red). Image courtesy of Joan Burkepile, NCAR.

To address this, NASA or other agencies would need to deploy a half-dozen ground-based coronagraphs spaced longitudinally around the globe. Alternatively, agencies could deploy a single space-based coronagraph — if it could be engineered, like K-Cor, with the ability to measure white light, take frequent pictures, and communicate quickly with Earth.

Either way, scientists would also need to prevent warnings that are false positives. While K-Cor can see the formation of a CME quite early, it takes many more minutes before other instruments can detect whether or not there will be an accompanying radio burst, which increases the likelihood that a damaging SEP event will occur.

"The first sign of a fast-moving CME event is really much more like a storm watch issued here on Earth," Burkepile said. "We have to wait until we have evidence of a radio burst to upgrade the watch to a storm warning."