Two weeks of continuous heavy rainfall has caused severe flooding in the Dominican Republic, damaging more than 4 000 houses and displacing more than 20 000 people. So far, five deaths, including two children, have been reported. Forecasters warn a new tropical cyclone has a high chance of developing over the next 5 days in the Caribbean Sea, increasing the threat of further flooding.

An Emergency Declaration was released on November 11 for the northern provinces of Puerto Plata, La Vega, Espaillat and María Trinidad Sánchez, the worst hit provinces.

As of November 15, 17 provinces are on alert, six of which on red alert, according to the European Commission's Directorate-General for European Civil Protection and Humanitarian Aid Operations (ECHO).

The Ministry of Education has suspended classes in these provinces.

20 135 displaced people are being hosted by their communities and 294 people are officially housed in three shelters.

4 089 houses are damaged, 50 have been totally destroyed and a total of 131 communities are isolated.

Officials predict that the destruction will cost millions of dollars. Some of the hardest hit provinces are also the country’s biggest rice producers.

The rains have also caused landslides that have damaged and destroyed homes and blocked access to many bridges and roads.

ECHO added that the country had 25 consecutive days of meteorological alerts since Hurricane "Matthew" passed near in October. 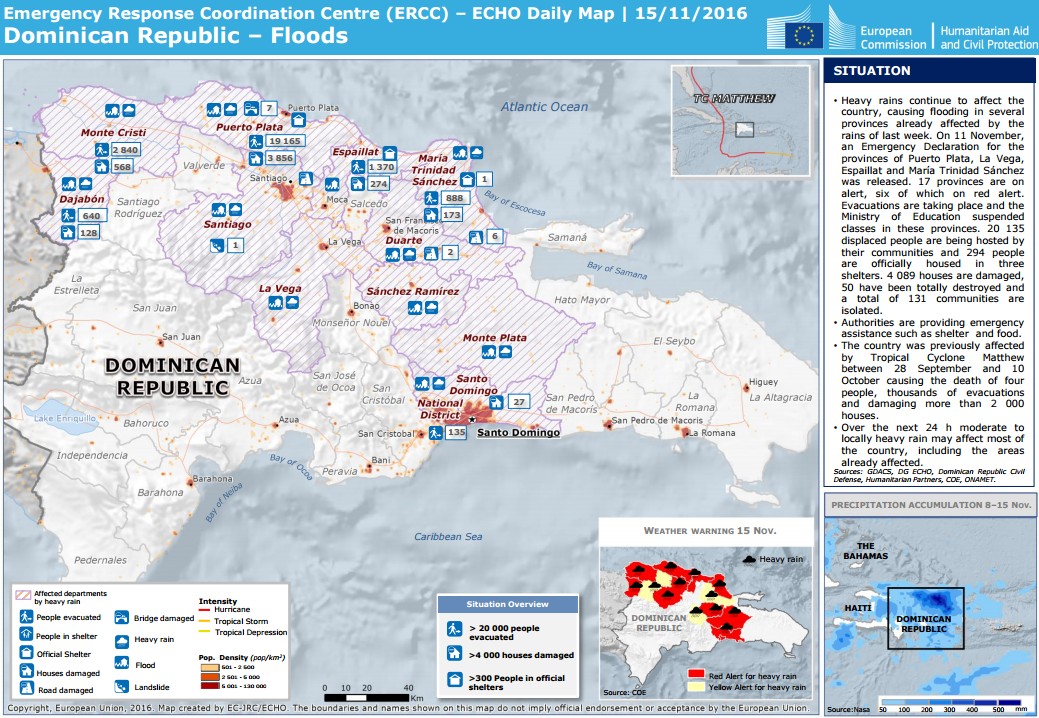 According to Espejo Republico, at least five people, including two children, have died as a consequence of flooding in the provinces of María Trinidad Sánchez, Santiago and Espaillat.

“No one should cross rivers by car, on foot, and much less swim across them," Juan Manuel Méndez, coordinator of the Dominican Emergency Operations Center, warned.

The director of Oficina Nacional de Meteorología (ONAMET) said for Diario Libre that Luperón, Puerto Plata, had recorded 639 mm (25.15 inches) of rain in 10 days to November 14 while Gaspar Hernández and Altamira, recorded 438 mm (17.24 inches) and 364 mm (14.33 inches) respectively, during the same period.

The heavy downpours have been caused by two troughs over the Caribbean Sea that have hit the country consecutively over the last several weeks. This round of severe weather is still not over as more rains are expected over the weekend.

Meanwhile, a new tropical storm of the 2016 Atlantic hurricane season has a high chance to develop over the next 5 days. If it does, it will be named Otto.

Interests in the western and central Caribbean from Jamaica to eastern Cuba, Haiti, the Dominican Republic and Puerto Rico are advised to monitor the development of the system. 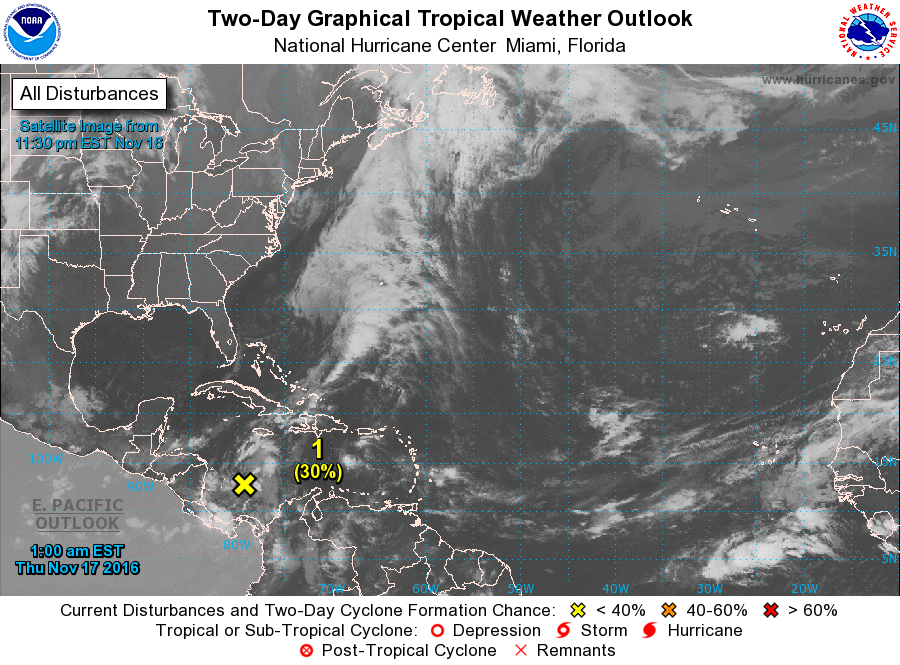 Environmental conditions are expected to be conducive for slow development during the next several days, and a tropical depression is likely to form over the weekend while the low moves slowly and erratically, NHC said.