The tail-end of the storm which battered southeast Australia this week with heavy rain and unprecedented winds, leaving the entire state of South Australia without power, will cross over New Zealand on Sunday, October 2, 2016. Severe weather warnings have been issued for the upper North Island, a region already suffering a very wet week. Rivers and streams could rise further, with possible surface flooding and slips, MetService warned. This system is bringing a major change in weather patterns the country has experienced during September. Spring is about to arrive with a bang, and a wetter than usual October is predicted for most of New Zealand.

A severe weather watch is in effect until 07:55 UTC (20:55 NZDT) on Sunday, October 2, 2016, for Northland, Auckland, Waikato, Waitomo, Coromandel Peninsula, and Bay of Plenty as the storm front moves eastwards. This is the same region that already received plenty of rain this week.

"As the front moves eastwards to lie in the eastern Bay of Plenty in the evening there continues a moderate risk of thunderstorms with this front from eastern Auckland to the central North Island hill country in the afternoon, then shifting eastwards to Coromandel Peninsula and Bay of Plenty in the afternoon and evening," New Zealand's MetService said.

Additionally for the area from eastern Auckland to the central North Island hill country, there is also the risk of strong winds gusting 100 km/h (62.1 mph), the chance of a coastal tornado, and a low risk of severe thunderstorms and localised downpours of 25 to 40 mm/h (0.98 – 1.57 inches per hour).

During Sunday, 20 to 40 mm (0.78 – 1.17 inches) of additional rain could accumulate. However, with the risk of thunderstorms both with the frontal rainband and also for a time following it, there is a possibility that rainfall accumulations will be higher in localized places – possibly 40 to 60 mm (1.57 – 2.36 inches).

This amount of rain could exacerbate the already saturated conditions in these areas, causing rivers and streams to rise further, with possible surface flooding and slips, MetService warns. 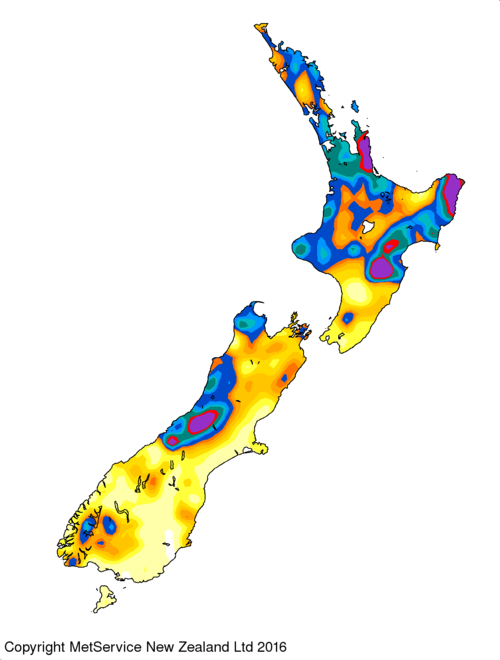 A change to westerly winds, which have been notably absent this spring, is expected with the new week.

"The air-flow for the first half of October is turning westerly and it's all because of this change coming in tomorrow. So it's not so much severe weather that it's bringing in it's more that it's bringing in a big change to the pattern that we've been seeing," said WeatherWatch head weather analyst Philip Duncan.

But a major shift in the weather patterns is about to take place.

"Spring is about to arrive with a bang, with westerlies set to kick-start October," said MetService Meteorologist Georgina Griffiths.

Equinoctial gales and fast-moving fronts are signaled to start the month, followed by frequent low pressure that is likely to favor the North Island. In line with these unsettled weather patterns, a wetter than usual October is predicted for most of New Zealand.