A very large fireball illuminated the sky over London, UK for 4 seconds at 03:16 UTC on March 17, 2016. The event was observed from the UK, the Netherlands, France and Belgium and recorded by 5 stations and 7 cameras operated by the United Kingdom Meteor Observation Network (UKMON).

Most observers indicate a magnitude in the range of -10 to -20, but some estimated its brightness at -25, that would make it comparable with the Sun, UKMON reports.

"Observant observers noted fragmentation of the body during the flight, and some of also report accompanying sonic effects. The palette of reported colours is quite varied, but predominant reports are of blue and green. Distribution of monitoring stations from reporting on IMO overview map shows the “density” reports of observers in each country." 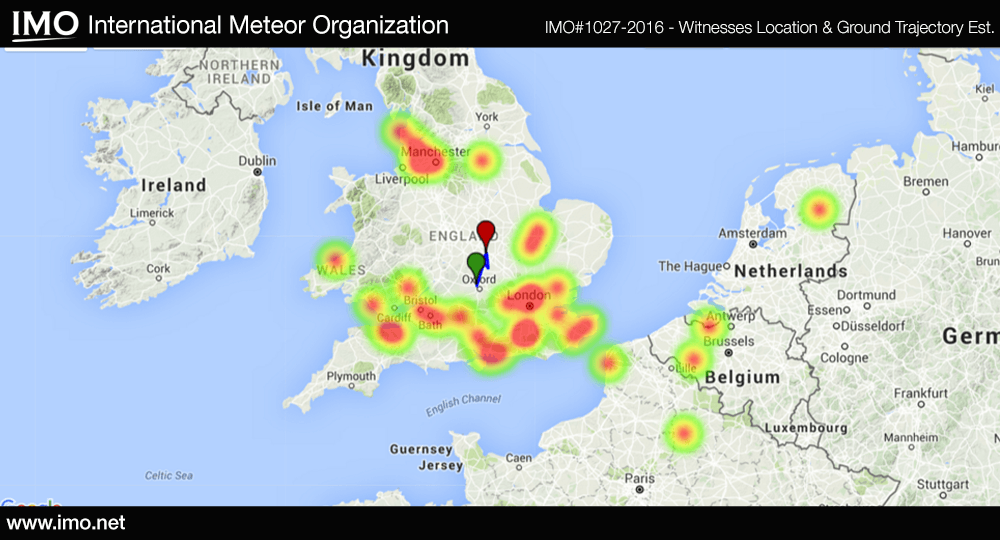 UKMON's calculation of meteoroid’s path through the Solar System used data from the initial phase of the bolide’s flight recorded by Norman Lockyer, Clanfield and Scotch Street stations.

"In this case, it was a relatively rapid meteor," UKMON explained.  "Geocentric speed before entering the earth’s gravitational field was 43.5 km/s (including the effect of deceleration, Dv / Dt = -0.7 km / s-2).  The orbital meteoroid path elements were as follows:

The bolide was a sporadic meteor (i.e. without affiliation to a known stream) with a geocentric Radiant RA = 205.4 °, DEC = -6.4 °. Projections of the meteoroid’s path through the Solar System is shown below (taking into account of deceleration on the geocentric velocity VG." 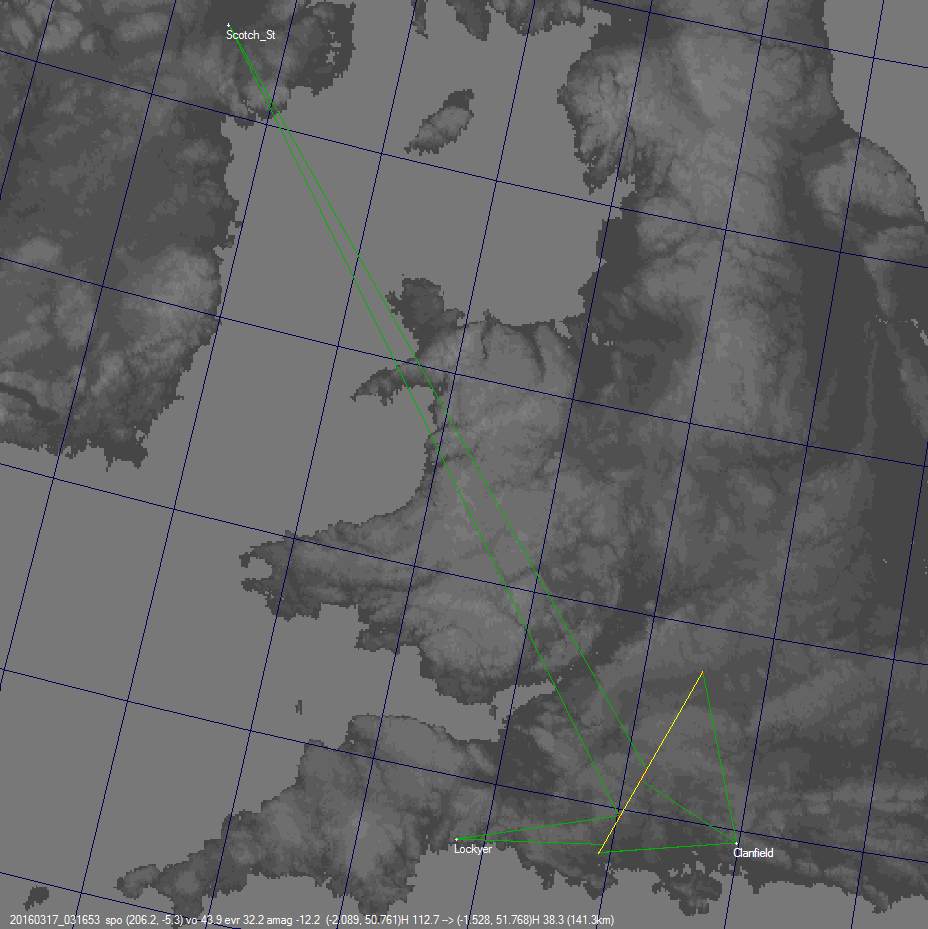 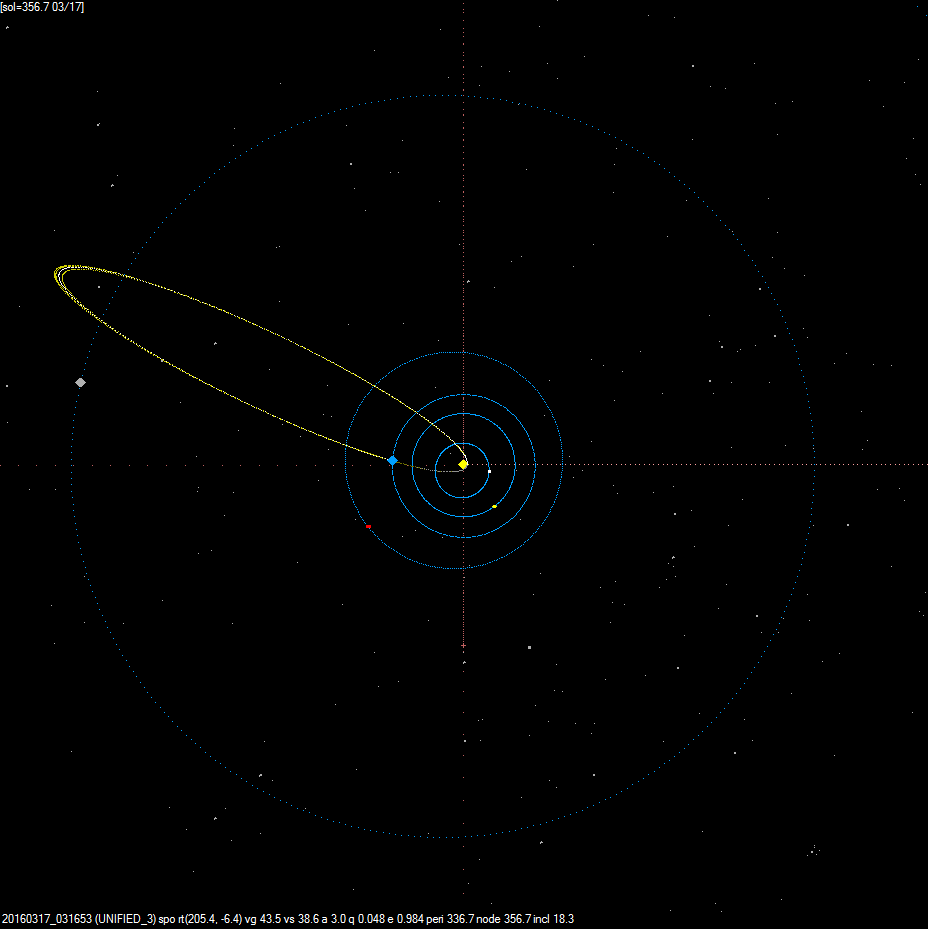 The highest absolute magnitude of the fireball measured from the Norman Lockyer station was -14.7, the absolute brightness of a unified path of the above stations was -13.6. The bolide traveled 141.3 km (87.8 miles) during the ablative phase of its flight through the Earth’s atmosphere having entered the atmosphere with a fairly low angle of 32.1 degrees.

Fragmentation first occurred at an altitude of 68.9 km (42.7 miles) at the speed of 43.2 km/s, and UKMON estimated that the mechanical strength of the body was 0.16 + -0.02 MPa. Entry speed into the atmosphere was 44.8 km/s and speed at its terminal altitude (38.3 km) was 26.6 km/s.  During the ablative phase of its flight through the Earth’s atmosphere, its mass could be established using am empirical equation (Jacchia, 1969) and was estimated to be 66kg+ -16 kg.  The meteoroid’s path through the Solar System indicates it is of a cometary origin. Its progenitor was probably a comet of low perihelion value, for example, or one of the Kracht or Marsden group of comets.

This orbit is very atypical for what we normally see. Most fireballs and bolides come from orbit between Mars and Jupiter this time of year, and we usually see much slower speeds when entering our atmosphere.

"Considering the origin of the meteoroid, terminal altitude and especially terminal velocity it’s practically impossible anything survived the entry or even fell on the ground as we saw lately with the case in Germany on March 6, 2016," UKMON concluded. 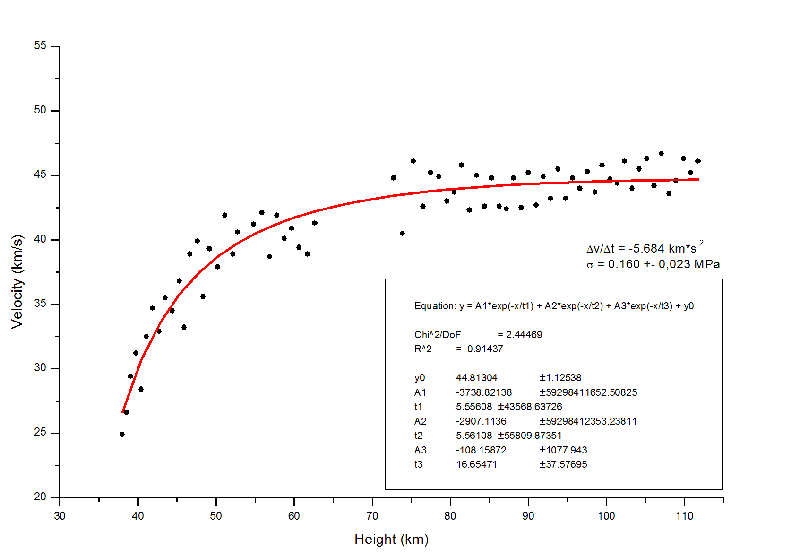