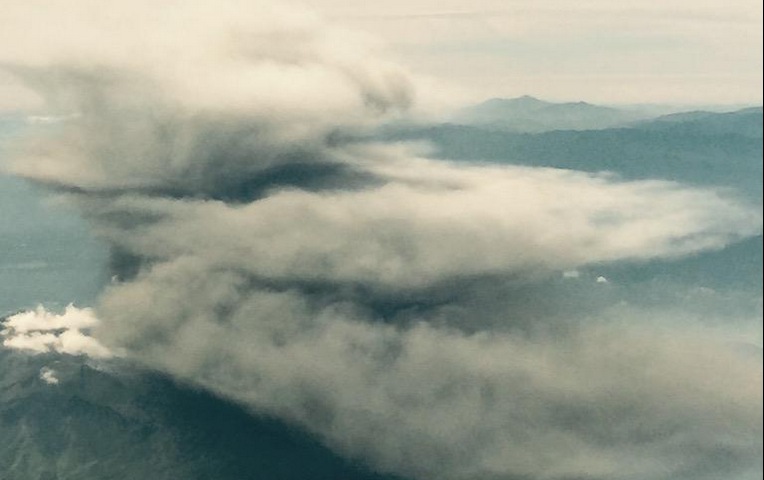 Japan's Asosan volcano erupted about 00:43 UTC on Monday, September 14, 2015, sending a plume of thick black smoke and ash about 2.1 km (1.2 miles) into the air and disrupting flights.

According to the Japan Meteorological Agency, Asosan erupted without warning in one of Nakadake craters. The agency has raised the volcanic alert level from 2 to 3 – do not approach the volcano.

According to media reports, there were about 100 tourists and other visitors in the vicinity of the volcano at the time of eruption, but they were all quickly evacuated. There are no reports of injuries.

JMA's senior coordinator for volcanic affairs, Sadayuki Kitagawa, warned that a second eruption was possible "with possibility of volcanic rocks landing in an area over a 1 km radius (0.62 miles)." Kitagawa urged people to be vigilant for flying rocks and ash within a 2 km radius.

The volcano had a series of small-scale eruptions last week, JMA said and added that today's eruption exceeds the scale of past events.

Asosan is famous volcano for its largest caldera in the world. It is located at the center of Kyushu, about 1 000 km WSW of capital Tokyo and about 160 km (100 miles) N of recently restarted Sendai nuclear plant. Plant's operator, Kyush Electric Power Co, said the eruption would have no impact on the nuclear plant.

The 24-km-wide Asosan caldera was formed during four major explosive eruptions from 300,000 to 90,000 years ago. These produced voluminous pyroclastic flows that covered much of Kyushu. The last of these, the Aso-4 eruption, produced more than 600 cu km of airfall tephra and pyroclastic-flow deposits. A group of 17 central cones was constructed in the middle of the caldera, one of which, Nakadake, is one of Japan's most active volcanoes. It was the location of Japan's first documented historical eruption in 553 AD.