Heavy rainstorm between Monday, July 13 and Tuesday, July 14, caused major flash flooding in the area of Eastern Kentucky. At least 150 homes have been damaged in Johnson County and about 60 houses in Rowan County while 19 000 people remain without electricity. At least 2 people are reported dead, while the number of people missing still remains unclear.

According to the Kentucky Division of Emergency Management (KYEM), the heaviest damage was reported in counties Johnson and Rowan. In Johnson County, one person died as he stepped out of the vehicle and was pulled in by the rising water. Another person was found dead on Tuesday, among debris leftovers of mobile homes destroyed by the flooding.

Emergency workers continue to search for the missing while the Kentucky National Guard, KYEM and Red Cross officials continue to monitor the areas for further reports of damage.

Yesterday, Governor Steve Beshear declared a state of emergency: “The declaration is a part of the process to identify what assistance is needed in these counties because of the storms. We will work with our local and federal partners to measure damage and make sure each community has access to appropriate resources.”

In the last 4 month a state of emergency was declared two times. Widespread damage caused by severe rainstorm and resulting floods in early April, caused the Governor to act. On April 3, 2015, 143 mm (5.64 inches) of rain was recorded in Kentucky and 131 mm (5.17 inches) in Lexington.

National Weather Service at Jackson, Kentucky, issued flood warnings for the South Fork Kentucky River at Booneville and the Kentucky River at Heidelberg and Ravenna, on July 15, stating: "Ongoing flooding was occurring across the area as runoff makes its way into larger creeks and streams. Heavy rainfall has exited. However, those that love by larger creeks and streams should be aware of additional rises through the overnight. Flood waters will gradually recede Wednesday morning".

The officials warned it is important to check the travel routes, as many roads are covered in water. A flood warning was also issued for counties Laurel, Wayne, Pulaski, Knox, Mccreary, Whitley and Bell. 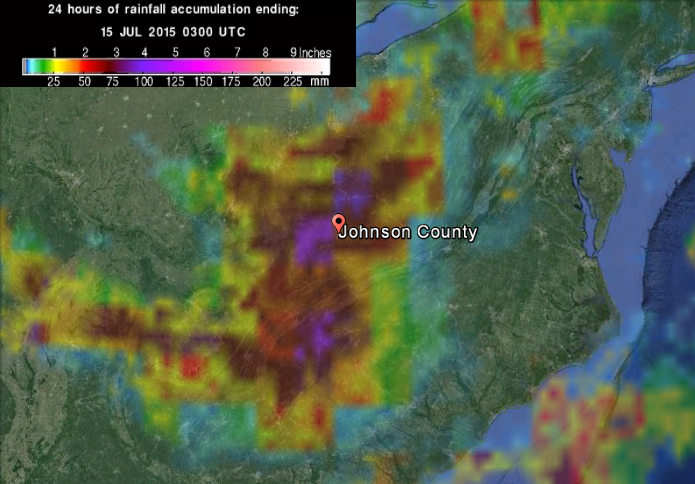 So far, 191 mm (7.52 inches) of rain fell in Jackson during this month, which measures more than 127 mm (5 inches) of rain above average for this time of the year, according to NWS.