Two new effusive fissures have opened up in the Holuhraun eruption (Bardarbunga volcano), about 2 kilometres north of the Dyngjujokull outlet glacier.  Lava is streaming out of the new fissures, but they are smaller than the one that started erupting last Sunday. The area around the Holuhraun eruption is now closed to all traffic.

According to RUV – The Icelandic National Broadcasting Service, the two new fissures are about 1,5 kilometers south of the previous eruption.

Volcanologist Thorvaldur Thordarson said large new surface cracks have been observed there in the last days, and a small rift valley (graben) has formed, which extends under the glacier.

According to Icelandic Met Office (IMO), earthquakes until 06:00 UTC today have been recorded in similar locations as in recent days: in Bárðarbunga, in the dyke intrusion beneath and north of Dyngjujökull and at Herðubreiðartögl.

Two earthquakes of magnitude 4.3 and 5.2 occurred on the rim of the Bárðarbunga caldera. The first earthquake was recorded at 23:33 UTC yesterday and the larger event at 01:19 UTC today.

Since midnight, the total number of automatically located earthquakes is around 100.

Web camera views of the eruption site during the night showed volcanic activity at similar levels to yesterday. See map. 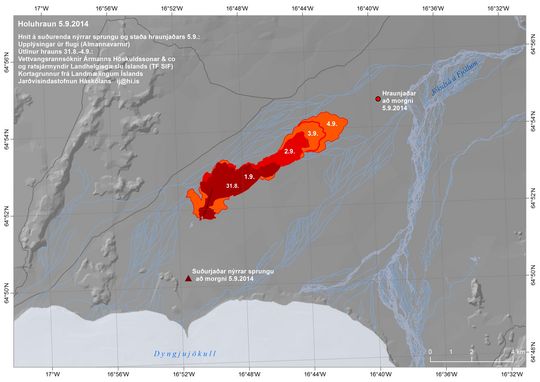 Institute of Earth Sciences University of Iceland September 5, 2014: New coordinates from surveillance flight. Edges of lava 31.8-4.9. based on radar images from TF-SIF of the Coast Guard and GPS measurements from the field (IES). Map base from the National Land Survey of Iceland.

Below is a satellite image which shows the drift of the plume. 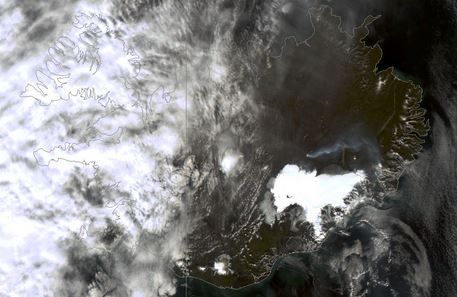 100m high lava fountains this morning! The one on right has always been active, left one formed Sept 2. #Bardarbunga pic.twitter.com/XQlNKZkUcW

Fire and ice. #Holuhraun eruption with #Dyngjujökul in the back.. Credit: Univ. of Iceland/Ágúst Þór Gunnlaugsson pic.twitter.com/NAa7bvK0X1

How about this! Pilot takes detour so passengers can see #Bardarbunga eruption @Icelandair http://t.co/PN6q05n3l1 pic.twitter.com/LdO5KEZsqK