A new study by Sebastian Ostberg of the Potsdam Institute for Climate Impact Research, Germany and collaborators (Lucht/Schaphoff/Gerten) reveals that over 80% of the world's ice-free land is at risk of significant ecosystem transformation by 2100. New study stressed nearly no area of the world is free from the risk of climate change transforming landscapes substantially, unless mitigation limits warming to around 2 degrees Celsius above preindustrial levels.

Boreal forests could transform into temperate savannas, trees could grow in Arctic tundra while some of the world's rainforests could vanish. Such profound transformations of land ecosystems have the potential to affect food and water security, and hence impact human well-being just like sea level rise and direct damage from extreme weather events. Ostberg explains that any significant change in the underlying biogeochemistry presents an ecological adaptation challenge, fundamentally destabilizing our natural systems.

Scientists studied the critical impacts of climate change on landscapes and published their results in Earth System Dynamics, an open access journal of the European Geosciences Union (EGU). The researchers studied over 150 climate scenarios, looking at ecosystem changes in nearly 20 different climate models for various degrees of global warming. According to scientists, it is the most comprehensive and internally consistent analysis of the risk of major ecosystem change from climate change at the global scale. 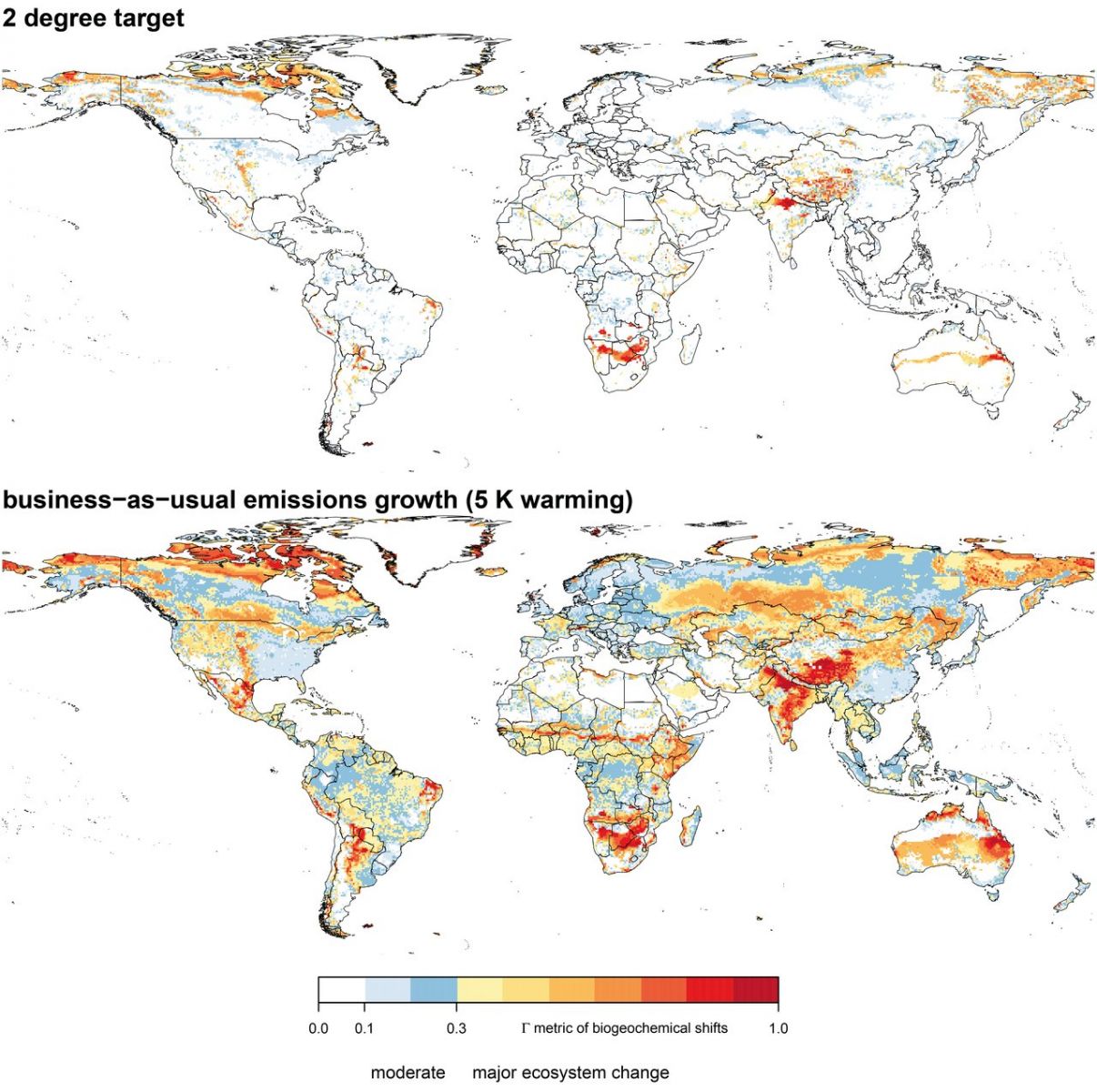 Simulated ecosystem change by 2100, depending on the degree of global temperature increase: 2 degrees Celsius (upper image) or five degrees Celsius (lower image) above preindustrial levels. The parameter G (Gamma) measures how far apart a future ecosystem under climate change would be from the present state. Blue colors (lower G) depict areas of moderate change, yellow to red areas (higher G) show major change. The maps show the median value of the G parameter across all climate models, meaning at least half of the models agree on major change in the yellow to red areas, and at least half of the models are below the threshold for major change in the blue areas. (Credit: Ostberg/Potsdam Institute for Climate Impact Research)

The new Earth System Dynamics study indicates that up to 86% of the remaining natural land ecosystems worldwide could be at risk of major change in a "business-as-usual" scenario in which the global mean temperature will be 4 to 5 degrees warmer at the end of this century than in pre-industrial times. Given many countries reluctance to commit to binding emissions cuts, such warming is not out of the question by 2100. Even though 86% of land ecosystems are at risk if global temperature increases by 5 degrees Celsius by 2100, it is unlikely all these areas will be affected.

However, even if the warming is limited to 2 degrees, some 20% of land ecosystems are at risk of moderate or major transformation, especially those at high altitudes and high latitudes.

The team measured simultaneous changes in the biogeochemistry of terrestrial vegetation and the relative abundance of different vegetation species, the carbon storage in the soils and vegetation, and freshwater availability. Researchers hope the new results can help inform the ongoing negotiations on climate mitigation targets, as well as planning adaptation to unavoidable change.

This research is presented in the paper 'Critical impacts of global warming on land ecosystems' to appear in the EGU open access journal Earth System Dynamics on October 8, 2013. The scientific article is available online.