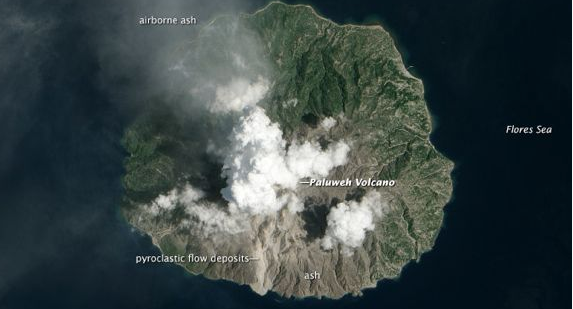 Rokatenda is erupting with fierce explosions for many months. It has been on high alert (Siaga, 3/4) since October 2012. Authorities banned people from any activity within three kilometers from the crater. Mr Surono said people were killed within exclusion zone and added it was not clear what the people were doing in the restricted area.

The volcano began erupting at 20:27 UTC (August 9) / 04:27 am local time on August 10, and continued for nearly 4 hours. Sources are reporting that the ash cloud went 2000 meter above the crater. These clouds are normally not very damaging, but the pyroclastic flows down the hills are extremely dangerous.

Rokatenda, forms the 8-km-wide island of Paluweh N of the volcanic arc that cuts across Flores Island. Although the volcano rises about 3,000 m above the sea floor, its summit reaches only 875 m above sea level. The broad irregular summit region contains overlapping craters up to 900 m wide and several lava domes. Several flank vents occur along a NW-trending fissure.

The largest historical eruption of Paluweh occurred in 1928, when a strong explosive eruption was accompanied by landslide-induced tsunamis and lava-dome emplacement.

Featured image: A NASA satellite image of Rokatenda Meletos or Paluweh volcano as captured on February 12, 2013