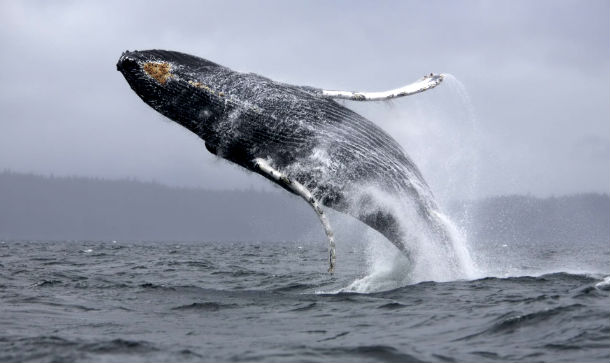 The area of the ocean off the California coast, where blue whales often feed, is also the site of military training and testing exercises that involve loud mid-frequency sonar signals. Some blue whales off the coast of California have been seen to change their behavior when exposed to underwater sounds used during U.S. military exercises.

Active sonar systems produce intense sound waves that sweep the ocean, revealing objects in their path. Some systems operate at more than 235 decibels, producing sound waves that can travel across tens or even hundreds of miles of ocean. During testing off the California coast, noise from the Navy's main low-frequency sonar system was detected across the breadth of the northern Pacific Ocean. By the Navy's own estimates, even 300 miles from the source, these sonic waves can retain an intensity of 140 decibels – a hundred times more intense than the level known to alter the behavior of large whales. The Navy’s most widely used sonar systems operate in the mid-frequency range. The military induced soundwaves range between 1 and 10 kHz, which is within the human hearing band.

Researchers from the University of California in Santa Cruz and the Southern California Behavioral Response Study (SoCal-BRS) tagged the whales with non-invasive suction cups sensors, which recorded acoustic data and high-resolution movements as the animals were exposed to the controlled sounds. Researchers exposed tagged blue whales to simulated sonar sounds significantly less intense than the military uses. Whales clearly respond in some conditions by modifying diving behavior and temporarily avoiding areas where sounds were produced. Researchers found that some of the whales that had been engaged in deep feeding stopped eating and either sped up or moved away from the source of the noise. 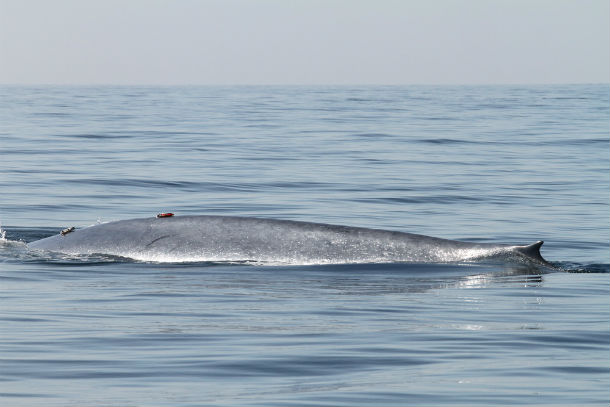 Two new publications on the results from the SOCAL BRS project were released on July 3, 2013 and provide the first direct measurements of individual responses for any baleen whale species to these kinds of mid-frequency sonar signals. Proceedings of the Royal Society B released a study from Dr Jeremy Goldbogen of Cascadia Research Collective in which his team of researchers calculated that a blue whale has a feeding rate of 19 kg of krill a minute before exposure to sonar sound. When the whale heard the simulated sonar, it stopped foraging for 62 minutes, resulting in a loss of more than a ton of krill.

Several submarine exercises in recent years have been linked to numerous whale mass strandings. Military-sponsored tests show that low levels of sonar do not cause direct damage to whales, but they admit that they could still cause harm by triggering behavioral changes.

According to an unpublished UK military report from 2007, published by Nature on August 1, 2008 after a request under the Freedom of Information Act 2000, whales subjected to military sonar appear to cease vocalizing and foraging for food in the area around active sonar transmissions.

Woods Hole Oceanographic Institution in Massachusetts released a study in 2008 which monitored the response of a tagged beaked whale to both sonar and killer-whale calls, at levels that would not pose any risk to the animals. With the same results.

Watch an interesting video released by EarthJustice, showing underwater audio of Navy sonar in May 2003 at Puget Sound, Washington, US and behavior of whales during the event.

According to NRDC, the Navy estimates that increased sonar training will significantly harm marine mammals more than 10 million times during the next five years off the U.S. coast alone. Mass strandings linked to military sonars have occurred in the US, Canary Islands, Greece, Madeira, the U.S. Virgin Islands, Hawaii and other sites around the globe.