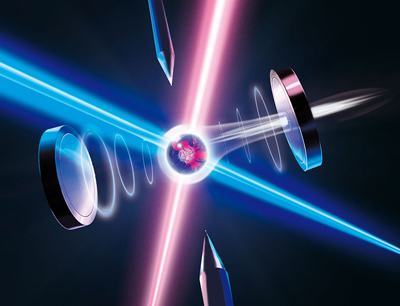 We have heard about quantum computing a lot of times – computations based on quantum mechanics, unlike conventional computing, which relies on transistors and requires data encoding into binary digits. Quantum computers are expected to carry out certain computational tasks faster than their conventional counterparts, though there was lack of viable interfaces for communication between quantum computers. Recently, University of Innsbruck researchers found a way to transport quantum information at speed of light through optical fibers.

Future quantum computers will comprise single atom systems – confined in ion traps and manipulable with lasers, and have already been tested in labs. Andreas Stute and Bernardo Casabone, both PhD students at the University of Innsbruck’s Institute for Experimental Physics explain,

“Currently, we can carry out successful quantum computations with atoms. But we are still missing viable interfaces with which quantum information can be transferred over optical channels from one computer to another.”

Laws of quantum mechanics don’t allow quantum information to be simply copied – an obstacle in construction of these interfaces. Hypothetical quantum internet, a network of quantum computers linked by optical channels, would have to transfer quantum information onto individual particles of light, known as photons.  For communication, these photons would then be transported over an optical-fiber link to a distant computing site.  Now, for the first time, quantum information has been directly transferred from an atom in an ion trap onto a single photon.

The University of Innsbruck physicists first trap a single calcium ion in an ion trap and position it between two highly reflective mirrors.  The photon is stored between the mirrors until it eventually flies out through one mirror, which is less reflective than the other. Stute further explains,

Casabone says, “The two mirrors steer the photon in a specific direction, effectively guiding it into an optical fiber.” The quantum information stored in the photon could thus be conveyed over the optical fiber to a distant quantum computer, where the same technique could be applied in reverse to write it back onto an atom.

Research was funded by  the Austrian Science Funds and by the European Union. Findings were published on February 3, 2013 in latest issue of Nature Photonics by a research team led by Tracy Northup and Rainer Blatt.

The atom’s quantum information is written onto the polarization state of the photon.