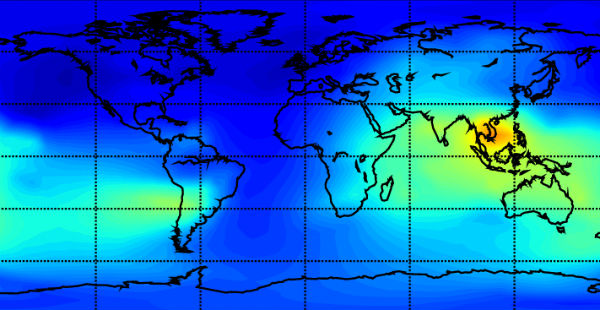 The passage of an interplanetary shock (CME) was recorded at 21:56 UTC on November 23, 2012. ACE spacecraft measured a geomagnetic sudden impulse of 25nT. The maximum southward component of Bz was -8.8 nT at 21:12 UTC on November 23. The primary Coronal Mass Ejection (CME) responsible for this storming was associated with a solar flare from NOAA Region 1618 that peaked at the R1 (Minor) level on November 21 at 15:30 UTC. NOAA/SWPC issued a Warning of expected geomagnetic K-index of 5 or Minor G1 geomagnetic storm. 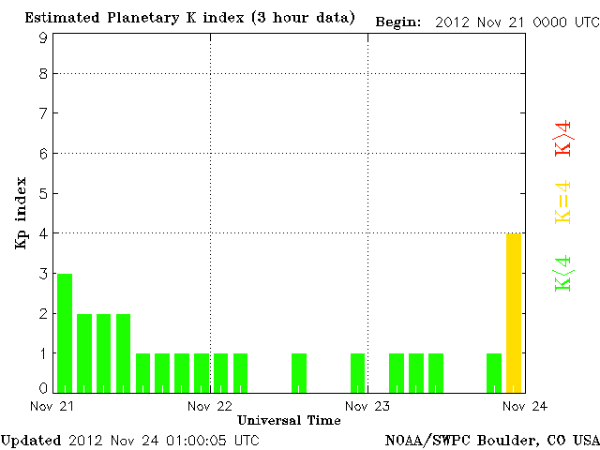 The greater than 2 MeV electron flux at geosynchronous orbit reached a maximum of 1408 pfu. According to NOAA/SWPC report, geomagnetic field activity is expected to begin at active levels and reach major storm levels early on November 24 with the effects from the November 20 CME coupled with the anticipated arrival of the November 21 CME. On day two (25 Nov), conditions are expected to return to unsettled to active levels due to residual CME effects combined with a coronal hole high-speed stream. The unsettled levels may persist into day three (26 November). 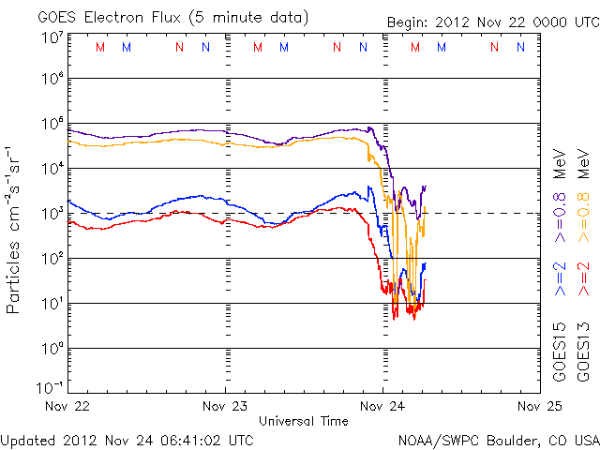 A long filament in the south-east of the solar disc erupted today creating an Earth directed CME, seen first at 13:54 UTC by COR2 on STEREO Ahead and at 14:10 UTC on STEREO-B with a calculated speed of 533 km/s. An arrival and corresponding geomagnetic storm at Earth can be expected on November 26. Although most of the plasma cloud is heading south,some portion of the cloud may be Earth directed.

The largest solar event of the period was registered as C1 event observed at 12:12 UTC  from Region 1618. Although this region retained its beta-gamma-delta magnetic characteristics, it experienced intermediate penumbral decay. All other regions on the disk remained stable and quiet.

The subsequent CME was observed in STEREO-A and B COR2 imagery around 14:00 UTC on November 23. Using geometric localization, a preliminary speed of approximately 550 km/s was obtained. This suggests an arrival at Earth early on 27 November.