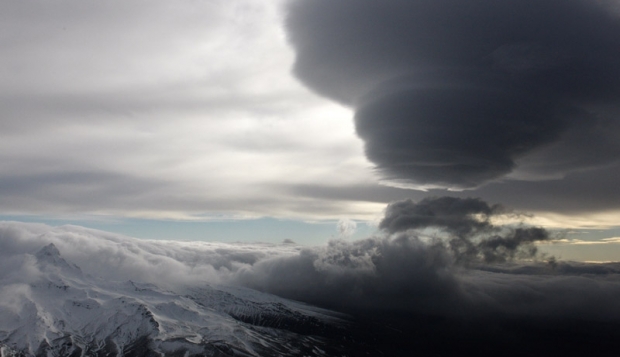 New Zealand’s Mount Tongariro erupted on August 6, 2012, spewing a cloud of ash over North Island, closing roads, and cancelling domestic flights. The Volcanic Alert Level for Tongariro was elevated from 1 to 2 and the Aviation Colour Code from yellow to red on August 7.

Tongariro is a complex of multiple volcanic cones constructed over a period of 275,000 years. There have been five reported eruptions from the Te Māri craters between 1855 and 1897 and these have since been dormant. 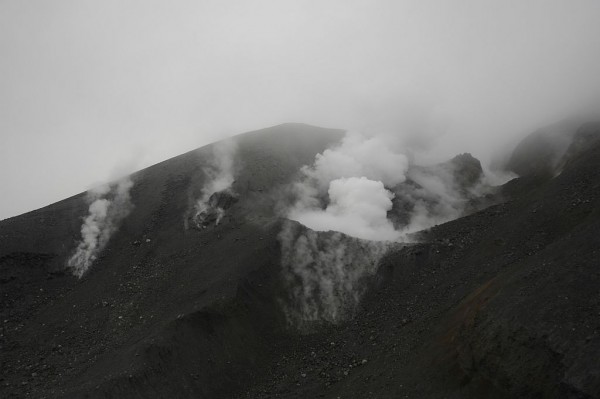 According to GeoNet, current activity is weak with some steaming vents visible below the cloud level. Explosions at a new vent area below the Upper Te Māri crater have thrown blocks out more than 1.5 km. Current eruptive activity is low-level but could re-commence at any time. The Aviation Colour Code is reduced to Yellow, which recognises that activity has decreased but renewed unrest is possible. 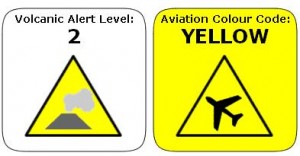 Seismic activity remains at a low-level with only a few small events being recorded today. These observations and current monitoring data do not change the prognosis for future eruptions. Actively steaming vents were visible at a new crater area below Upper Te Māri crater but low cloud prevented any views above this elevation.

No vents have opened in or around the Lower Te Māri crater, or at lower elevations on the mountain. There are no new vents or craters at the Ketetahi thermal area. Previously steaming ground at Ketetahi and Lower Te Māri crater appears more vigorous, but there were no obvious major changes there. 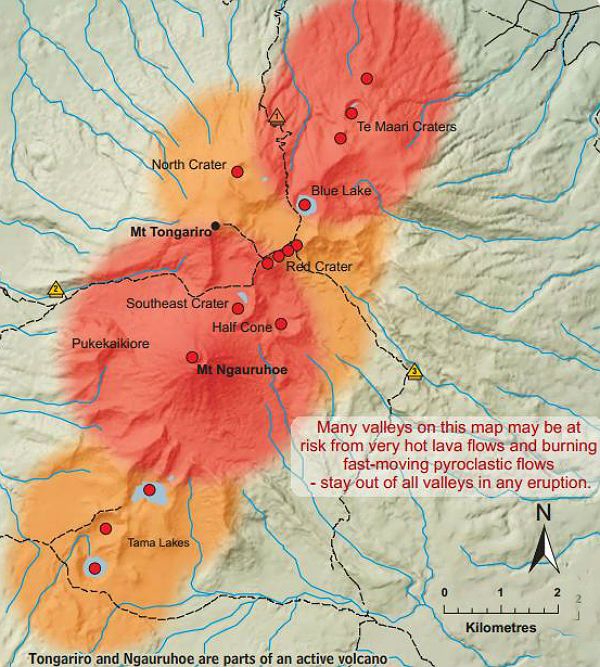 Blocks of old lava and hydrothermally altered lava up to approximately 1 metre size have been ejected by the eruption. There are extensive areas to the east and west of the new vents where falling blocks have formed impact craters in the ground. No burnt vegetation was seen. No steaming hot blocks were visible and all appeared to be angular shapes more typical of existing old rock, rather than fresh lava or scoria. Most blocks were covered by grey ash but many on the western slopes were not, which suggests that they were ejected after the main ash-producing phase of the eruption had finished. Blocks had reached 1.5 km to 2 km from the Te Māri craters area. 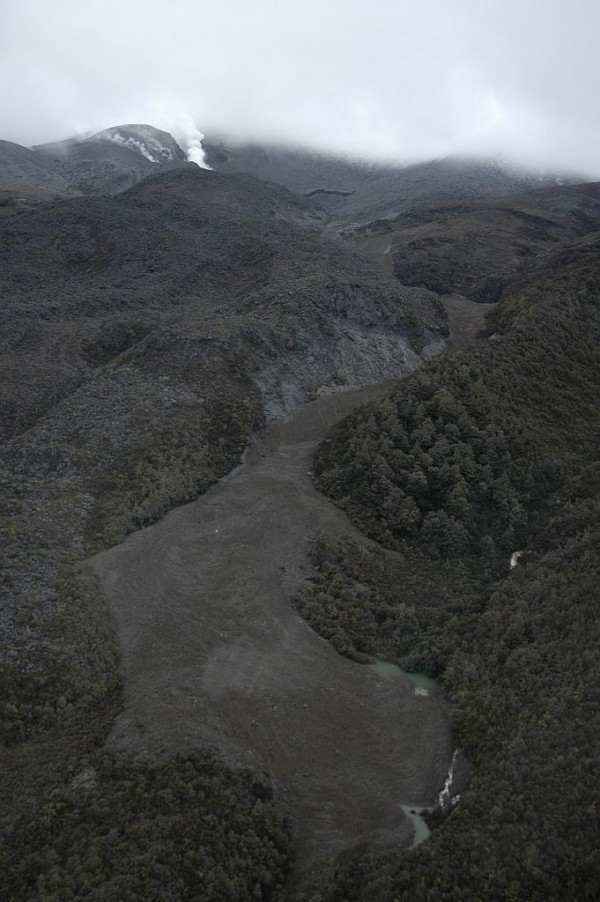 New rock falls were visible around the walls of the new vent area and Lower Te Māri craters and in some stream valley walls near the craters. This is a sign that significant ground shaking took place during Monday night’s eruption. 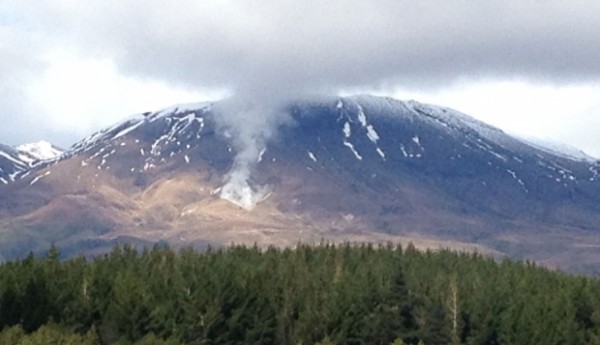 According to New Zealand’s Ministry of Civil Defence and Emergency Management on August 7, the eruption activity seems to have subsided. White steam clouds were observed at the historically active Te Maari craters area. There was no ash being produced from the volcano at the time. There have been no lahars or pyroclastic flows or lava flows. GeoNet has published a screengrab from the Tongariro webcam. 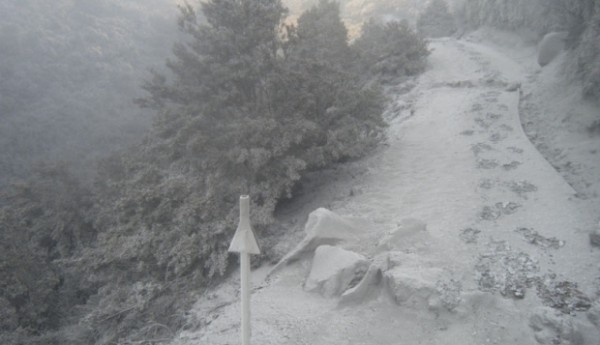 While Civil Defence cancelled the alert issued after the eruption because of subsided volcanic activity, GNS Science said there was a possibility it could blow again. GNS Science said it was not ruling out further eruptions and expected heightened activity to continue for several weeks, but said it was too early to predict the next series of events.

The first appearance of the ash plume occurred far downwind of Tongariro in thermal imagery because ash was lofted high enough to produce a strong thermal contrast in the atmosphere. Tongariro sent ash at least 6,096 meters (20,000 feet) into the air. Because of the impact to aircraft operations, the New Zealand Civil Aviation Authority issued advisories to re-route air traffic around the ash plume so as to avoid damage to aircraft engines. 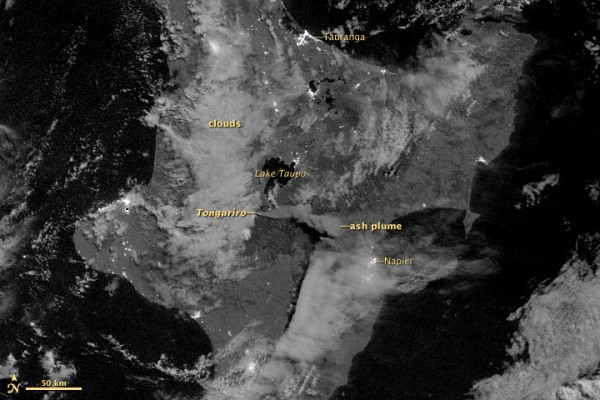 A new satellite equipped with low-light imaging technology was able to capture the event in the dark of night, just an hour after it began.

The detection of volcanic plumes is useful because ash can endanger airplanes in flight. Volcanic ash is very different in composition than the biomass smoke produced by a forest fire. Very often volcanic ash contains microscopic fragments of volcanic glass (obsidian), and the turbine engines of commercial aircraft produce a level of heat sufficient to melt glass. The ash can melt onto the turbine blades and other parts of the engine, causing damage and even engine stalls. It also presents hazards to pilot visibility, causing pits and frosting on the windshields in the same way that a sandstorm damages an automobile windshield. 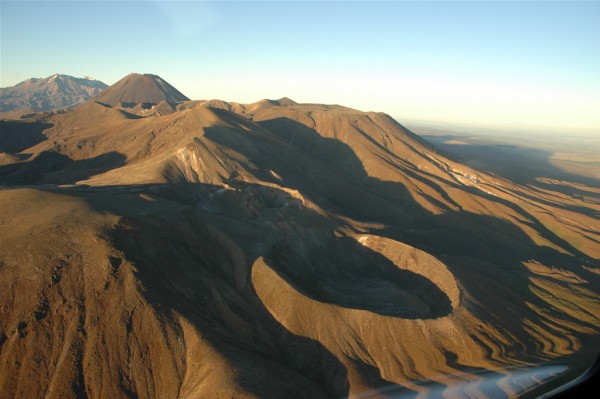 The 1,978-meter (6,490 foot) peak is a part of the “circum-Pacific seismic belt” or “Ring of Fire” region known for its seismic activity and volcanism.

Check out giant Gigapan panoramas of Red Crater, the South Crater and the Mangatepopo Valley at the start of the Tongariro Crossing.

Tongariro is a large andesitic volcanic massif, located immediately NE of Ruapehu volcano, that is composed of more than a dozen composite cones constructed over a period of 275,000 years. Vents along a NE-trending zone extending from Saddle Cone (below Ruapehu volcano) to Te Mari crater (including vents at the present-day location of Ngauruhoe) were active during a several hundred year-long period around 10,000 years ago, producing the largest known eruptions at the Tongariro complex during the Holocene.

North Crater stratovolcano, one of the largest features of the massif, is truncated by a broad, shallow crater filled by a solidified lava lake that is cut on the NW side by a small explosion crater. The youngest cone of the complex, Ngauruhoe, has grown to become the highest peak of the massif since its birth about 2500 years ago. The symmetrical, steep-sided Ngauruhoe, along with its neighbor Ruapehu to the south, have been New Zealand’s most active volcanoes during historical time. (Global Volcanism Program)