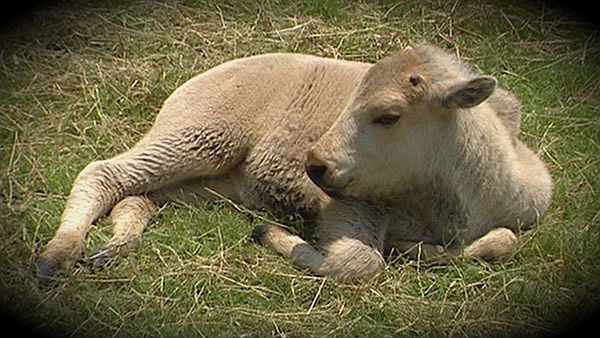 Lightning Medicine Cloud, a white buffalo, was born onto Arby Little Soldier’s Lakota Ranch with great ceremony. Now, at just under one-year-old, the sacred and rare calf is dead. Authorities believe the animal and his mother were intentionally killed. Lightning Medicine Cloud’s father had been killed by a lightning strike last month. A one-year birthday party was planned for Lightening Medicine Cloud for next week. The event will continue as a memorial.

As legend goes, chances are one in 10 million that a white buffalo will ever enter this world. The white buffalo was born on May 12 last year during the intense power of a driving thunderstorm. The white buffalo was born on Arby Little Soldier’s ranch in Hunt County. Little Soldier is part Mandan Indian, part Lakota; he says he is also a great grandson of Sitting Bull. While all the other buffaloes on Little Soldier’s ranch belong to him, he said the white one belongs to all people and nations. He believes, and custom dictates, that the animal’s existence is a powerful message, but its meaning is not yet known. A rare white buffalo calf regarded as sacred by Lakota Sioux tradition has officially been named at a ceremony drawing about 2,000 people to a northeast Texas ranch.

The name Lightning Medicine Cloud is also a tribute to the first known white buffalo in Texas born in 1933. Lakota Sioux tradition holds that Whope (HOH’-pah), the goddess of peace, once appeared in the form of a white buffalo calf. Little Soldier says the buffalo represents hope for all nations and races.

“The message that was brought here to this ranch, he brought strong and it will carry on. It’s not gonna quit. It’s never going to quit.” Arby Little Soldier

White buffalo are extremely rare. To be considered sacred they must also have certain markings – black nose, black eyes and black-tipped tail. Lightning Medicine Cloud was the third with all markings. And the fourth in Lakota’s Native American prophecy represents the end of the last days.

In this video bellow you can watch  Chief Arvol Looking Horse speaks of White Buffalo Prophecy: