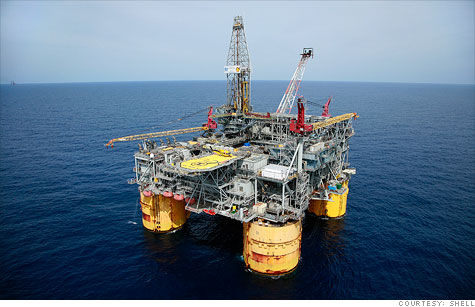 Royal Dutch Shell says a sheen of oil, 10 square miles in size (26 square kilometers), has been spotted in the Gulf of Mexico on late Wednesday, April 11, 2012 and was reported to National Response Center.

The sheen is one mile wide and ten miles long and is located in the middle of the Gulf of Mexico, between its Mars and Ursa drilling platforms. The platforms are both located 130 miles (209 km) southeast of New Orleans.

Shell said there is “no current indication that the sheen originates from wells in either the Mars or Ursa projects,” and that they have activated the Louisiana Responder, an oil spill response vessel that has skimming and boom capabilities.

One of the worst spills in history occurred in the Gulf of Mexico two years ago, when BP’s Deepwater Horizon rig exploded, killing 11 workers. The resulting spill fouled the coastline of Louisiana and neighboring states, damaging both the environment and the economy.