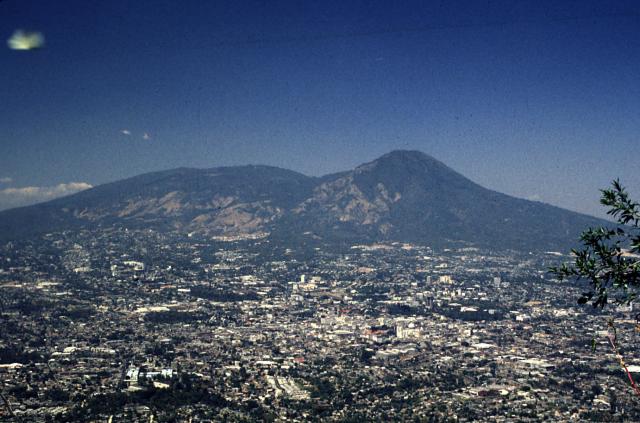 The Mexican 7.4 magnitude earthquake near Acapulco on March 20, 2012 might have affected the currently dormant San Salvador volcano in 1000 km distance and triggered an earthquake swarm under the volcano.

San Salvador volcano is an active stratovolcano immediately northwest of the capital San Salvador City and last erupted in 1917.

The National Service of Territorial Studies (SNET) reported that as of March 21 at 05:30 pm local time, the swarm consisted of 25 quakes, including 8 felt quakes between magnitude 2.2 and 3.3. The quakes were located at shallow depths between 0.5 and 5.8 km under the volcano.

The Red Cross is reported to have sent some members to the volcano area as a precautionary measure, although there were no reports of casualties or damage.

It is possible that the strong Mexican earthquake was the trigger for this swarm as a result of tectonic disturbance of the magma chamber beneath the volcano.

Relationships between large earthquakes and volcanic eruptions with effects occurring up to a year after the quake have long been suggested, but are difficult to proof.

San Salvador volcano is a massive stratovolcano immediately northwestwest of El Salvador city. Its modern summit cone is also called the Boqueron stratovolcano. It formed within a 6 km wide caldera left by the collapse of the predecessor volcano about 40,000 years ago. Remnants of the caldera rim form the Picacho and Jabalí peaks.

Boqueron volcano is truncated by a steep-walled, 500 m deep and 1500 m wide summit crater, which formed during a large eruption about 800 years ago. Before the last eruption in 1917, the crater of Boqueron contained a 400 m wide lake, which was replaced by a small, 30 m high young cinder cone, called Boqueroncito, built during the eruption along with a major lava flow on the north flank.

Three fracture zones that extend beyond the base of San Salvador volcano have been the locus for numerous flank eruptions, including two that formed maars on the WNW and SE sides.

Most of the four historical eruptions recorded since the 16th century have originated from flank vents, including two in the 17th century from the NW-flank cone of El Playón, during which explosions and a lava flow damaged inhabited areas.