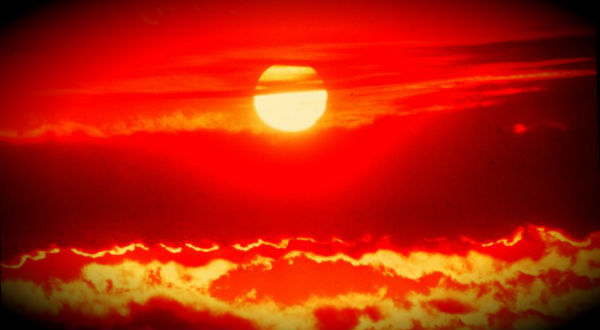 A huge, lingering ridge of high pressure over the eastern half of the United States brought summer-like temperatures to North America in March 2012. The warm weather shattered records across the central and eastern United States and much of Canada. The unseasonable warmth broke temperature records in more than 1,054 locations between March 13–19, as well daily lows in 627 locations, according to Hamweather. Cities as geographically diverse as Chicago, Des Moines, Traverse City (Michigan), Myrtle Beach, Madison (Wisconsin), Atlantic City, New York City, and Duluth, (Minnesota) all broke records for high temperatures in recent days. 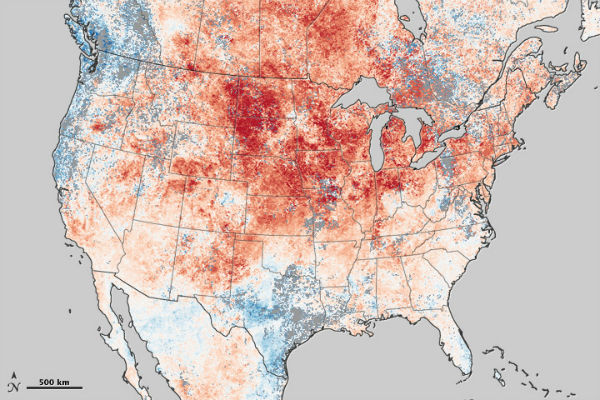 Land surface temperatures are distinct from the air temperatures that meteorological stations typically measure. LSTs indicate how hot the surface of the Earth in a particular location would feel to the touch. From a satellite vantage point, the “surface” includes a number of materials that capture and retain heat, such as sand in the desert, the dark roof of a building, or the pavement of a road. As a result, daytime land surface temperature are usually much higher than air temperatures—something that anyone who has walked barefoot across a parking lot on a summer afternoon knows instinctively. 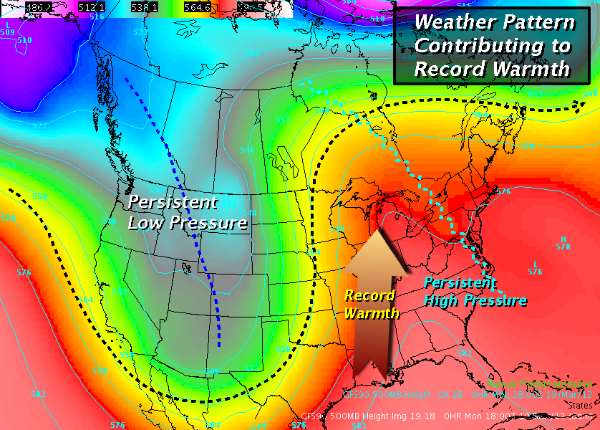 Records are not only being broken across the country, they’re being broken in unusual ways. Chicago, for example, saw temperatures above 26.6°Celsius (80°Fahrenheit) every day between March 14-18, breaking records on all five days. For context, the National Weather Service noted that Chicago typically averages only one day in the eighties each in April. And only once in 140 years of weather observations has April produced as many 80°Fahrenheit days as this March. Meanwhile,Climate Central reported that in Rochester, Minnesota. the overnight low temperature on March 18 was 16.6°Celsius (62°Fahrenheit), a temperature so high it beat the record high of 15.5°Celsius (60°Fahrenheit) for the same date. After a couple record breaking highs and a week of 60+ degree days in forecast, spring flowers are springing out really early. This rain storm is only going to make this columbine and other things grow even more. (EarthObservatory)

Chicago has set seven record highs in a row with temperatures climbing above-normal for July 4th on Tuesday, the first day of spring. The high soared to 85 degrees on Tuesday, March 20, 2012, shattering the old record high of 76 degrees for the date set way back in 1921. The normal high for March 20th in Chicago is 48 degrees, while the normal high on July 4th is 84 degrees. High temperatures have been more than 15 degrees above normal in Chicago for 10 straight days, since March 10, 2012. The average temperature so far this month is 16.6 degrees above normal.

In Chicago, the warmest March on record occurred in 1910 and then in 1945, which both averaged 48.6 degrees. Through March 19th, the average monthly temperature for March 2012 for Chicago-O’Hare was an amazing 51.4, which would already break the record! 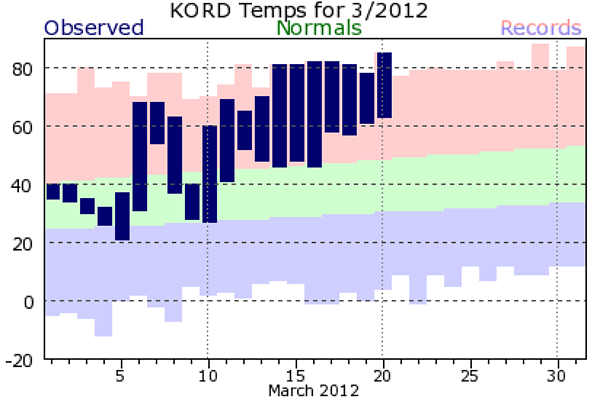 The National Weather Service forecast office in Chicago offered some perspective on the record warmth in a statement on its website:

“80°F warmth is not very common even in April . . . let alone early to mid-March. Chicago only averages about one day in the 80’s in April each year. Only once in the 140 recorded years of weather observations has April produced as many 80-degree days as have been observed this March. That was set back in 1977 when eight days as the thermometer peaked above 80°F . . . 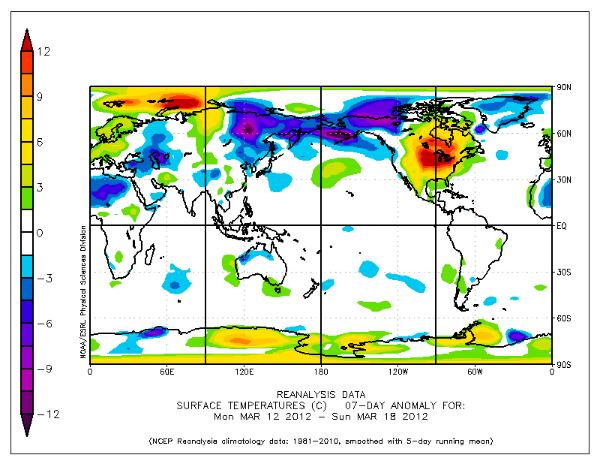 What is Causing the Unusual Summerlike Warmth?

The jet stream has been located far to the north across central and eastern Canada, allowing mild air to surge into the eastern two thirds of the nation. A large dome of high pressure dominating over the western Atlantic off the East Coast has been acting as a pump of warm air.

In a long-term trend that has been linked to global climate change, daily record-high temperatures have recently been outpacing daily record-lows by an average of 2-to-1, and this imbalance is expected to grow as the climate continues to warm. According to a 2009 study, if the climate were not warming, this ratio would be expected to be even.

The backdrop for these warm weather records is an atmosphere that’s bulking up. Levels of carbon dioxide and methane (two key greenhouse gases) are higher than they’ve been in at least 800,000 years, and global temperatures over the last decade are unsurpassed in the modern climate record. All 11 years of the 21st century rank among the 13 warmest globally since 1880 according to NOAA. 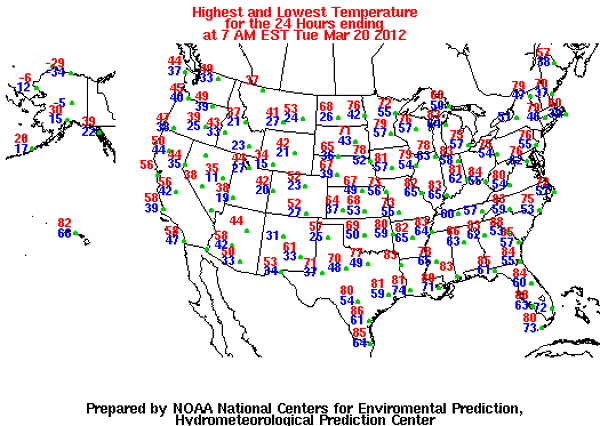