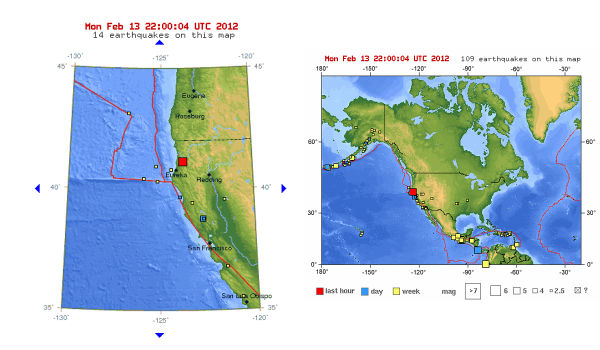 Earthquake Report website reports that Eureka with population of 26,000 people and Arcata with population 17,000 people are the most populated cities in this mainly sparsely populated area. Eureka and Arcata have experienced a light MMI IV shaking. McKinleyville has a population of 15,000 and has also experienced a light shaking. USGS PAGER issued green alert for economic losses and estimated fatalities (a low likelihood of casualties and damage). Eureka Police Department had no reports of damage. The temblor was widely felt and that the shaking lasted 30 to 45 seconds.

Northern California Seismic Network (NCSN) say that at this time (immediately after the mainshock) the probability of a strong and possibly damaging aftershock in the next seven days is approximately 28 %. Most likely, the recent mainshock will be the largest in the sequence. However, there is a small chance (5 to 10%) of an earthquake equal to or larger than this mainshock in the next 7 days. In addition, approximately 12 to 40 small aftershocks are expected in the same 7-day period and may be felt locally. (NCSN Propability Report – February 13, 2012 @ 21:18:03 UTC) 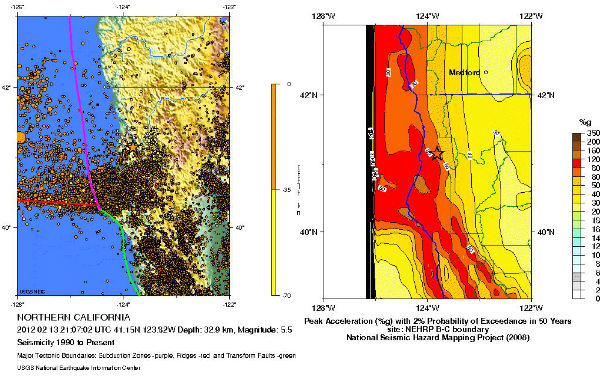 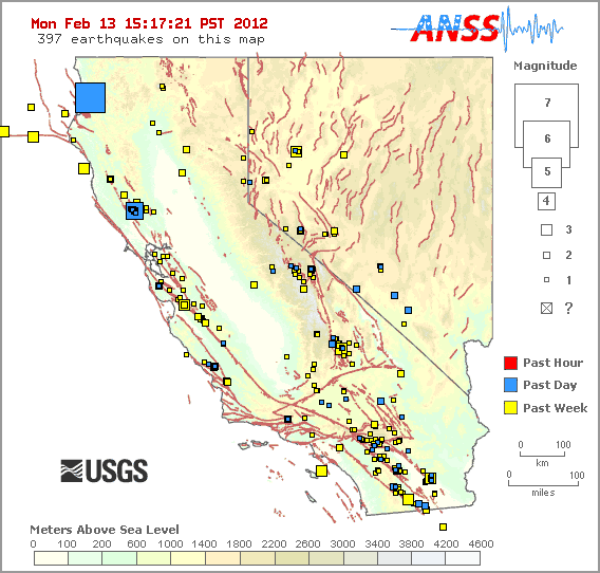 Northwestern California has been shaped by the forces of plate tectonics. This process causes plates of the Earth’s crust to collide, resulting in uplifting of the land, great earthquakes and major geologic instability. Until plate tectonics were discovered in the 1970’s, the varied assemblage of rock types in the Coast Range was a puzzle to geologists but it has now been recognized that the rocks are remnants of vast areas of the sea floor and fragments of the continental margin.

The best known geologic feature in northern California is the San Andreas fault, which extends north along the coast from San Francisco and ends at the “Triple Junction” offshore of Cape Mendocino. The Triple Junction is where the American Plate, Pacific Plate and the Gorda Plate meet. Earthquake hazards are greater to the north of the San Andreas fault because this region is part of the Cascadia subduction zone, where plate collisions increase the potential for huge earthquakes.

Tectonic forces drive the Gorda Plate into the American Plate, pushing the Gorda under the American. Every 300 to 600 years, earthquakes measuring 9.0 or greater on the Richter scale completely reform the landscape, releasing the great pressures built up by the collision. The plate collisions compress the edge of the American Plate, causing substantial uplifting and the ongoing formation of the Coast Range with ridges and valleys trending north-south. This orientation of the Coast Range also continues to the south due to the San Andreas Fault. (KrisWeb)