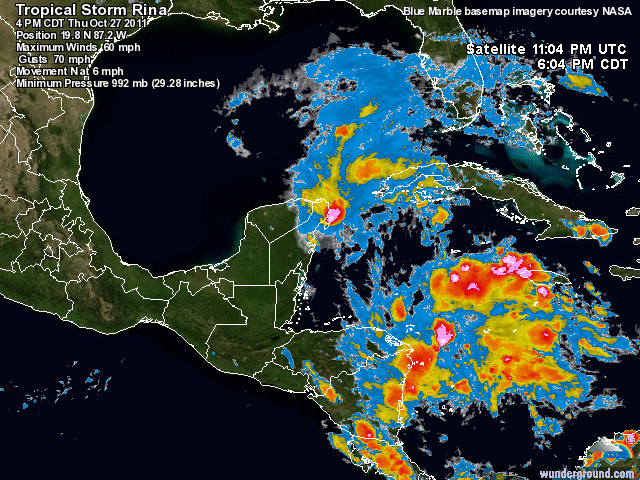 Rina remains still poses dangers as it encounters the Yucatan Peninsula through tonight. Rina was on the verge of becoming a major hurricane (Category 3 strength or greater) Wednesday morning, but has since dramatically weakened due to upwelling (rough seas bringing up colder water from the depths) and disruptive wind shear (strong winds high in the atmosphere).

Rina was downgraded to a tropical storm this morning. Despite losing strength, Rina should not be taken lightly according to the AccuWeather.com Hurricane Center.

Torrential rain and a storm surge remain dangers to Mexico’s state of Quintana Roo on the Yucatan Peninsula, including the popular resort cities of Cancun and Cozumel. Squalls will increase across eastern Quintana Roo into tonight as Rina approaches then moves along the Quintana Roo coast.

The immediate coastline along and east of where Rina moves inland, which includes Cozumel Island, will be pounded with rough surf and a flooding storm surge of 1 to 3 feet above normal tide levels.

Rina is a relatively small system with its tropical storm-force winds extending only a few dozen miles away from its center. However, clusters of thunderstorms rotating about the center can bring gusty winds to inland areas of the Yucatan Peninsula and western Cuba. These winds are still capable of causing power outages, as well as tree and property damage across eastern Quintana Roo.

Localized areas of northeastern Quintana Roo will be hit by more than 4 inches of rain. After Rina emerges back over water on Friday, the cold front bringing a dramatic drop in temperatures to Texas today will protect the United States from a direct hit. Tropical moisture, however, could still get pulled northward and lead to vacation-ruining downpours across South Florida and the Keys this weekend.

The front will also act to push Rina back to the south into either western Cuba or the northwestern Caribbean.