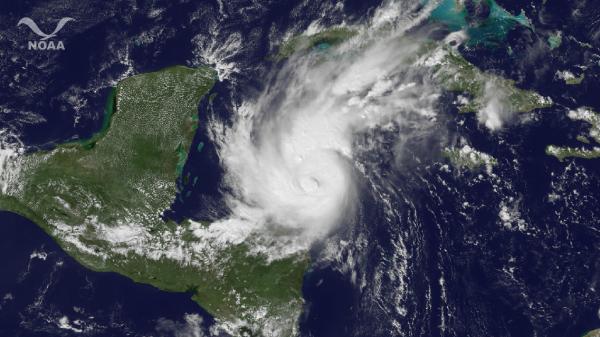 Hurricane Rina is on a collision course with Mexico’s Yucatan Peninsula by tomorrow, but its prospects to remain organize after tomorrow seem bleak. Latest wind data taken from Rina indicates that the storm has weakened to a Category 1 hurricane with winds of 85 mph.

The outer rain bands of Rina will hit the eastern shores of the Yucatan Peninsula this afternoon, while winds will increase to tropical storm-force tonight. Thursday is when the worst of Rina will pound the Mexican states of Quintana Roo and eastern Yucatan.

Cities in Rina’s direct path, including the popular resort cities of Cozumel and Cancun, are bracing for strong winds capable of causing tree and window damage and lengthy power outages.

However, Rina could dissipate quickly after passing the Yucatan Peninsula Friday. In fact, Rina may dissolve into a Tropical Rainstorms over eastern Cuba for the latter half of this weekend. Although a significant impact on southern Florida appears unlikely at this point, all residents and visitors across the Florida Peninsula should check back with the AccuWeather.com Hurricane Center to monitor the latest on Rina.

The immediate coastline also faces flooding from pounding surf, especially along and to the north of where Rina comes onshore.

External cameras on the ISS captured these views as the station flew 248 miles over the Caribbean Sea east of Belize.

Rina’s maximum sustained winds remained steady at about 110 mph early Wednesday, said the U.S. National Hurricane Center in Miami, making it a Category 2 storm. Forecasters predict it will strengthen to a major hurricane as it nears the Mexican coast Wednesday night before rolling over the island of Cozumel, then along the coast to Cancun.

The late season hurricane, which continues to intensify, was located 300 miles east-southeast of Chetumal, Mexico, barely moving west-northwest at a glacial three miles an hour. Hurricane warnings have been issued for the Yucatan from north of Punta Gruesa, Mexico, to Cancun.

Gales, high waves, slashing rain and even snow have hammered Newfoundland on Tuesday night and Wednesday as a severe Atlantic storm wound up nearby. Winds have reached 50 mph in St. John’s, nearly 70 mph at Cape Race and about hurricane strength on an oil production platform east of Newfoundland.

Cold, windswept rain has amounted to 1-2 inches in many areas by Wednesday afternoon. Early in the day, snow even fell for at time inland, with at least 2 inches covering Gander before giving way to rain.

An indicator of how strong this storm has become was that of atmospheric pressure. By 11 a.m., Eastern Time, sea level pressure at Cape Race was 965.8 mb, or 28.52 inches of mercury, and still falling. At the same time, the central pressure of Category 2 (almost Category 3) Hurricane Rina was 967 mb, or 29.56 inches, before subsequently weakening significantly.

The storm will continue lashing the island of Newfoundland Wednesday night before pulling out to sea on Thursday, allowing weather to improve. (AccuWeather)