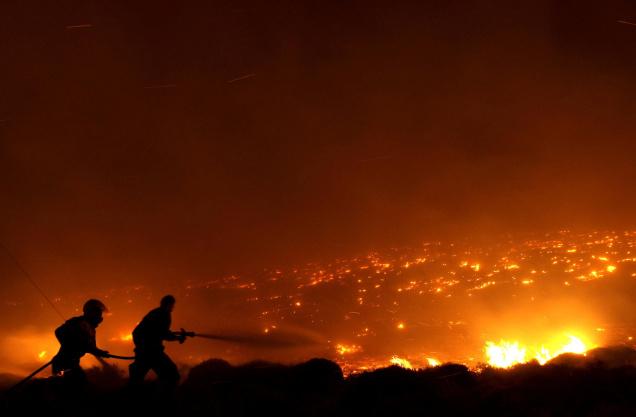 A fire on the picturesque Ionian island of Corfu has devastated some 130 hectares (320 acres) of pine forest and olive groves, the island’s mayor said on Thursday, blaming arsonists. Pockets of fire that started in 19 different locations on Tuesday left no doubt that arsonists were at work.

The blaze raced across a 40-kilometre (25 miles) front in the island’s northeast on Tuesday night, nearing inhabited areas but without threatening the island’s extensive tourist resorts. The fire department on Thursday said most of the fronts had been checked with the assistance of water bombers and a helicopter. Scores of fires break out in Greece every summer, aided by high temperatures and strong winds and frequently attributed to arson, though the perpetrators are rarely caught.

In 2007, a wave of wildfires killed 77 people and destroyed over 250,000 hectares of land, mainly in the Peloponnese and the island of Evia.

In 2009, hundreds of people were evacuated near Athens owing to another wildfire in the capital’s eastern suburbs. (TerraDaily) 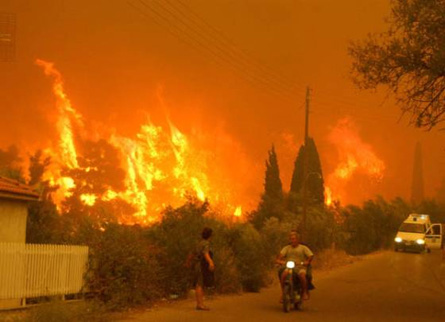 A wildfire that broke out  in the Loutses region on the Ionian island of Corfu was described as being “partially under control” by fire brigade officers on Saturday. Forces were still on the scene to fully extinguish the blaze.  Also burning fiercely was a forest fire that broke out at the location Agia Paraskevi in Gymnopotamos, Filippiada. A force of 20 firemen, seven vehicles, a team on foot and two water-bombing aircraft were battling to control the flames.
A fire in Nikiti in the Halkidiki peninsula was still burning, with thick smoke hampering the continuing fire-fighting effort, though the fire on the Aegean island of Skopelos appeared to be abating and fire fighters were confident it would soon be under control.
The fires in Halkidiki and Skopelos were both started by lightning strikes. (AthensNews)