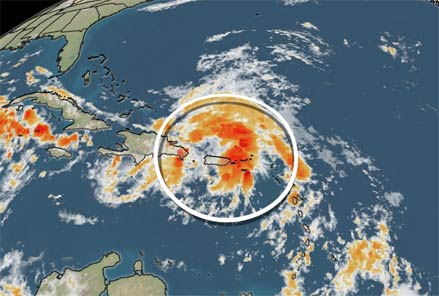 These downpours alone could lead to flash flooding in urban areas and along small streams, but recent rain has made the islands are more susceptible to flooding problems. Heavy rain in Puerto Rico on Friday caused a wall to collapse in the western city of San German. Downpours triggering mudslides is another danger across Puerto Rico due to its higher terrain. Despite the threat of flooding, the unsettled weather will have long-term benefits.

Many places across Puerto Rico are experiencing rainfall shortages so far this year, which will get eased by the upcoming showers and thunderstorms. The year’s rainfall total (through May 13) stands at 11.51 inches in San Juan, below the 13.43 inches that typically falls.

The western Puerto Rico city of Mayaguez has only received 31 percent of the rain that normally falls since the start of the year. Through Tuesday, the numerous shower and thunderstorm activity will likely bypass Hispaniola (the island that is home to Haiti and the Dominican Republic).

That may change during the middle of next week if the stream of tropical moisture shifts westward in response to the storm that will slowly depart the East Coast of the United States. (AccuWeather)