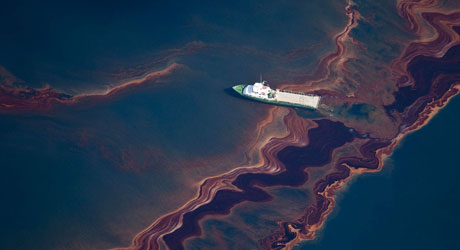 It’s been called the worst environmental disaster in U.S. history, and rightfully so, if for no other reason than because, one year later, the BP oil spill in the Gulf of Mexico is like the nightmare gift that keeps on giving, some experts are saying.

The Deepwater Horizon exploration platform, which was drilling in the BP-operated Macando Prospect 40-odd miles off the coast of Louisiana, exploded in a ball of flame April 20, 2010. The explosion killed 11 people, injured 17 others and fractured the extraction pipe, gushing an estimated 200 million gallons of oil over the next 95 days in a region that has been called one of the most important ecosystems in all of North America. The well was finally capped on July 17. The relief well process was completed on Sept. 19, and the federa lgovernment officially declared the well “dead.”

The spill caused an immediate impact on Gulf-related industry, as well as leveling severe damage to marine and wildlife habitats all up down the Gulf Coast. The spill impacted as much as 320 miles of Louisiana coastline at its peak. After being closed throughout much of the summer, the shrimping industry was suspended once again in November in about 4,200 square miles of Gulf when tar balls were discovered in shrimp nets.

In January Frances Beinecke, appointed to a special commission to examine the causes of the disaster and make recommendations to prevent future accidents, said “tar balls were continuing to wash up on shore, and that oil sheen trails were being seen in the wake of fishing boats. Wetlands and marshlands were still in decline and dying; crude oil lay offshore in deepwater, as well as fine silts and sands onshore.”

Though skimmer ships, floating containment booms, dispersants and other measures were employed to sop up the oil and prevent the bulk of it from reaching shore, oil still found its way there, and in great amounts. More of it, in fact, that manyexpertsbelieve BP was willing to admit.

The Obama administration pointed the finger of blame squarely at BP, even holding the oil giant responsible for picking up the tab for deploying the National Guard in support of recovery efforts. The company, for its part, set up a $20 billion compensation fund, having approved more than 300,000 claims and paying out $3.8 billion by the spill’s anniversary date. But the jury is still out on the spill’s final costs and damage estimates.

In all, according to RestoreTheGulf.gov, a Web site established by the government to track progress in cleaning up the spill, 800,000-plus barrels of oily water were recovered and nearly 1.8 million gallons if dispersant was deployed in an attempt to clear the Gulf.

How have the efforts faired? You will get different responses to that question.

On the one hand, one report said this week, there are some good signs. Scientists found thriving schools of fish when they attempted late last year to gauge the effects of the spill.

“Trawling surveys done in the fall of 2010 caught triple the number of marine creatures as prior years,” said a report in Canada’s Globe and Mail newspaper. “With no one netting them, it seemed, the fish were surging.”

But that bit of good news comes with caveats. For example, Blair Mase, a National Oceanic and Atmospheric Administration marine mammal stranding coordinator, says deaths of dolphins in the region this year is exceptionally high, and that the spill could be playing a major role.

“We’re trying to determine what’s causing this. It could be infectious related. Or it could be non-infection,” she said, noting that her agency was examining a number of causes, including the spill, infectious disease and biotoxins.

In addition, some of the region’s best sporting fish and species of seafood are turning up with heinous-looking, uncharacteristic lesions.

Perhaps more telling, scientists say there is a hefty amount of oil left – perhaps even more than what spilled during the Exxon-Valdez disaster off the coast of Alaska in 1989 (about 257,000 barrels of oil).

There are also reports that the spill is having effects on Gulf Coast residents as well. Darryl Malek-Wiley, environmental justice organizer with Sierra Club, said in an interview this week that the combination of oil and the dispersants used to clean it up are taking their toll.

“Some of the people who are sick, they’re taking samples of their blood and they’re finding the chemicals that make up the dispersants in their blood, as well as Louisiana sweet crude, and having serious health impacts,” he said. “Loss of memory, rashes, sinus. Some folks we’ve talked with, they forget where they’re going. They forget who you are. And these are men, all of them were fishermen in relatively good physical shape.”

As for the seafood industry, the government says its tests have not turned up any safety concerns, noting that samples of swordfish, tuna and other fin fish have found “no detectable oil or dispersant odors or flavors,” according to the Globe and Mail. But perhaps more telling is that a number of experts don’t believe the spill has led to any meaningful reform.

“The BP oil spill is, potentially, a ‘cultural anomaly’ for institutional changes in environmental management and fossil fuel production,” a study by P. Devereaux Jennings of the Alberta university and Andrew Hoffman of the University of Michigan concluded. They added that a “true change in our approach to handling issues related to oil drilling, oil consumption and environmental management have yet to occur.”

Adds Beinecke: “Today Americans have the right to ask: are we any safer than we were last April? At the broadest level, the answer is no.”