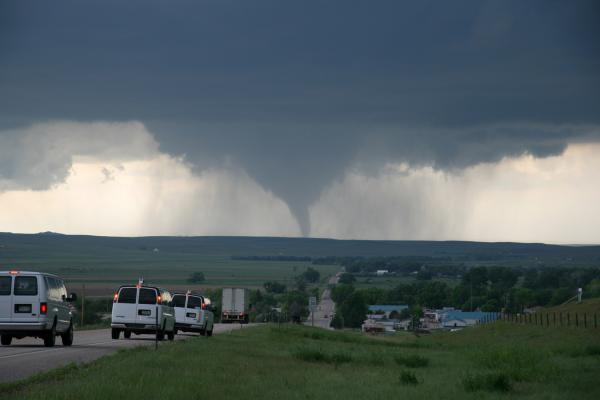 A deadly three-day storm spawned a reported 267 tornadoes over the weekend, according to the Storm Prediction Center in Norman, Okla. But not all of these were single funnel clouds — some were what you might call tornado twins and triplets.

Storm chasers following the course of the raging storm captured spectacular footage of a phenomenon called a multivortex tornado as the storm barreled through Oklahoma. In these twisters, multiple funnel clouds rotate around each other in a single storm.

The multivortex twister — one of five confirmed tornadoes that hit Oklahoma on April 14 — was the largest, an EF-3 tornado on the Enhanced-Fujita tornado damage scale. It had winds of up to 165 mph (266 kph) and killed two people near the towns of Tushka and Atoka.

Oklahoma is in the heart of Tornado Alley, where textbook tornadoes form when warm, moist Gulf of Mexico air collides with cool, northern air, creating massive storms. The warm air rises and hits wind shear, a layer of the atmosphere where the winds change direction over a short height and create rotation — think of a pinwheel with air pushing in opposite directions on the top and bottom.

Below the pinwheel, a cap of warm air bottles up surface heat below about 10,000 feet (3,000 meters). Heat builds until it punches through the cap, triggering a thunderstorm. With enough air shooting up and down, the pinwheel is knocked on its side, creating a huge rotating mass of clouds called a mesocyclone — the hallmark of a tornado-spawning supercell storm.

A multiple vortex tornado is a different beast, packing several vortices inside the main vortex.

“It’s almost like you have that circulation, and then if conditions are right you have circulation embedded within circulation,” said Karl Jungbluth, a meteorologist with the National Weather Service in Des Moines, Iowa. Jungbluth was on a storm survey team that investigated a similar multivortex tornado in Iowa earlier this month.

These extra funnels usually come in groups of two to five and last only a few minutes. Multiple funnel clouds are usually visible only early in a storm before they break off into tornadoes of their own. A storm’s circulations can only live up to a certain size and intensity, then it splits into two, three or four tornadoes, meteorologist Mike Smith, chief executive officer of Weather Data Services, a part of AccuWeather, told OurAmazingPlanet.

Storm survey teams are studying Oklahoma’s tornadoes’ paths of destruction, looking at the debris from destroyed houses — and comparing these clues with radar images of the storm to figure out exactly how many tornadoes formed. (OurAmazingPlanet)

The average tornado warning sounds 13 minutes before touchdown. The warning time is so short that residents of towns in Tornado Alley are told not to flee their homes when they hear a siren. That would be too dangerous, especially during a tornado that strikes in the dead of night. Hunker down and hope for the best, people are often told.

Tornado warnings are so short because tornadoes are almost impossible to forecast until it’s too late. Unlike hurricane season, there is no forecast for tornado season — and no straightforward climate change link. But the same atmospheric players that fueled this year’s wild winter of bitter cold and tremendous snowfalls could create dangerous tornadoes this spring and summer, scientists said, which could cast light on the limits of tornado prediction.

Beginning this year, a major upgrade to the nation’s radar system could help with tornado spotting, which isn’t easy to do, as evidenced by the 75-percent false alarm rate for tornado warnings. Last year saw 1,280 tornadoes, about what is expected for a given year in the United States. The early storms are tied to an unusually prolonged Arctic outbreak.

Tornado season typically starts in March and hits its stride from May to June, though it’s possible for tornadoes to pop up during any time of the year (November is often called the second tornado season). During the spring and early summer, thousands of tornadoes will strike the United States. And tornadoes can strike anywhere at any time, day or night — a tornado hit New York City at night in September last year.

Most of the biggest and baddest tornadoes spin off supercell storms, which are up to 50,000 feet (15,000 meters) tall and can last for hours. Supercells need three main ingredients to form: energy, rotation and a cap. The United States has plenty of all three and once they mix, a supercell storm can spit out a tornado in minutes.

The energy comes from the collision of warm, moist air from the Gulf of Mexico and the cool, dry Arctic air. The warm air rises and hits wind shear, a layer of the atmosphere where the winds change direction over a short height, and creates the rotation — think of a pinwheel with air pushing in opposite directions on the top and bottom. Below the pinwheel, a cap of warm air bottles up surface heat below about 10,000 feet (3,000 m).

Heat builds until it punches through the cap, triggering a thunderstorm. With enough air shooting up and down, the pinwheel is knocked on its side, creating a huge rotating mass of clouds called a mesocyclone — the hallmark of a tornado-spawning supercell storm. But there are a number of flies in the tornado-generating ointment and because of that, a tornado is actually a rare event.

Only a fraction of supercell storms create tornadoes, and meteorologists are not exactly sure why. Meteorologists can’t even say when during a supercell’s lifetime a tornado will form. This is not what the good folks in Tornado Alley want to hear.

Most of the Earth’s tornadoes touch down in the hotbed known as Tornado Alley, bordered by the Dakotas to the north, the Gulf Coast to the south, the Rocky Mountains to the west and the Appalachian Mountains to the east. Tornadoes are so common here that tour guides often charge thousands of dollars to lead groups on weeklong tornado-watching tours.

Southeast of Tornado Alley is Dixie Alley, home to the deadliest tornadoes. Dixie Alley spreads from the Lower Mississippi Valley to the Upper Tennessee Valley, including Arkansas, Mississippi, Louisiana, Alabama, Georgia and the Florida panhandle.

Dixie Alley is where storm assessment teams are sifting through most of the damage from the late February tornadoes, which had estimated strengths up to EF3.

A tornado’s strength is based on the amount of damage it causes. The Enhanced Fujita tornado damage scale runs from 0 (minor damage) to 5 (a storm that is powerful enough to destroy a house).

Tornadoes are also rated based on their wind speeds. An average tornado has maximum wind speeds of about 112 mph (180 kph) or less, measures around 250 feet (76 m) in width and travels approximately one mile before unraveling. Some chart toppers have had 300 mph (480 kph) winds — almost twice that of 1992’s devastating Hurricane Andrew. The hurricane was a Category 5 storm, the highest hurricane rating.

The problem with how scientists count and rank tornadoes is that someone has to see it or it has to hit something. The biggest tornado of all time could have roared through an open field and no one would have known it.