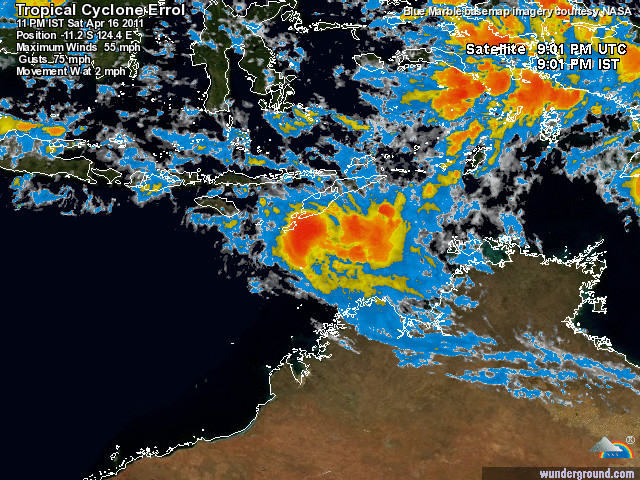 Tropical Cyclone Errol formed off the northern coast of Western Australia Friday and gained strength throughout the day Sunday. It will have maximum sustained winds near 75 mph when it affects Indonesia. Errol is expected to cause strong winds and heavy rain over the West Timor and Rote areas of Indonesia during tonight and on Sunday. These islands are located in southern Indonesia, around 350 miles north of the coast of Western Australia.

It is expected to make landfall near the small Island of Pulau Roti. The largest city to be affected will be Kupang. However, the worst effects should stay south of the city of more than 300,000. The cyclone will move very near Pulau Sawu and southern parts of Sumba during the day Sunday. It is small and compact, so there will not be a wide area affected by the cyclone. The cyclone is then expected to dissipate over the Open Indian Ocean south of Java early next week. 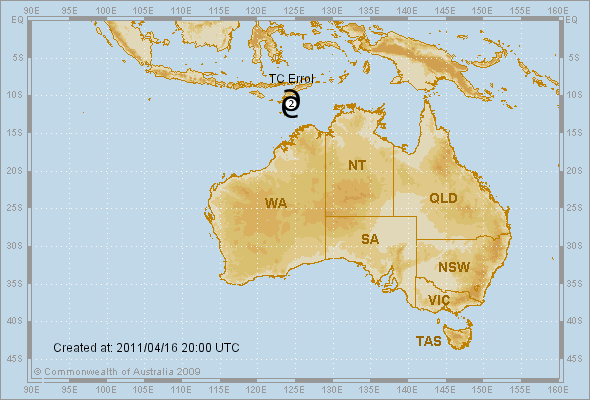 Tropical Cyclone Errol continues to move towards the northwest away from the north Kimberley coast. The cyclone is not expected to affect the WA coast in the next 48 hours. Errol is expected to cause GALES and heavy rain over the West Timor and Rote areas of Indonesia during tonight and on Sunday. Future information for this system will be provided by Jakarta Tropical Cyclone Warning Centre, available at

FESA-State Emergency Service advises that there are no community alerts at present.

Jakarta COASTAL WATERS EARLY WARNING FOR COASTAL WATERS AND AROUND KUPANG ROTE ISLAND Issued by JAKARTA TROPICAL Cyclone WARNING CENTRE At: 03:01 AM 17/04/2011 to look out for gusty speed can reach 40 percent stronger than the average mentioned below, and the maximum wave height can reach twice as high.

NOTE: The latitude and longitude expressed in decimal degrees.

SITUATION at 1:00 pm: Tropical Cyclone Errol located on 30 miles of 11.1 S 124.4 E about 70 miles southeast of Kupang and 75 miles east southeast of Rote with pressure at its center reaches 991 hektopaskal were moving towards the northwest with a speed of 2 knots. Breezy

EARLY WARNING: For the coastal waters between the island of Savu and Rote Island Winds 20/30 knots. Squalls reaching 45 knots. Increase in wave height can occur within 12-24 hours. 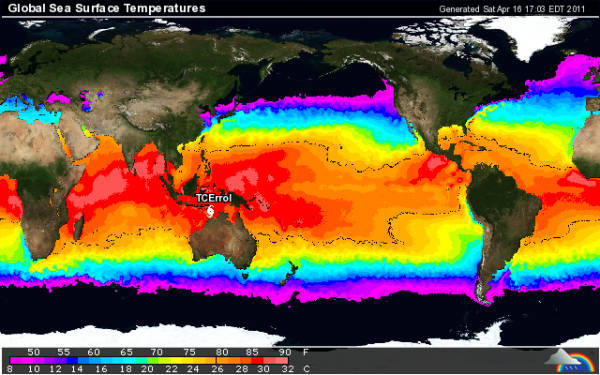