There was new update about comet Elenin posted today on Laura Knight-Jadczyk blog, reported on SoTT.

There is NOT going to be a pole shift in the next week or so as certain raving nutzoids have been spamming all over the net. Also, Comet Elenin is NOT going to hit Earth (which is not to say that other things won't at some point in space and time). However, there are a few things about this comet that are extremely interesting in view of the plasma comet theory of James McCanney. Again, I suggest that readers get a copy of this book and get up to speed on this theory and how comets can affect our entire solar system electromagnetically, and how that can dramatically affect our sun and therefore planet Earth. There is an increasing body of evidence that electromagnetic disturbance of our Sun is directly related to earthquakes, volcanism, and weather on our planet.

So, with that in mind, let's have a look at some new predictions for what relationships the planets of our solar system might form with the incoming body. Our astronomer friend - who wishes to remain anonymous for the present, but I can tell you that he works at a large observatory - has run the algorithm with the latest orbital elements available on Elenin. Here is the animation.


On the animation, there are two dots to represent Elenin's position; one is from the February 4th elliptical orbital elements and the other is from the February 23rd elements. This is just to test the convergence of the calculations. The perihelion date is September 10th. 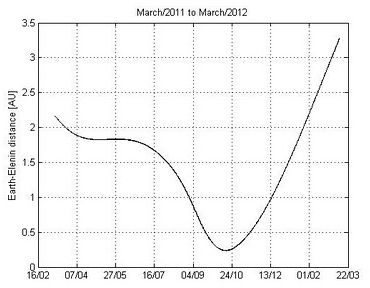 Now, assuming that there are no errors and no dramatic changes to the orbit of Elenin, we find that the minimum distance (the closest Elenin will come to Earth) is 0.235 AU. (In other words, over 35 million kilometers distant - not likely to be much in the way of potential impact there!)

Referring back to the theories of Jim McCanney, there are three notable alignments between Elenin and Earth and some other body of the solar system in relation to the Sun.

On March 15th, there will be a Sun-Earth-Elenin Alignment. I guess we can look for some EM activity following that. Storms, earthquakes, volcanic eruptions, perhaps even a little thinning of the veil?

On September 27th, there will be another Sun-Earth-Elenin alignment. There will also be a new moon at this time (rather close) and this might produce more dramatic EM action on the planet. If you check the angles plotted on the graph below, you'll see that this alignment is actually very interesting because Mercury also lines up on the opposite side of the Sun. So it is really a Mercury-Sun-Elenin-Moon-Earth alignment.

On November 23rd, another Sun-Earth-Elenin alignment. The new moon of November comes two days later on the 25th, so that might be "close enough for horseshoes" in the case of EM action.  If there are going to be any discharge related events as described in McCanney's theory, these dates may be important. http://www.sott.net/articles/show/225704-Comet-Elenin-Update (SoTT) 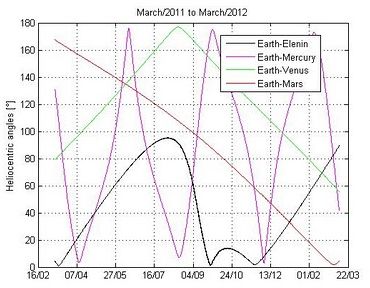 Parts of the south and southeast Australia are in the grip of severe to extreme heatwave, with temperatures soaring into the mid-40s °C (104s °F) and total fire bans in place in South Australia, New South Wales, and Victoria. The extreme weather conditions...

Heavy rains have fallen over the past few days in Kuwait, resulting in flooded roads, schools, homes, and hospitals. Al Sabriya received the highest amount of rain -- around 134 mm (5.2 inches) or about six times the average rain for the month of November. Heavy...

Explosive activity continues at the Indonesian Lewotolo volcano on Monday, November 30, 2020, after a major eruption on Sunday sent ash up to 15.2 km (50 000 feet) a.s.l. The Aviation Color Code was raised to Red following the eruption and Alert Status raised to 3...