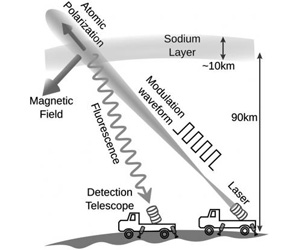 The method involves exciting sodium atoms in a layer 90 kilometers above the surface and measuring the light they give off.

“Normally, the laser makes the sodium atom fluoresce,” said Dmitry Budker, UC Berkeley professor of physics. “But if you modulate the laser light, when the modulation frequency matches the spin precession of the sodium atoms, the brightness of the spot changes.”

Because the local magnetic field determines the frequency at which the atoms precess, this allows someone with a ground-based laser to map the magnetic field anywhere on Earth.

Budker and three current and former members of his laboratory, as well as colleagues with the European Southern Observatory (ESO), lay out their technique in a paper appearing online this week in the journal Proceedings of the National Academy of Sciences.

Ground-based measurements, however, can avoid several problems associated with satellites, Budker said. Because these spacecraft are moving at high speed, it’s not always possible to tell whether a fluctuation in the magnetic field strength is real or a result of the spacecraft having moved to a new location. Also, metal and electronic instruments aboard the craft can affect magnetic field measurements.

“A ground-based remote sensing system allows you to measure when and where you want and avoids problems of spatial and temporal dependence caused by satellite movement,” he said. “Initially, this is going to be competitive with the best satellite measurements, but it could be improved drastically.”

Laser guide stars
The idea was sparked by a discussion Budker had with a colleague about of the lasers used by many modern telescopes to remove the twinkle from stars caused by atmospheric disturbance. That technique, called laser guide star adaptive optics, employs lasers to excite sodium atoms deposited in the upper atmosphere by meteorites. Once excited, the atoms fluoresce, emitting light that mimics a real star. Telescopes with such a laser guide star, including the Very Large Telescope in Chile and the Keck telescopes in Hawaii, adjust their “rubber mirrors” to cancel the laser guide star’s jiggle, and thus remove the jiggle for all nearby stars.

It is well known that these sodium atoms are affected by the Earth’s magnetic field. Budker, who specializes in extremely precise magnetic-field measurements, realized that you could easily determine the local magnetic field by exciting the atoms with a pulsed or modulated laser of the type used in guide stars.

The method is based on the fact that the electron spin of each sodium atom precesses like a top in the presence of a magnetic field. Hitting the atom with light pulses at just the right frequency will cause the electrons to flip, affecting the way the atoms interact with light.

“It suddenly struck me that what we do in my lab with atomic magnetometers we can do with atoms freely floating in the sky,” he said.

Budker’s former post-doctoral fellow James Higbie now an assistant professor of physics and astronomy at Bucknell University – conducted laboratory measurements and computer simulations confirming that the effects of a modulated laser could be detected from the ground by a small telescope. He was assisted by Simon M. Rochester, who received his Ph.D. in physics from UC Berkeley last year, and current post-doctoral fellow Brian Patton. 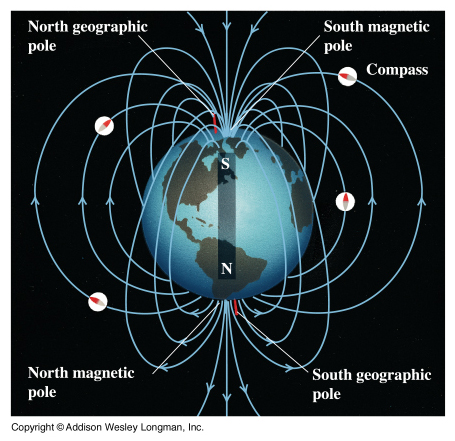 Portable laser magnetometers
In practice, a 20- to 50-watt laser small enough to load on a truck or boat tuned to the orange sodium line (589 nanometer wavelength) would shine polarized light into the 10 kilometer-thick sodium layer in the mesosphere, which is about 90 kilometers overhead. The frequency with which the laser light is modulated or pulsed would be shifted slightly around this wavelength to stimulate a spin flip.

The decrease or increase in brightness when the modulation is tuned to a “sweet spot” determined by the magnitude of the magnetic field could be as much as 10 percent of the typical fluorescence, Budker said. The spot itself would be too faint to see with the naked eye, but the brightness change could easily be measured by a small telescope.

“This is such a simple idea, I thought somebody must have thought of it before,” Budker said.

He was right. William Happer, a physicist who pioneered spin-polarized spectroscopy and the sodium laser guide stars, had thought of the idea, but had never published it.

“I was very, very happy to hear that, because I felt there may be a flaw in the idea, or that it had already been published,” Budker said.

While Budker’s lab continues its studies of how spin-polarized sodium atoms emit and absorb light, Budker’s co-authors Ronald Holzlohner and Domenico Bonaccini Calia of the ESO in Garching, Germany, are building a 20-watt modulated laser for the Very Large Array in Chile that can be used to test the theory. (TerraDaily)