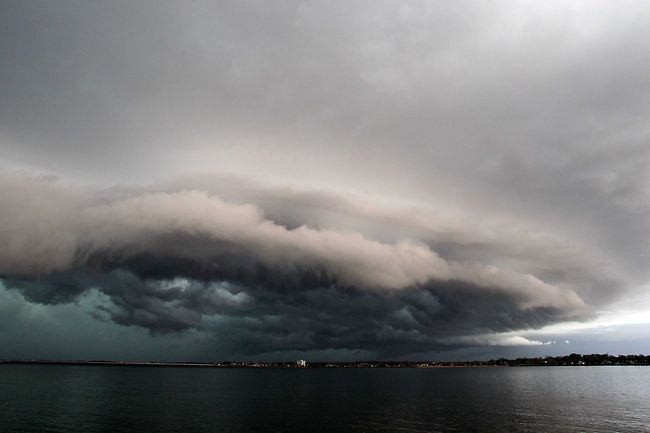 The Bureau of Meteorology had been warning of a severe storm all day, so flood-weary residents were not caught off guard when dark clouds descended mid-afternoon. The bureau's latest advice is available online.

Thousands of lightning strikes have been detected and the weather bureau recorded heavy rain at Wacol, south-west of Brisbane, where 98mm fell in an hour and 70mm in 30 minutes. In the city's north, 70mm of rain was recorded in an hour at Mitchelton. The weather bureau says the immediate threat of severe storms has passed, but the situation will be monitored and further warnings will be issued if necessary. It says the first line of storms rolled in this afternoon with ominous clouds, hail and spectacular lightning shows. Emergency services say they have only had a dozen calls for help from people with minor roof damage.

"We had a pretty strong gust there of up to 80 kilometres per hour, so there is still a few more thunderstorms to come through in the next few hours," bureau spokesman Rick Threlfall said.

The bureau's radar showed the storms moving from the west toward the Gold Coast. Energex reported most power outages in the Lockyer Valley, one of the worst-affected areas of January's flash floods. Almost 4,000 properties there were blacked out at 4.30pm. Energex said lightning was the main cause of power interruptions, with more than 27,000 lightning strikes recorded between midday and 7pm yesterday. The storm came after three days of above-average heat in the south-east. Further west, lightning strikes started multiple grass fires.

Tropical Cyclone Carlos is expected to continue moving in a general west southwest track during Tuesday, close to the Pilbara coast. Gales with wind gusts to 100 kilometres per hour are being experienced in coastal areas from just east of Port Hedland to near Karratha, and will extend west towards Exmouth later on Tuesday and Coral Bay early on Wednesday morning. There is the risk of destructive winds with gusts exceeding 125 kilometres between Whim Creek and Dampier on Tuesday morning, extending further west towards Onslow during Tuesday afternoon, possibly reaching Exmouth early Wednesday morning. Residents of Pilbara coastal towns are warned that tides may rise significantly above the high water mark as the cyclone moves down the coast, even if it doesn't cross the coast. damaging waves and flooding of low lying coastal areas are possible particularly on Tuesday's high tide in the Karratha region. Heavy rain is expected to cause significant stream rises with possible localised flooding for Pilbara coastal streams during Tuesday. Most of the rainfall is to the west of the cyclone, so rainfall is expected to ease soon after the cyclone passes.