For several years now, scientists have been puzzled as to why the Earth's north magnetic pole has been moving rapidly from the Canadian Arctic towards Siberia. After studying 20 years of satellite data, researchers from the University of Leeds in the UK and the Technical University of Denmark found that the pole's wandering may be due to a monolithic competition between two lobes of differing magnetic force near the core. A range of simple models that capture this process indicate that over the next decade the north magnetic pole will continue on its current trajectory, traveling a further 390 – 660 km (240 – 410 miles) towards Siberia.

Magnetic north wanders, unlike the geographic north pole, which is in a fixed location. This has been known since 1831 when it was first measured, and subsequently mapped slowly moving from the Canadian Arctic towards Siberia.

The rapid change in pace is a concern for navigation systems that rely on pinpoint calculations of the pole's location. This prompted the US National Geophysical Data Center to fast track its frequent updates to the World Magnetic Model in 2019.

Scientists have been looking for a solid idea of the physical mechanisms behind the displacement which allows for accurate predictions on the planet's magnetic movements.

Researchers and Earth scientists Philip Livermore and Matthew Bayliff from the University of Leeds, along with Christopher Finlay from the Technical University of Denmark, analyzed 20 years of geomagnetic data from the ESA's Swarm mission.

The researchers reported that these satellite data showed that the position of the north magnetic pole is generated by liquid iron inside the Earth in the outer core, and changes in that swirling iron can alter the location of the magnetic north.

The pole's heading lines up with two anomalies called negative magnetic fluxes– one beneath Canada and another below Siberia.

"By analyzing magnetic field maps and how they change over time, we can now pinpoint that a change in the circulation pattern of flow underneath Canada has caused a patch of the magnetic field at the edge of the core, deep within the Earth, to be stretched out," said Livermore.

"This has weakened the Canadian patch and resulted in the pole shifting towards Siberia." 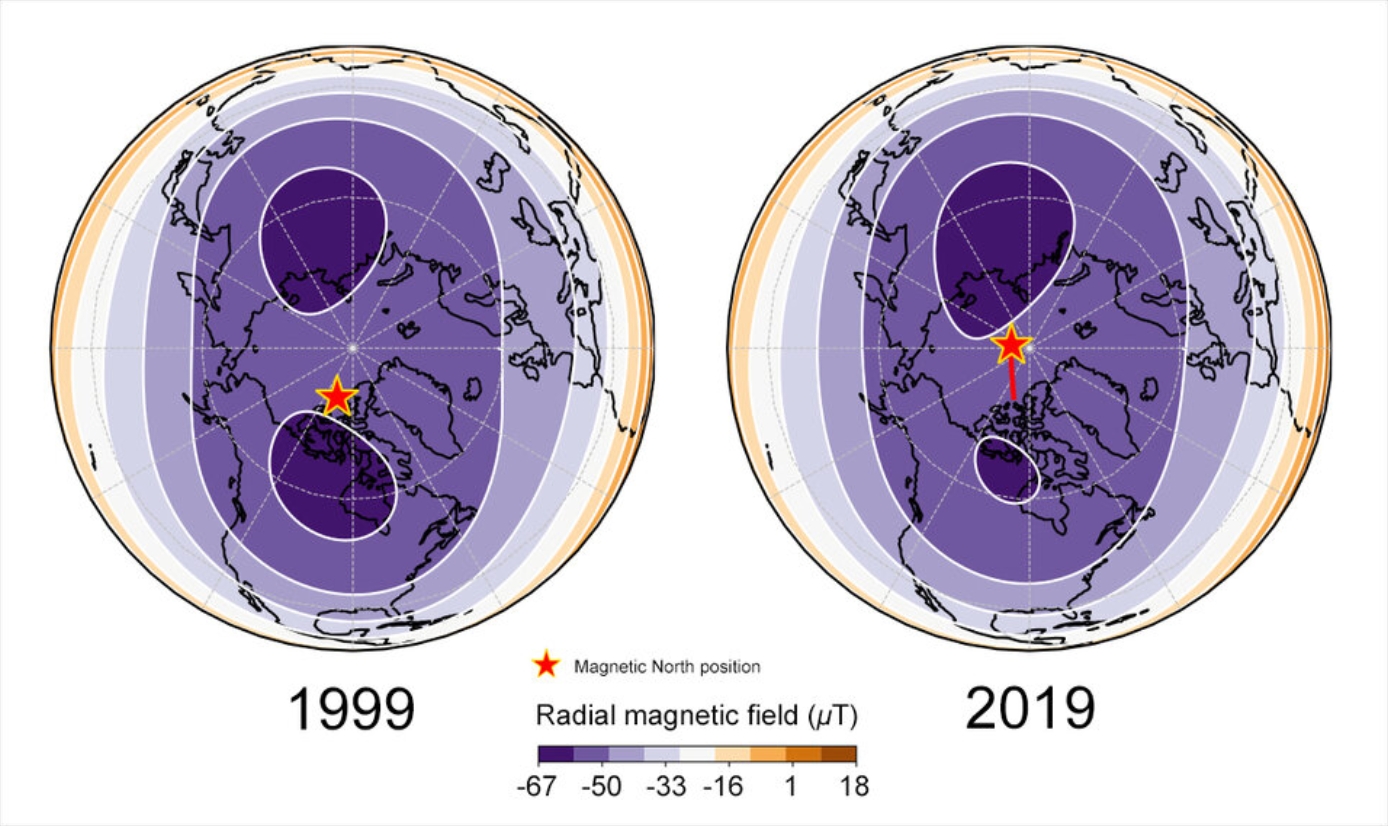 "However, given that the pole’s position is governed by this delicate balance between the Canadian and Siberian patch, it would take only a small adjustment of the field within the core to send the pole back to Canada." 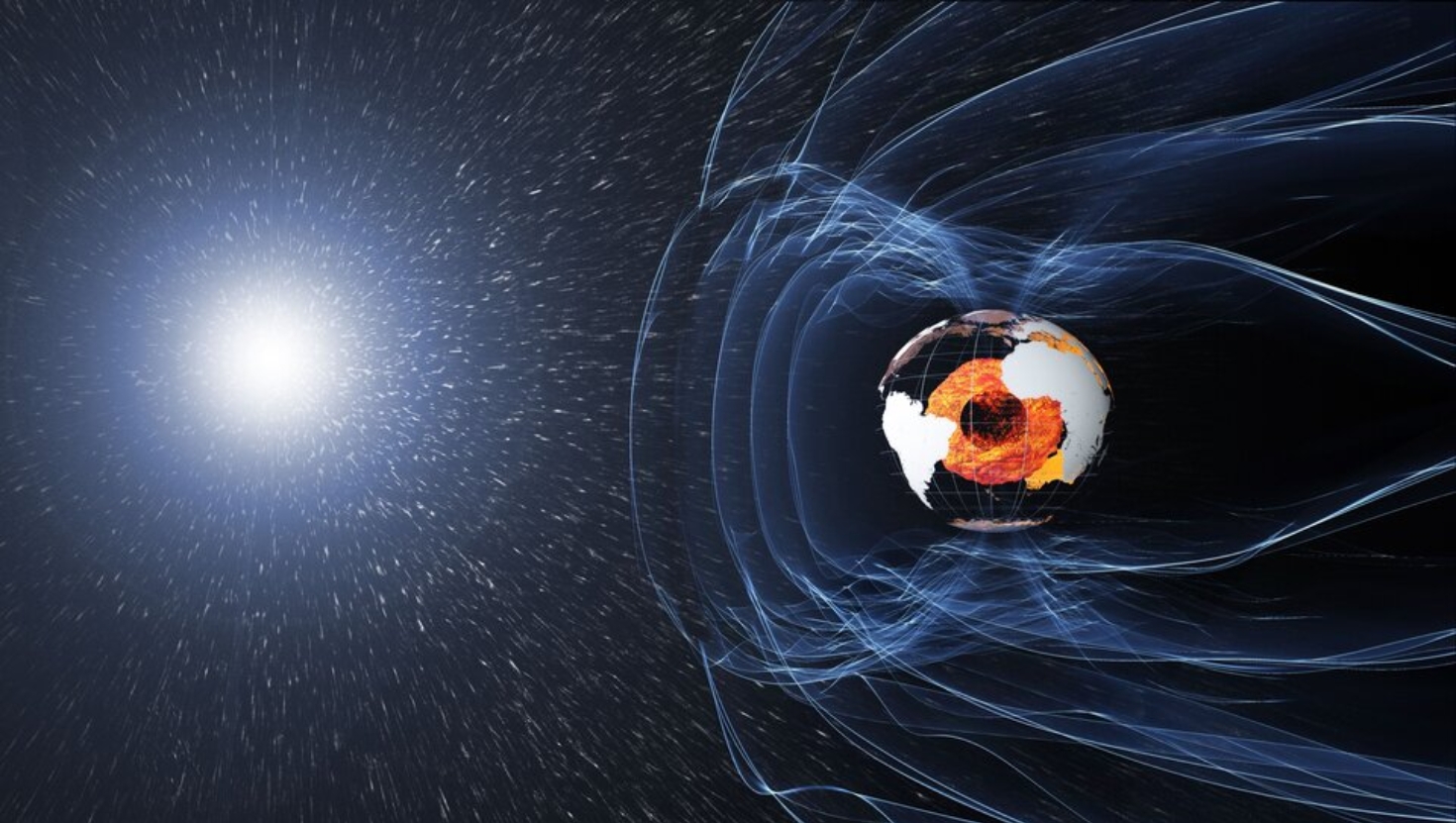 The wandering of Earth’s north magnetic pole, the location where the magnetic field points vertically downwards, has long been a topic of scientific fascination. Since the first in situ measurements in 1831 of its location in the Canadian arctic, the pole has drifted inexorably towards Siberia, accelerating between 1990 and 2005 from its historic speed of 0–15 km yr−1 to its present speed of 50–60 km yr−1. In late October 2017 the north magnetic pole crossed the international date line, passing within 390 km of the geographic pole, and is now moving southwards. Here we show that over the last two decades the position of the north magnetic pole has been largely determined by two large-scale lobes of negative magnetic flux on the core–mantle boundary under Canada and Siberia. Localized modeling shows that elongation of the Canadian lobe, probably caused by an alteration in the pattern of core flow between 1970 and 1999, substantially weakened its signature on Earth’s surface, causing the pole to accelerate towards Siberia. A range of simple models that capture this process indicate that over the next decade the north magnetic pole will continue on its current trajectory, traveling a further 390–660 km towards Siberia.

Over the past 200 years, Earth's magnetic field has lost around 9% of its strength. Meanwhile, a large region of reduced magnetic intensity has developed between Africa and South America — known as South Atlantic Anomaly. Over the past 5 years, however, a…