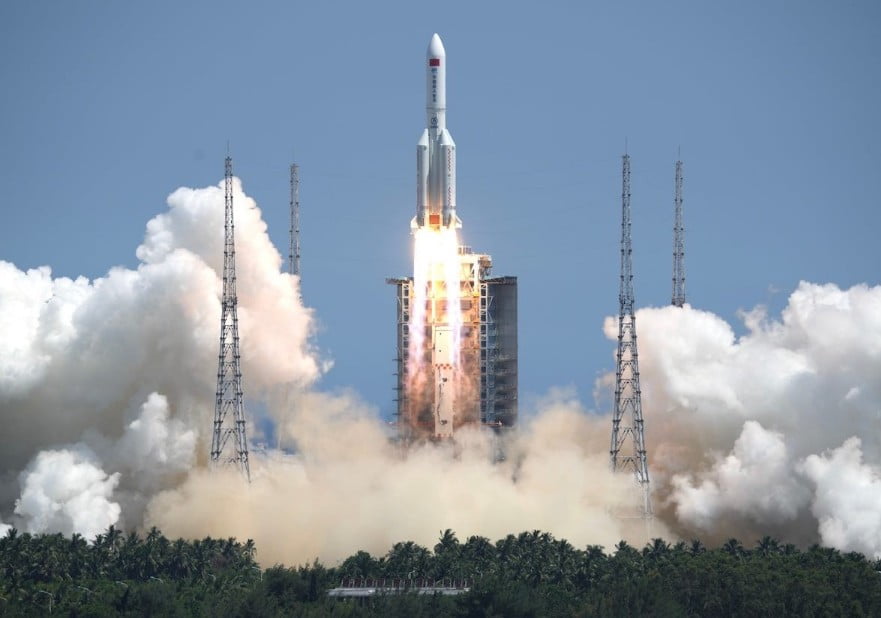 A massive booster from the Chinese Long March 5B rocket, launched on July 24, 2022, is expected to re-enter Earth’s atmosphere over the weekend, with some of its pieces surviving the descent and hitting the surface. The rocket delivered the Wentian experiment module to China’s Tiangong Space Station.

While this debris has considerable size and weight (56 m / 183 feet, weighing 22.5 metric tons), the chance of some of its leftovers hitting anyone on the ground is very slim.

However, since there might be 5 to 9 tons of debris hitting the surface and because previous boosters from this type of rocket hit populated areas, a major concern is developing worldwide.

“Due to the uncontrolled nature of its descent, there is a non-zero probability of the surviving debris landing in a populated area,” Aerospace Corporation, whose space debris experts are tracking the re-entry path, said.1

“Over 88 percent of the world’s population lives under the reentry’s potential debris footprint. If this sounds familiar, it’s because similar uncontrolled reentries of Long March rockets occurred in 2020 and 2021.”

In 2021, the rocket body of Long March 5B rocked crossed several populated areas and landed in the Indian Ocean near the Maldives. But in 2020, it dumped debris off the Ivory Coast and scattered metal pipes and other material across several villages. Luckily, there were no injuries.

This stage and its two predecessors, launched in May 2020 and May 2021, are the sixth-, seventh-, and eighth-largest objects to ever reenter, Aerospace Corporation said, adding that the list of other comparably-sized objects that have reentered includes early space stations — like Mir, Skylab, Salyut 6 and 7 — and the Saturn V second stage that launched Skylab. These represent a mix of controlled and uncontrolled reentries, however.

“Generally, for an upper stage, we see small and medium tanks survive more or less intact, and large engine components. The large tanks and the skin of this core stage are likely to come apart. We will also see lightweight items such as insulation fall out. The melting point of the materials used will make a difference in what remains.”

At this time, it’s impossible to predict where the pieces will land but reentry will be along one of the ground tracks shown in the image below.

The booster entered the atmosphere over the Indian Ocean at approximately 16:45 UTC:

1 Another Uncontrolled Chinese Rocket Body is Plummeting to Earth. Any Questions? – The Aeropsace Corporation – July 26, 2022