The passage of Tropical Cyclone "Ana" together with the Intertropical Convergence Zone (ITCZ) caused prolonged heavy rains in Madagascar, leaving at least 34 people dead and more than 64 000 affected. Ana is the first named storm of the 2022 Southwest Indian Ocean cyclone season.

Together with the passage of ITCZ, Ana caused severe floods and landslides in Madagascar, affecting more than 64 000 people in 7 regions.

More than 58 000 people were affected in Analamanga Region, mainly in Antananarivo-Renivohitra districts. 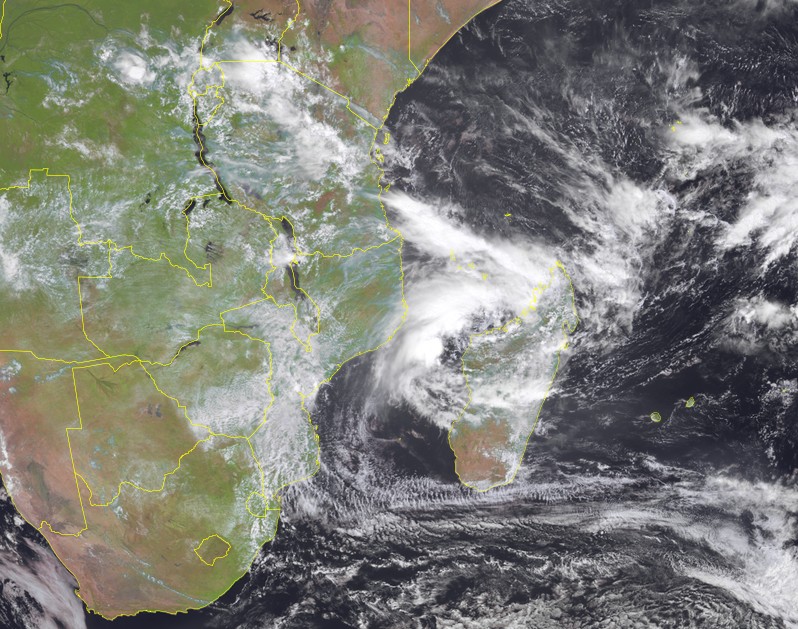 At least 10 people lost their lives from January 17 to 19, and another 24 during the weekend. Almost all fatalities took place in the capital, where traditional houses collapsed.3

More than 6 800 homes are underwater and many others are at risk of flooding or collapsing, forcing nearly 39 000 people to evacuate (27 000 over the past weekend due to Ana).

The government continues to carry out preventive evacuations in Antananarivo, which is on Red Alert for further flooding as the levels of rivers are increasing and reaching the emergency threshold.3

The Red Alert for floods has led the Ministry of Education to extend the suspension of classes in the Analamanga Region and other areas until January 28.

The rains have also damaged roads and other infrastructure in the Analamanga Region, including the water intake structure of the treatment station in Ambohidratrimosome District.

Some parts of the national road connecting the capital to Ambatondrazaka, in the east of the country, were also destroyed, impacting transport in and out of Antananarivo.

After making landfall in Mozambique, claiming the lives of at least 2 people and injuring 49 in the province of Zambezia, Ana continued moving W across southern Malawi, further weakening and dissipating but still causing very heavy rains.

Mozambique's National Institute for Management and Disaster Risk Reduction said two people had been killed and 66 injured, while 546 homes had been partially destroyed and another 115 completely destroyed.

Government and UN agencies estimate that 500 000 people may be impacted in Mozambique's Nampula, Zambezia, and Sofala provinces.4

Flooding caused by Ana was also reported in Zimbabwe and Malawi on January 24 and 25.

Floods in Malawi killed one person and forced Electricity Generation Company (EGENCO) to shut down all its power plants, leaving only 30% of the country's installed capacity and causing widespread blackouts.

EGENCO spokesperson Moses Gwaza said Tuesday he is uncertain as to when the machines may resume generating electricity, but was optimistic that electricity may by back by Wednesday morning, January 26.

The Kapichira hydropower station was damaged particularly bad, EGENCO said, adding that the intake dam structure had been partly washed away during flash floods.5

Search and rescue operations are underway in the town of Chikwawa.

According to the Malawi Red Cross National Response Team member Chawezi Tembo, there is urgent need for airlifting evacuation as water levels are still rising due to continued rainfall.

In Chikwawa, search and rescue operation is underway. According to @MalawiRedCross National Response Team member Chawezi Tembo, there is urgent need for airlifting evacuation as water levels are still rising due to continued rainfall. Number of people trapped not yet known. pic.twitter.com/0p7PURusEi

He was however optimistic that electricity may be back by tomorrow morning.

The death toll in Mozambique and Malawi rose to 12 on Wednesday.6

8 people died, 54 had been injured and 895 were evacuated in the prior 24 hours, Mozambique's National Institute for Management and Disaster Risk Reduction said.

More than 20 000 people in Mozambique have been affected by the storm, with more than 3 000 homes partially destroyed and over 600 totally destroyed along with several health centers and dozens of classrooms, the institute said, adding that drones and boats had been deployed in relief efforts.

The death toll in Malawi rose from 1 to 4.

Officials and aid agencies are still assessing the full impact.