Widespread flooding is affecting South Australia after parts of the state received more than a year's worth of rain in just three days. Severe thunderstorms with heavy rainfall are expected to continue this week.

The Australian Bureau of Meteorology (BOM) senior meteorologist Kylie Evans said there were a number of daily rainfall records set, including 181 mm (7.12 inches) at Winter Springs near Cowell, and 160 mm (6.29 inches) in Kimba, both on January 21, and 86 mm (3.38 inches) in Kadina on January 23.1

This rare rainfall event has been attributed to a slow-moving upper low pressure front across the Great Australian Bite, with a deep tropical moisture and a surface trough.

Dryland grain grower Leigh Fitzgerald has recorded 320 mm (12.59 inches) of rain on his farm in Buckleboo on the Eyre Peninsula in three days to January 24 – beating his usual annual average of 300 mm (11.8 inches) in just three days.1 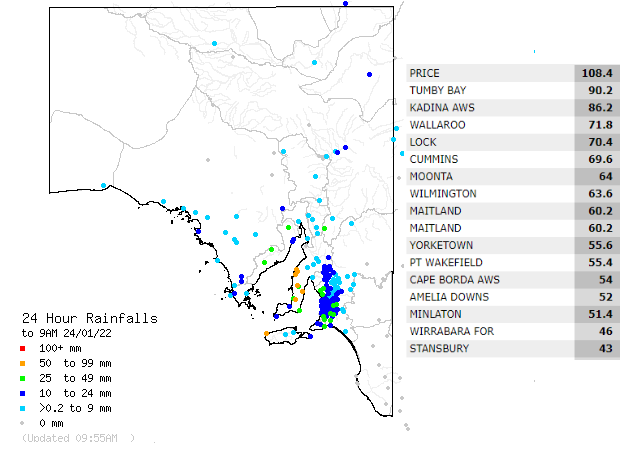 A number of roads were flooded or destroyed in the Far North and Eyre Peninsula after record rainfall hit the region, the South Australia Police reports.2

Entire towns were cut off from the rest of the state.

We’ve had reports properties are being impacted by floodwater due to vehicles causing waves over sandbags being used to keep the community safe
Please drive to the conditions. Stay safe by never driving through floodwater
SES: 132 500 Life-threatening emergency: 000 pic.twitter.com/hxesgx9Yz7

Traffic Alert As you all know there has been record rainfall in the #FarNorth and #EyrePeninsula in recent days, which has caused a number of roads to be flooded or destroyed. Follow link from @DFIT_SA for the latest road closures: https://t.co/fE3GFA4tle pic.twitter.com/QEBJs9fVAO

After three days of heavy rainfall, a rare whirlpool formed in the remote outback:

BOM's Kylie Egan said the rainfall event was rare and significant, with a huge impact to South Australia. "It's something we don't see every year," Egan said.